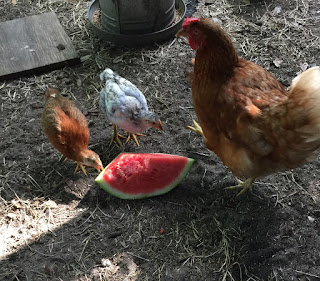 Joe Biden's son died. I think of all the losses that Biden has had and I feel humbled. His first wife, his one-year old daughter. Now his son. My heart goes out to him, to the whole family. Biden has always struck me as someone who knows what's important and what is not. I think he learned that the hardest way.

Another famous politician's son, Michael Reagan, has written a piece about the Dugger family situation which I found to be absolutely spot-on, despite the fact that Reagan usually espouses views more conservative than those of his famous fumbling father.
That piece can be found here.

And really, I don't have much else to say. I have no plans for today and the huge Sunday morning breakfast has been made and eaten and Mr. Moon has washed the dishes. It looks like it might rain and that would be lovely. Lily texted me this morning that she had found an amethyst necklace that I gave her when she was pregnant with Owen which was a bit startling to me in that I had just been dreaming of amethysts. I do honestly believe we have senses we are not aware of and that one day, science will figure those out and they have no more to do with the woo-woo or voodoo than the senses of sight and sound but that they have helped ensure the continuation of the species, not unlike the chicken.
And chickens are so very much not woo-woo or voodoo but plain old fact and feathers and yet, miraculous and wonderful at the same time.

And since it is Sunday, and thus the High Holy Day, we here at the Church of the Batshit Crazy must do our holy duty and report in on the Rolling Stones. They played last night in Columbus, Ohio and so of course I had to go look for reviews and the one I read here, written by Chuck Yarborough, was one of the best concert reviews I've ever read in that it sounds like something I would write.
My favorite line was this one:
"Mick Jagger, who hasn't gained an ounce since the doctor snipped his umbilical cord 71 years ago, remains the consummate showman."
So if you want to go read a review of the Rolling Stones show in Ohio last night, you have the link. 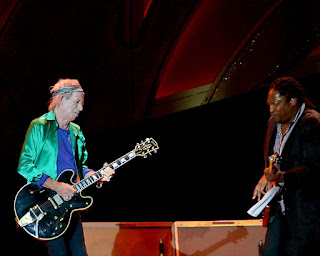 And there's a picture of our Holy Totem Spirit Animal, our Good Saint of the Light and Darkness, Keith Richards, and Darryl Jones, the Rolling Stone's bass player. The review noted that Charlie Watts even smiled last night and so you know it was a good night for our boys. Our lovely old boys.

Be well, y'all. Sundays can be tricky.