I have had a pretty darn good day. You?
I did get that gardenia transplanted and I also got to talk to a very old friend of mine whom I haven't talked to in years and years. As these things do go, we picked up as if we had talked just last week and ended up laughing a lot. He's going through some tough situations and I told him, "You know, five or ten years ago I would have had all sorts of advice for you. But I don't do that anymore."
And I don't. Mostly.
I'm old enough to know that we all face things, experience things, do things that no one else can really say squat about because we don't know what it feels like to be in that person's skin. And my friend didn't really want my advice. He just needed to talk and talk we did.
And it was lovely.
I think we both felt better when we got off the phone, just for having shared some stories and laughed about some memories and reminded each other that we still love each other.
And we do.
Time doesn't change everything.

Then I mopped the kitchen and I almost don't want to walk on it because it is so pure and pristine. Mr. Moon has gone to auction and I sent him a picture and said, "Just want you to see the floor while it's still clean."
I've said it before and I'll say it again- clean floors are like clean sheets for the feet. 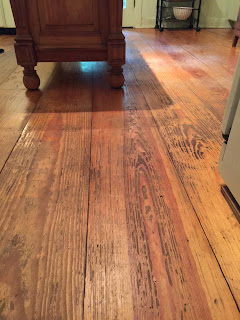 Then I took a shower and went to Owen's last T-Ball game of the season. Those little guys have made so much progress in the last few months. It's almost unbelievable. I mean, it's still completely adorable to me when the pitcher gets a bit distracted by squatting in the dirt and drawing pictures instead of attending to business but mostly, they understand the basics of the game now.
Precious, precious, precious.
Speaking of precious, here's Lenore. 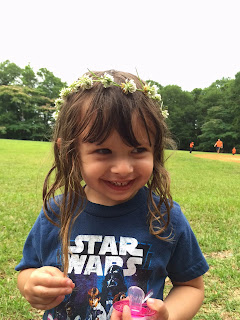 May and Michael came to the game and May told Lenore to pick clover and that she would make her a fairy crown.
And she did.
Could that child BE any more darling?

And so the T-Ball season is over. There will be a pizza party on Thursday night. The chickens and duck are all put up and safe. The babies still make their little twittering noise and still sleep underneath their mother's wings. My kitchen smells like vinegar and Fabuloso. I have good tired aches in my legs and hips.

I feel at peace. I hope you do too.