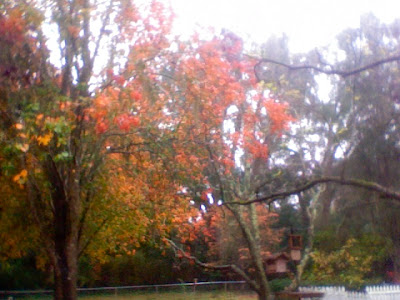 Mr. Moon took the camera to Tennessee and so I am left with the little camera on the MacBook and that picture above was taken with it behind the screen of the back porch, thus presenting an even worse photo than I usually manage. It's raining so I couldn't take the MacBook outside and so there you go. It's a poor representation of the bright oranges and yellows and golds in my backyard, but it's the best I can do.

It's raining that slow drizzle that tells you to crawl back in bed, or at least onto the couch, and even the dogs are affected. They are doing some serious napping and Zeke, the smallest dog and the one who sleeps with me, didn't stir all night and I overslept this morning, which is something I NEVER do and awoke in a mild panic, one half hour before I was supposed to be at yoga.
Oh well. I called my yoga teacher and since it was just going to be the two of us, it would be no catastrophe for me to be fifteen minutes late, which I was.

I finished up rereading and checking the novel yesterday and sent it on where it was received and put into the reading queue. This publishing company is so small that I believe they only put out one book of fiction a year so my odds are more than slim and I am told that I'll get no response for 6-9 months so let's not hold our breaths. Who knows, though? I may be buoyed up enough to search out other small regional houses and send it out to some of them. Why not? What can it hurt?

It's been a pretty good week being here on my own in Lloyd. I haven't been lonely for a second and I've had no more dreams about losing babies or dogs although I have had some other ones so strange that I will keep them between me and my god, and last night it was the old hair-falling-out-in-great-hanks dream which, as sucky as that is, is far better than the teeth-all-falling-out-dream.

Hey! I know I'm getting old, brain! No need to remind me.

I was talking about that to my yoga teacher today. It seems to me that we've been sold a bill of goods on the old age-is-just-a-number crap. You're only as old as you feel, say the advertisements for the miracle creams and fiber-rich cereals and I have to say hell, yes, and some days I must be ninety-seven. I am most certainly NOT thirty-four and every day seems to bring a new ache or pain and I have to wonder whether it will be one of those things which mysteriously appears and then just as mysteriously disappears or whether it will become part of the whole bag of stuff that I suppose I am just going to have to put up with for the rest of my life.
One never knows.

And I often wonder what it would be like to suddenly be able to switch bodies with someone else, to feel what they are feeling, and then to switch back. I think we'd all have more compassion for what others are going through. One of my daughters was hit by a car at the age of fifteen and will always carry the pain of those shattered bones, no matter how long they have been mended. She doesn't complain much but I think it must take an awful lot out of her and I feel guilty when I complain to her about my little bullshit aches. I would probably be seriously shocked if I could feel what her leg feels like all the time, or especially when the weather is like this, so damp and chilly.

I am a whiner and a complainer and I know that. I have no idea what my pain tolerance level is. How could I? I have nothing to compare it to. But I suspect it's rather low. This is one of the reasons that when I talk to other women about childbirth I always say, "Look, if I could do it without drugs, so can you," but then I hasten to add that if I had been in a hospital situation while giving birth, I would have been SCREAMING for drugs so take that into consideration as well. I mean, I did instruct my husband to go get the big knife and kill me with it while I was in labor with my third child and I was deadly serious and was disturbed and angry that he did not do what I had said, but allowed me to go on, having one contraction after another.
Compassion? I don't think so. He did say that he would gladly take over for me if he could have, but what a cheap offer that one is.

Anyway, I have no real theme here today. It's gray and it's rainy and the venison jerky is drying in its little plastic tanning bed and I need to find the seam ripper so I can rip out the last bit of embroidery I did on the Levi jacket I've been desultorily working on for months. I've last the little bastard which leads me to what I should really do, which is clean the house and try and create some order but I do not feel motivated for that sort of work.

I'm going to get a massage this afternoon- something I do about twice a year. Maybe. As much as I love it, it of course makes me feel guilty on so many levels. Paying good money for such an exquisite selfish pleasure just seems to go against everything in my genes. My puritan grandfather probably rolls in his grave every time I lay my body on a massage table and give myself up to the blessed hands of a healing woman. I always think of the people who touch us who are not loved ones or friends. The nurses, the hair stylists (ah- the soothing shampoo with the warm water and busy fingertips on our scalp) the manicurist, the massage therapist. It feels so strange to pay money for pleasure and I am not insinuating anything here. I think all of the people who touch us in their work, literally touch us, are blessed and I celebrate them and their touch and truly believe they're doing god's work, especially for the people who get no other human touch in their lives.

Anyway, I am going to go lay my body on that table and it's going to be so good that it will overwhelm the guilt I have and be worth it in every way. Perhaps it will even help with the small but tenacious achy problems I have that cause me to reach for the Ibuprofen far more than I should.

And I'm happy. My life is rolling along fairly well right now. I am doing things with friends, I have lines to learn for the play, I sent the book in, and for the moment, at least, I am completely ignoring Christmas.

How are you doing? What do the leaves look like where you live? Are there leaves at all on your trees or are they bare and covered with snow? What is making you happy and who has touched you lately on the back of the neck, on the tight muscles of the shoulders, or on your heart or your soul?