Christmas Is Coming, My Ass Is Getting Fat (and other things I want to talk about) 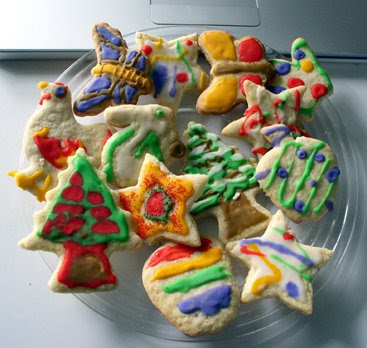 So I woke up this morning not exactly imbued with the Christmas spirit. What happened? Did the tiny tender bud of joy get nipped during the night time? Did the ghost of Father Past visit me in my sleep and sit me down to tell me that he'd cursed me for all times and to forget about slipping out of the bonds of bitterness?
Who knows?
Not me.

So what the fuck do I know?

I am going to go try and find a tiny cedar tree in a pot to decorate. Fuck all. I like trees a lot and if you haven't read Miss Maybelle's post about hers, then please do. I am a bit loathe to mention this here because she made me sound like some sort of saint, which I definitely am NOT but she maybe is and she loves her Christmas tree and gives me reason to want one too.

I made some of the best soup last night I've ever made. It had in it: chicken, deer sausage, corn, celery, onions, garlic, red pepper, green beans, lentils, brown rice, noodles, broccoli. Among other things that I have forgotten. Oh yeah, green taco sauce and cilantro. It was a sort of Mexican gumbo with no seafood. Because I had no leftover seafood to put in it or surely I would have.

That study which showed that the happier your friends are, the happier you'll be is true. One of the things that got me through my terrible, dreadful, horrendous time of insanity last summer was the fact that I had a few friends who have sunny dispositions who refused to leave me alone and let me melt into a puddle of crazy. I will never be able to repay them.

Say what you will about George Bush, he has really fast reflexes.

Say what you will about George Bush's reflexes, he's really lucky he's only had shoes thrown at him.

Say what you will about the guy who threw the shoes, that thing he said when he threw them was so perfect that I sort of want to put it on cards and send them out for Christmas.
Here's what he said:
"This is a good-bye kiss, you dog!"

Mr. Moon and I ate an entire household's worth of cookies which were brought as a gift by our company on Friday in two days . These were amazing cookies. I think they had crack in them. We are now calling the friend who made and brought them "The Evil One."

The sky last night when I was coming home from play practice was so amazing that it made me desperately wish I was on Dog Island so I could see the entire thing without hills and trees blocking any part of it. It was one of those sunset skies that would cause a person to invent religion if it hadn't already been invented.

Speaking of religion, I learned something on Saturday while attending a hospice luncheon where my mother was being honored for fifteen years of volunteer service: More hospice volunteers than you would imagine do not close their eyes during prayer. Some of them will even make eye contact with you and smile a little bit while the prayer is going on, which is unusual. Usually the non-eye-closers will just look down at their plates or something but these guys were looking everywhere.
Make of this information about hospice volunteers what you will.
I think it means that people who are not afraid to stare death in the face are not afraid to stare a blessing in the face, either.
And by the way, those people ARE blessings.

I know a lot more stuff but I can't think of any of it right now or maybe it's stuff I don't need to talk about and besides, I have written about enough stuff.

Oh- one more thing (and again, I am loathe to mention this but what the hell?) - Aunt Becky of the Mommy Wants Vodka blog, has nominated me for a Blogger's Choice award in the "Blogitzer" catagory which has something to do with good writing and I don't even know what to think about that. The world-famous Dooce has been nominated in that catagory as well (and probably every other catagory, too) and just to have my name (and ten thousand others, too) in the same catagory is like, well, if not like dying and going to heaven then at least like sleeping and waking up to find that all the dishes were magically washed in the night and that the dogs all disappeared at the same time. I am incredibly honored and would like to thank all the little people.
Oh wait. I AM the little people.
So if you want to vote for me (or Dooce- your choice), go click that little button up there on the top right-hand side of my page.
(Yes, Magnum, I am selling out although as far as I can tell, you get nothing but the soul-satisfying satisfaction of having been nominated but that's plenty for me.)

And I have a question: What's the most fun game you know of to play with a bunch of people? I want to get a new game for the family to play on Christmas after we eat our breakfast of pastry and eggs, etc. and I don't want to waste my time or money trying to figure out what to buy. So if you know of a game which is rollickingly hilarious and tons of fun, please let me know.