What I Did Instead Of Christmas Shopping 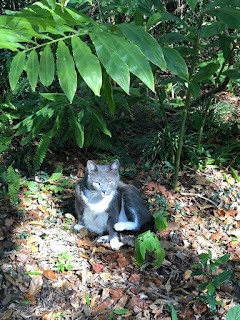 That's Jack. The "sweet" cat. He doesn't look very sweet right there, does he? He is sweet when it comes to allowing affection from humans, including the grandchildren who love him. Maggie especially. But then again, she loves animals so much. She'll beg her mama to stop the car if she sees a dog so that she can pet it. Here's a picture that Lily sent a few days ago of Maggie and Sammy. 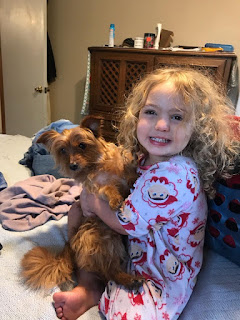 Lily said, "She just won't leave that poor dog alone."
I responded, "She's squishing him with her love," which is a family saying. A long, long time ago May was hugging Jessie who originated the phrase. She told her sister, "May, you are squishing me with your love."
This seems to happen frequently around these parts. Squishing people with our love is what we do best.

I took a picture of Maurice last night. 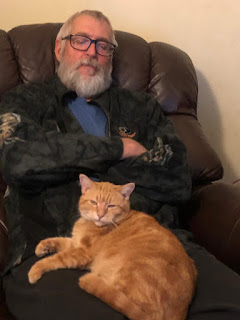 She loves Mr. Moon. She sits on his lap and if he tries to move or even change position in his chair, she gives him the warning meow and sometimes scratches him. But I took that picture because it seemed to me that she was saying that if I so much as got one inch closer to her man she was going to do something I'd regret. Maggie is not so fond of Maurice. She calls her "Scratch." All of the children know to keep their distance from her. She does not suffer children gladly. Or adults either, for that matter. Sometimes, just because I love her even though she's practically feral, I'll give her a nice, quick little hug, being sure to pin all her limbs with my arms so that she can't take one of them off and leave me with a bloody stump. She acts like she doesn't like it and makes that warning noise but I'm convinced she does indeed like it.
Because I'm a fool.
The other day in the garden she came over to where I was weeding and rolled onto her back which in a normal cat would indicate that some belly-rubbing would be appreciated. I made the mistake of forgetting she wasn't a normal cat and reached down to give her a little scratching and she responded by digging her claws into my hand and drawing blood. I screamed. She leapt away and I may have cursed her.
Okay. I did curse her. And she looked at me like I was the demon in this situation.
Well, what can you do? I still love her. She just has some serious issues.

It's been a pretty nice day. I upped my walk milage today. Feels good.
And then I came home and did a lot of outdoor stuff because it was so beautiful. Just a clear cool day under a fine blue sky. I started out with the kitchen porch because it was a mess. That dang hen that's been sleeping in the fern pot had pooped all over another plant, making it the most fertilized succulent in the world. So I cleaned the poop out of that pot and put it on the front porch and moved the fern and replaced it with a little miniature rose in a pot which has been languishing under the bananas. I trimmed back a few things in that bed and then I swept the front porches and watered all those plants. I think they were happy. I have SO many porch plants. Way too many. I have reached porch-plant capacity. I sent a picture to Jessie. 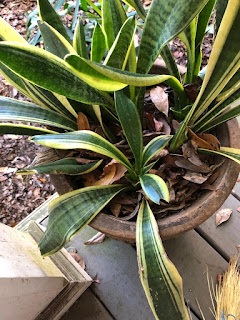 She's in a houseplant mood and I told her that I have so many plants I'd like to share with her. That one is a snake plant and it's sort of a joke between us. When she and Vergil first moved in together in a darling little house in Asheville, I told her that a snake plant by her fireplace would be perfect but she laughed at me. I think she thought of them as an old lady plant. I still say I'm right.
But yesterday, when we were at the nursery, she told me that now she wants a snake plant. We both laughed. I would be happy to share some of this one with her.

After I got all of that taken care of, I moved on to a little bed beside the shed where there is just too much going on. There's a spirea that I transplanted because it was in a place that was too shady for it to bloom, a rose, a tea olive that Mr. Moon moved from by the back porch because it was causing water to splash off it and rot the wood, and also some sort of gingers that I stole from an apartment building where they were growing like crazy by some steps. I think that May was living there then. Although who knows? Lily also lived there for awhile and so did our friend Anna. In fact, Karen and David lived there back in the seventies but that has nothing to do with this story. The lilies have never bloomed but their foliage is quite lovely so I don't hate them but they'd almost choked out the rose and the tea olive so I dug them up and moved a few to another bed and tossed the rest on the burn pile. I'm thinking I might move the rose to inside the garden by the fence. It seems like it would like a fence to support itself. I didn't do that today because it's blooming, as I mentioned the other day. All the roses are. I don't have the heart to cut it all back to transplant it but I will be doing that eventually. It's a sweet rose, an heirloom. It smells exactly like a rose should smell which is why I bought it.

That's what I've done today. Mr. Moon is at some sort of duck-hunting group's annual dinner so I'll be heating up some leftovers. Last night's bread was delicious. Quite possibly the best loaf I've made so far. It had a very long rise and I didn't bake it as long as I usually do and it was soft on the inside and crusty on the outside. My man may actually be leaving as early as tomorrow night to go back up to Tennessee to do a little more hunting with his friend up there. The credit union where he's got his office is having their holiday party on Saturday night and I would love to have a good excuse not to attend it. I don't have anything against the credit union or the staff there. I just don't know any of them and, well...party.
So far this season, no animals have been harmed by Mr. Moon. He's a very careful hunter and doesn't take a shot unless he's sure that he's aiming at something he really wants and that he's sure he can take down instantly. As I've said a million times, I never thought I'd be married to a hunter but I am and I have come to appreciate the meat he brings home. No factory farms involved at all. And it's good meat. Clean and pure and with so little fat in it that I have to add some olive oil when I cook it.

And that's it from here. I did listen to some of the impeachment stuff today and whenever the Republicans insist that the Democrats have been wanting to impeach this president since the election I just think, "Well, yeah. Of course."
I tell you what- if all of those anonymous folks who reportedly talked about invoking the 25th amendment would have actually had the balls to come forth and be witnesses about how unfit for the presidency Trump is, we wouldn't have to be going through this shit.
But here we are.
Here we are.
Meanwhile the pickled orange intestine is over in Europe embarrassing the hell out of our country and tweeting things like this. 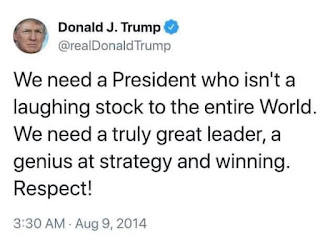 Ummm.
Yes. Yes we do.
Resign, you motherfucker. Resign.

A girl can dream.