I Wish I Knew

The only picture I took today was of Owen using the grinder to make ground venison. And I don't know, but I'm pretty sure that scene offends some readers. The vegetarians, the vegans, the people who feed the deer in their yards.
And I don't blame you. I mean- if forty years ago you'd told this hippie vegetarian girl that she'd be using ground deer meat to make her spaghetti, she would have been horrified.
But it is a cute picture of Owen.
And like I say- if you're going to hunt and if you're going to eat meat- know what turns it from animal to supper.

I am torn about the whole situation. I am. But the reality of the situation is that the men in my family hunt for deer and we eat the meat.
Speaking of venison spaghetti, I have some sauce simmering right now. Besides venison it has cauliflower and olives, capers and onions, peppers, mushrooms and cherry tomatoes. Also spinach.
One of my favorite kinds of suppers- boil some pasta, put it in a dish, add the sauce.
Voila!

So what I did today while Jason and Mr. Moon and Owen cut up and ground up deer was to finish Maggie's nightgown and to wrap most of the presents. Doesn't sound like much, does it?
Well, it wasn't.
But somehow it took all day.
I am the world's worst present-wrapper. No, really, I am. It took me hours to gird my loins enough to go upstairs and get the giant tub of wrapping paper and boxes and ribbons and bows and tags but I finally did it, descending each stair slowly and carefully because those stairs scare the shit out of me. I find it hard to believe that no one has ever fallen down them and broken their neck. And it quite possibly has happened but no record of such an accident exists. I really do wonder and am quite curious as to all of the things that have happened in this house.
Births and deaths for sure.
The house was already here during the Civil War and so quite possibly it was used in some capacity while that was going on. The guy we bought the house from claimed that at one point the house was being used as a bordello but I think he's full of it. I mean, it's possible. We are a block away from what was a main highway before the interstate was put in but I'm pretty sure that old Mrs. Miller who used to live in this house before she moved across the street would never have allowed that to happen.
But yes, certainly births and deaths and sickness and health. Music and dancing and kissing and fooling around. The sweetest words, whispered into a lover's ear, the cruelest words hurled across the space of the kitchen.
You just know that a good many of the things that can happen to humans have happened here.
I wonder about the pets, the dogs and the cats and birds in cages that have sheltered here. I wonder about the quilts stitched here. I know for a fact that there used to be a quilting frame in the hallway and women would come and sit and sew together. I wonder about the meals cooked here. I wonder about the gardens grown and the animals raised for food and for farm work here. I am curious to know what it was like when the house was first wired for electricity and the first light switch turned on. Same with what whoever was living here at the time felt when indoor plumbing was introduced or when the first automobile pulled into the yard.

And in the almost sixteen years that we've lived here now, I've witnessed and been a part of some of it. Courtships of my children, Vergil asking Jessie to marry him in the back yard under the oak tree. Babies learning to crawl and then walk down the long hallway. I've made so many meals, I've raised and tended my own chickens and we've gardened a bit. I've added to the landscape with camellias and palm trees, we've had parties and music and I've gotten more than one grandchild down for naps with stories and songs and back-scratching. There have been weddings and there have been wakes. There have been tears of joy and of despair and of gutted grief, words of promise and words of hot anger.
But not too many of those.
I have slept so sweetly here.
There has been love-making and there has been hallway dancing and this house, this little piece of earth it sits on, has taken it all in, offered its spaces up to every bit of it.

And how the hell did I get from gift-wrapping to that?

I have no idea. It's been a rambling, rainy day. It's raining now. It's supposed to rain all night and tomorrow too.
The bed has been made twice.
A ten-year old boy has helped his dad and granddad prepare food that will eventually feed us all.
I didn't check eggs all day but when I went to close the chickens up, I found Sissy sitting in a nesting box and when I checked under her, I found these. 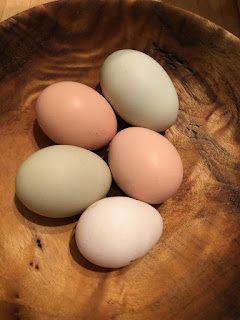 She pecked me so hard that she drew blood as I so cruelly took the eggs from underneath her. I don't know whether she was just pissed at being disturbed in her night-sleep or whether she was defending a nest she feels compelled to sit on. I would happily let any hen go broody and hatch eggs except for the fact that so many of them seem to turn out to be roosters.
Well. We shall see if she seems to want to go through the tremendous sacrifice of sitting on eggs. I suppose that if she is absolutely determined, I'll let her. Not like I can stop her if she takes a mind to do it. She'll just nest somewhere I can't find her.

I figure that this will be my house's 160th Christmas.
I like thinking about that. It takes some of the pressure off of me. Why even bother thinking that I could possibly be the worst or the best at celebrating Christmas day?