The Christmas Family Feasting Has Begun 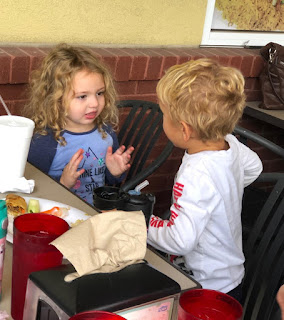 Maggie explains it all to August.

I am tired, tired, tired, TIRED!
It's been a long day but a good one. Almost the entire family got together at Tan's because...well, of course. And we had to discuss what our plans are for Christmas Eve and Christmas morning. And Hank and Rachel are going to be in Georgia with Rachel's mom for Christmas and so we all needed to touch base and hug.
And hug and hug and hug.
Good Lord.
When we were leaving, we'd already gone through one series of hugs and another began because, as May said, "Those hugs already wore off."
We're insane.
But I like us.
Yes I do.
Only Vergil and Jason couldn't come but Mr. Moon was there, and Michael and Hank. So the men were represented. 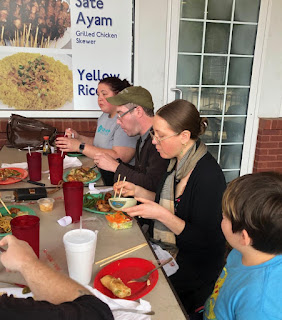 As I've said so many times, I do love Tan's. We all love Tan's. One of the things I love the most about it is the woman who runs the place. I've spoken of her before. No matter what's going on she is cheerful and friendly. Today was the first day she'd met Mr. Moon and she made sure to tell him that I often pay the bill for the children.
"Not always!" I said.
"No, but sometimes," she said, laughing.
Her accent is so perfectly perfect that I can imitate it which is probably completely wrong and I mostly only do it in my own head and it's not to make fun of her, it's to try and capture the lilt and beauty of the way her words slide up and down the scale.

So we ate our Asian Fusion foods and August had to sit next to Boppy and Maggie wanted to sit next to August although at first August had wanted to sit by Owen too which resulted in some tears from Maggie and then a compromise with August and Owen who changed seats so that everyone could eat their broccoli and chicken-on-a-stick in perfect harmony. 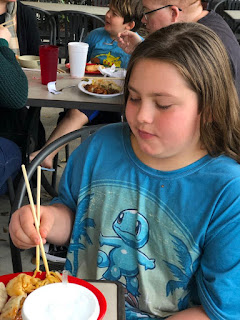 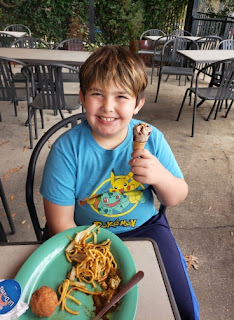 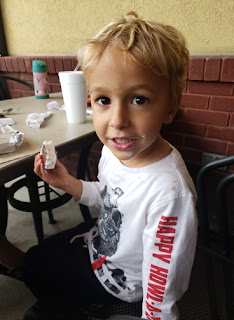 Of course what the children like best about Tan's is the ice cream freezer.
Magnolia wrapped up her Klondike bar after she'd eaten half of it to take home. It quickly became apparent that it wasn't going to make it home in its ice cream state so she unwrapped it, put her face down and licked it up.
"Girl, your tongue isn't long enough to do that," I told her.
She didn't care.

So after we'd all finally finished and paid our checks I went to the liquor store and Costco and Publix. I wanted to get Mr. Moon some Bailey's Irish Cream but it was about a million dollars at the liquor store so I bought it at Costco where it was only half a million dollars. He loves that sweet stuff and it's a tradition that he has some in his coffee on Christmas morning. I also got food for tomorrow night's Christmas Eve appetizers and cocktail party. A veggie platter, chicken to make into the Moon Traditional Chicken Salad with grapes and pecans, hummus, crackers, chips. And I have the ham already and also some salmon.
And I did not forget to buy things for Christmas morning including bagels and sweet rolls.
Phew!
We are going to die.
Well yes. Yes we are. But hopefully not because of all of this food.

I came home, unloaded everything, put it all away, started cooking the chicken, made up the dough for a loaf of sourdough for tomorrow night, unloaded the dishwasher, folded clothes, put more clothes in the dryer AND in the washer, and started some rice for our dinner tonight.

You know what I was doing on December 23rd last year?
Looking at this. 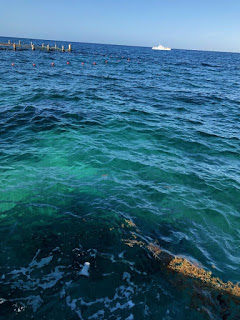 And what was I eating? 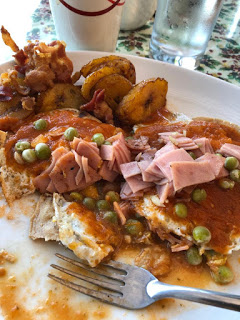 Well, that's okay. I was there, now I'm here.
It's all good.
Relatively.

Owen asked me today what I wanted for Christmas.
"A house on the beach in Cozumel," I said.
"Me too," he said.

I love that boy.