A Lot Of Food Talk Amongst The Other Stuff 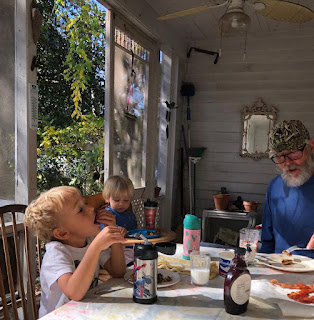 The man is home and this morning pancakes were made and two little boys came over to partake in love and carbs. They got plenty of both. I really do not know how such small humans can eat so many pancakes. And these are not light pancakes. The ones this morning were made with flour and buttermilk, oat bran and ground flax seed, grated apple and sweet potatoes and banana.
Sturdy pancakes for sturdy boys who surely were happy to see their Boppy. They both had to sit by him on the porch where we ate our breakfast on the prettiest, sunniest day. This weather is spoiling me.

So yes, Mr. Moon got in last night just a little after 11:00. I was already in bed, snuggled in with Jack who didn't even look up although I hear that he tried to sleep on the man's feet all night. That cat. I was so glad to hear the kitchen door open and know that my husband was home. He came in to the bedroom and gave me kisses and then took a shower and got into the bed and sighed.
We do have the most comfortable bed in the world.
He spent a lot of time this morning unloading the truck and he's been busy all day, playing with the boys, putting things away, going to town to get ice to put on his deer, and now he's vacuum sealing Tennessee smoked bacon into serving sizes to go into the freezer. He did get a little bit of a break watching some TV with August and Levon. 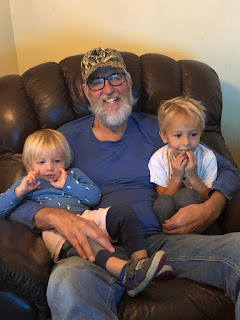 Levon now insists on sitting in the chair with Boppy and Auga. Do you like his outfit? He is picking out his own clothes these days and he is inordinately fond of pink shorts which he likes to wear over long pants. I think that it's a good look. I admire his bold style choices.
There wasn't too much time spent watching TV. The beautiful day called to them to go outside and they did. They talked Boppy into letting them play in the camper van where they pretended to be...camping...of course.
"It's nighttime, now!" said August.
"Nighttime now," said Levon.
And then they had to play in the boat and Levon did a little shoveling, too.

When it was time to go they both wanted a leftover pancake for their going-home treat. Seriously? August wanted butter on his and you know I buttered it.

After they left I did some laundry and weeded a bit in the garden. Things are coming along there, although slowly. I think I can get a salad out of it tomorrow for our supper. And then I worked a little more on Maggie's nightgown which suddenly, looks like a nightgown. 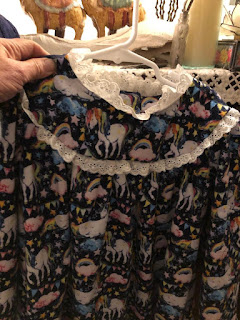 I hope she likes it.

And so that's how Sunday has gone. I'm listening to a book, The Dearly Beloved, by Cara Wall. I am not sure how I am going to feel when it ends about the author's belief in god, but I know quite well how I feel about her writing- it is luxurious. She reminds me a bit of Barbara Kingsolver or Ann Patchett. It's a debut novel but it surely does not read like one. As I always say, I love it when I start a book and know immediately that I am in good hands- that the author knows exactly what they're doing. Cara Wall knows what she's doing as she explores the subjects of religion, faith, doubt, love, loss, politics, academia, friendship and more. Just thought I'd drop this in here in case you see the book on the shelf in your local library or in your audio book app. Even though as I said, I haven't finished it, I don't think it would be a waste of time to choose it.

I have soup simmering. I have last night's bread waiting to be warmed up. I am feeling no more sure about my place in the universe than I did at age fourteen.
Okay, maybe a little more but not nearly as much as I thought I would be at the advanced and astonishing age of 65.
Well, I thought I'd be dead by now so that's not entirely honest.
Still, it would appear that no, older age does not make everything clear and/or easy. Not one damn bit.
I have learned recently that parchment paper may be the answer to life.
Or at least to a lot of things that go on in the kitchen. Why did it take me so long to learn this?
I do not know.
Really, I don't know shit.
Obviously.