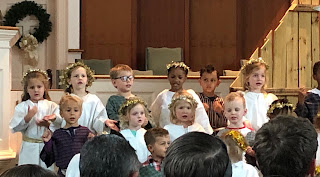 Well, not only did I set foot in a church today but while I was there my Grinchy old heart swelled a few sizes. August's preschool had their Christmas concert and they have worked so hard on it. So hard, in fact that they asked if August could come to school five mornings a week instead of his regular two for the past two weeks so that he could learn all the songs. It was such a truly precious event. It hit my heart so hard that I had a moment of wishing that I had never lost my love of the baby Jesus story, the wonder of it all.
The whole thing only lasted fifteen minutes which was perfect. How many Christmas concerts have I been to where I've constantly scanned the program to see how close to the end we might be getting. I probably shouldn't admit that but WHO AMONG US HAS NOT DONE THIS?
And now you're going to tell me that no, you never did that and I will feel like such a shitty mother.
Oh well.
But this was seriously fun.
Of course Vergil and Jessie and Levon were there as well as Maggie and Lily and also, our Liz Sparks. She'd texted about a possible lunch and when I told her about the concert, she asked if she could come.
I love that woman!
So she was there, too.
All of the little girls were angels, all of the boys were shepherds. Well, there was a Mary with the requisite blue headscarf and I suppose a Joseph but I didn't see him.
After the songs there were cookies and snacks in the fellowship hall. August seemed to take the whole thing in stride. He said he'd had a good time and he waited patiently for his treats afterwards as the line was so long that I didn't even stand in it but, clutching Levon to my hip cut in and said, "Excuse me. This child needs a cookie."
Old ladies can get away with that shit.
And he did need a cookie. With sprinkles.

After we'd fellowshipped enough we all went to lunch except for Vergil who had to get back to work. We went to the place where May works so that we could see her. We ate pizza and Maggie gathered the actors for her pretending. 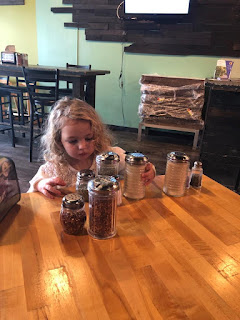 Today's family was quite large.

And after lunch, Liz and I went across the street to a real, true locally owned bookstore where I got three beautiful children's books for Christmas presents, one so sweet and tender and beautifully illustrated that I'll probably cry every time I read it to one of the children. 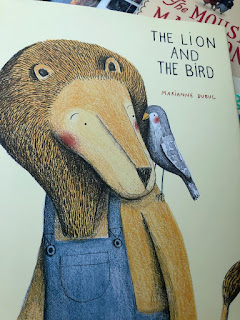 So it was a really good day and I loved being with some of my family and with Liz who is also our family. We call her "Ain't Liz" although she is one of the least contrary people I've ever met and in fact, one of the most likely to say "yes" to all things that life has to offer. I wish I were more like her and she reminds me with deeds, not words, that this is how life should be led.

On my way home I had a True Lloyd Experience. I was on the road that goes through my neighborhood, right past my house and got behind a Highway Patrol car. I could not figure out what in the world a FHP officer was doing on a back road in Jefferson County but at one point, he slowed down and then came to a stop, right in the middle of the road. I had no idea what was going on but I stopped too. When he finally started rolling forward again I could see what the hold-up had been. That giant white furry pot-bellied pig had crossed the road right in front of him and was now on the side of the road, completely unperturbed at having caused the delay.
The officer drove a few hundred feet and then took a left on a little side drive and as I drove past, I looked in my rear-view to see him turning around, probably to go and see if he could find the owner of this dangerous pig.
And I will say that if you hit that pig, it would be a mess. Airbags would deploy.
I myself had to slow down to a crawl and almost stop when a doe crossed the road in front of me. She hesitated before she got to the other side and looked back towards the woods where she'd come from but after a moment, she finished her crossing and I drove on, more wary than I had been before.

I do believe my husband is coming home either tomorrow or Sunday. He's been gone so much in the past month that I'm having difficulty remembering what it's like to be a wife.
I figure I'll remember when he gets home.

And here's a picture that Lily sent. 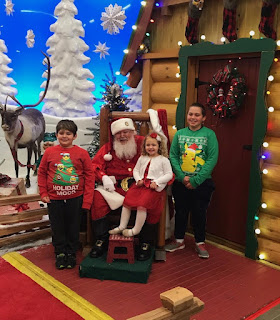 A Christmas miracle! They're all smiling. Look at my beautiful babies!

And now, just to prove that I have not melted into a striped puddle of peppermint candy-canes, I give you this. 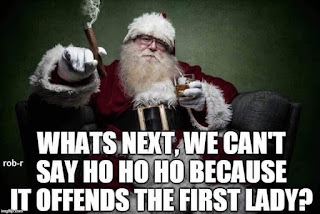