Well, There You Go 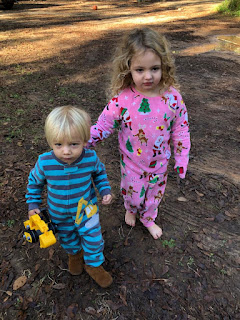 Levon had a very, very track hoe Christmas. He wore track hoe pajamas and Santa gave him a new track hoe. For most of today's celebrations, he was outside playing in the mud with his track hoe. Also, playing basketball which he plays by holding the ball and asking his dad or Boppy to lift him up high enough to stuff that ball in the net. The picture above is of Maggie escorting her youngest cousin into the house. I could hardly stand the sweetness.

Lily made us all breakfast although Lauren made the delicious grits. Eggs and bagels and sweet rolls and bacon and fried potatoes. And grits. The kids were all pretty patient with that process. 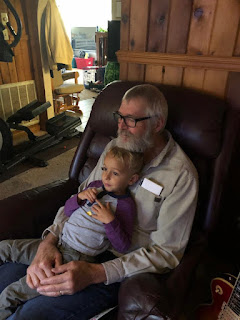 August and Boppy waiting for breakfast to be ready. A Christmas movie was involved.

August and Levon had already opened the presents at their house so they were primed for more. The Hartmann kids had been allowed to go through their stockings so they were too. And when I looked at what was under and around that Christmas tree I realized that if my presents had gotten here on time, there would not have been room for them. It was insane.

May took on the job of handing out presents. I huddled on a couch and tried not to completely lose my shit over the chaos and noise. I swear- it's just too much for me. I can't even begin to tell you what everyone got. I got some beautiful things from my kids including two silver necklaces, one with a conch shell and one with a Virgin of Guadalupe that I had actually looked at in a store last week because it was so pretty I almost bought it. Those were from May and Jessie. Lily gave me and Mr. Moon the most outrageous blanket/throw with pictures of the family on it. It is perfectly cheesy and wonderful! The pictures are actually great. I sort of want to hang it up somewhere. It truly deserves that.
I also know that Maggie got a bicycle. This Christmas had a "Frozen" theme for our Magnolia. The bike was a "Frozen" bike. Her helmet is a "Frozen" helmet. And she got on that bike and she rode circles around the driveway like she'd been born on it. She was fearless. Yes, it does have training wheels but still... 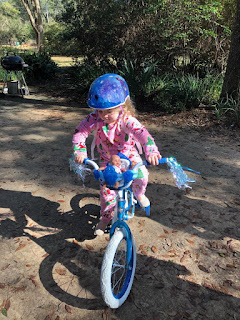 Because she's a good mother, she put her baby in the basket. There is a seatbelt so don't worry. 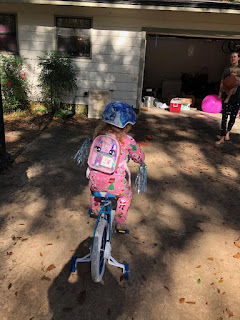 And, because she is a WOMAN baby, she put her cosmetic backpack bag on. One never knows when a girl will need to refresh her lip gloss. She just cracked me up. We all stood around and watched her go. She did fall a few times but got right back up and right back on. Do not underestimate the Power of Magnolia!
To continue with the theme of "Frozen" Maggie also got a light-up microphone that plays Belle singing a few of her songs (I really know nothing of this movie or the sequel, truthfully) and damn if Maggie didn't turn it on, start singing with Kristin Bell and when the song reached it's most dramatic and high-note moments, she raised her left arm in the air like a pro-damn-fessional singer.
Here she is, right before the dramatic moment. She's getting ready though, you can tell. 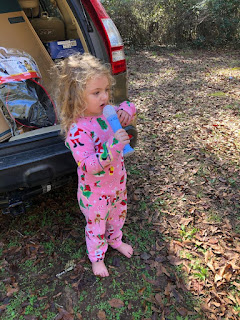 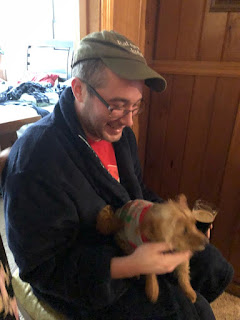 I just know that at some point Sammy is going to end up in that bike basket.
I hope Maggie puts his seatbelt on.

Gibson got a crazy, crazy helmet that has a bluetooth connection making it a sort of Star Wars-ish headset. Now, I have told you that Gibson is taking hip-hop dance classes, right? So he, too, gave us a performance. 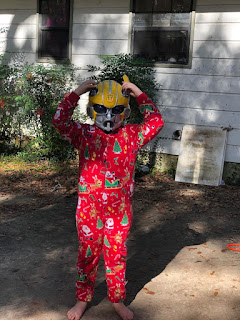 I swear, that kid is the most loving, innocent, darling child. He is also the world's loudest child but as a middle child, that is only to be expected.
And you know what? I didn't get one picture of Owen. I have no idea why. Mostly because I was so completely overwhelmed by it all. I meant to get family pictures of everyone but only managed to get this one of May and Michael and Michael's beautiful mama Chris. 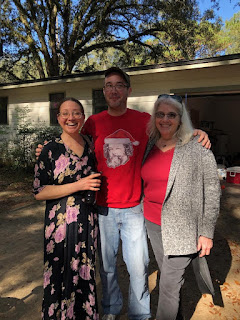 They were leaving to head over to Bio-Dad and Other Mother's house.

And that was about it. I think my favorite moment was when we were sitting around eating breakfast and Lily told the story about how when she was a little kid she was doing flips on her bed which broke a slat which caused the mattress to tilt way up and then she proceeded to pretend that she was asleep and had no idea that it happened, much less how it had happened.
As she recalls, I did not for one second buy that. I laughed so hard at her telling of this story that my stomach hurt.

The rest of the day has been very peaceful with Mr. Moon and me just hanging out at home.
We opened our gifts to each other here. He gave me a bunch of fun stuff like a can of my favorite fancy espresso and a new paring knife that's sharper than a serpent's tooth and also some Le Creuset which I love but also feel like I do not need. I don't know. Maybe I do.
I am not good at gift-receiving.
I gave him a new barn coat to replace his beloved old one that is literally falling apart. And a box of Godiva's.

Tomorrow Jessie and Vergil and the boys are going to drive up to Asheville for a week or so to spend some time with the mountain kin. I will miss them so.

And we missed Hank and Rachel a whole lot. They seem to be having a fine time up in Georgia with Rachel's mother and brother and that's good. They'll be back in a few days.

In four hours and forty-three minutes Christmas 2019 will be over.
Sigh.
I survived.
I hope you did too.

One more thing- I really don't have the words to adequately describe how much this tiny little place on the internet means to me. Sometimes, like today, someone leaves me a comment that absolutely guts me with emotion. And every day I get comments that mean more to me than you can know, that sustain me through times of feeling worthless and useless and alone.
I know I'm not alone.
I hope that you know you are not either.