Performances And Other Stuff 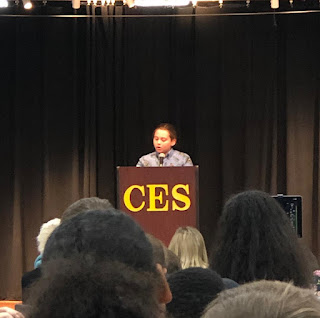 I got up bright and early this morning to be at Owen's school at nine to attend the Tropicana Speech contest that he was competing in. The kids who'd won first and second places in their classrooms (this was for 4th and 5th graders) were on the stage of the cafetorium and all of the 4th and 5th graders were brought in and they sat at the their lunch tables. That was a lot of kids!
Lily and Maggie joined me and we listened to all of the speeches and we were so proud when Owen got up and gave his. He rushed it and he didn't speak very loudly and he had obviously decided to disregard every bit of advice I'd given him about speechifying but it was quite the accomplishment for him to just get up there and do it. My handsome little man.
Lily and Maggie and I sat behind the students and I loved watching them as much as I enjoyed the speeches. Some of them put their heads down and dreamed with their eyes open, some paid attention for a little while and then let their attention wander. Some had to be reminded by the roaming teachers to be quiet or sit still or whatever it is that teachers have eternally told their students to do. Mostly, the kids were good and I loved watching the three little girls right in front of us. One of them had massive braids that I believe were a weave although I can't be sure of that. The other two little girls decided to braid the already-braided hair and the girl who was being hair-styled took off her glasses and gave in to the pleasure of it. They were quiet as polite little mice and no teachers asked them to stop.
For some reason, I loved this little scenario.
Maggie did very well with sitting as still and quietly as she could. I know she was bored but she handled it.
Snuggling with her mama was involved. 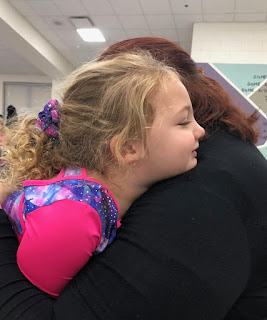 When the contest was over and we'd hugged a very relieved Owen, Lily took Maggie to dance and I took a pair of shoes to the shoe repair guy in hopes that he could do something about the falling-apart soles on them. These shoes are my go-to "real" shoes and I have not only had them for years but have owned at least four other pairs, exactly like them, before, buying a new pair when my current pairs have worn out.
I was devastated when I went to put them on a few weeks ago to find those crumbling, cracking soles. I love those shoes. They are ME, in a way. Comfortable and sensible and yet, I think they're pretty. A sort of Mary Jane clog and the company who made them has gone out of business.
Dammit, dammit, dammit.
So in the dim hope that they could be rescued, I took them in but the shoe guy just looked at them and shook his head.
"Those soles are biodegradable and they're just going to fall apart. I can't replace them."
It was a sad moment for me.
"Well, okay. Thank-you," I said, and took them back to my car and that was that for the shoes.

I went to Marshall's to look around for Christmas presents and what I ended up getting was a purse for me.
I no more need a new purse than I need an owner's manual for a frying pan.
But it charmed the heck out of me and I decided it was (once again) the perfect purse and I bought it and nothing else. Then I had to go to Publix and then I came home where I removed all of the stuffing from the new purse and transferred all of my stuff from my old purse to see how that felt and how it all fit and it was fine but I'm going to take it back. There's nothing wrong with it at all but honestly, I just don't have any business spending money on something so unneeded. And if it had pleased me tremendously I would keep it but I do still love my current purse and because of the quality of it, I won't actually need a new one for the rest of my life.
Theoretically.

So I finished watching a movie this afternoon that I started watching yesterday. The Florida Project.
Have you seen it?
Man. It's hard to watch. But don't let that dissuade you from seeing it yourself.
William Defoe is the only known actor in the film and I suppose the lead role is the one played by a little girl named Brooklynn Prince and she's one of those kids who puts grown-up actors to shame with her authenticity. I have to say that Defoe gave an amazing performance himself, very understated but with a thin wire of steel moving through him every second. The sort of performance that makes you wish you knew what his backstory was because there had to be one.
I say it was hard to watch for several reasons.
One is that it was filmed in Florida in a part of the state that I'm quite familiar with so that struck home hard. Another reason is that it's the story of a sort of poverty that although I've never experienced, is too close to the edge of a situation that any mother (or grandmother) could possibly find herself in and to look starkly and honestly at what sort of choices might have to be made in order to support a child or children or grandchildren is a nightmare as well as an indictment of our current social structure.
And then there's the always looming nearby presence of Disney World which promises magic to all but which, in fact, has created a decidedly non-magical environment for so many in its shadow.
All of the actors were spot-on. Their performances were as fine as anything I've seen lately.
I doubt I'll forget it soon. I even dreamed about it last night when I was still only halfway through watching it. The dream was so realistic that when I woke up it took me a few moments to try and remember whether the scene I'd dreamed was actually part of the movie or something I had imagined.

Well, two movie reviews (of a sort) in one week.

Mr. Moon is not leaving for Tennessee until Sunday morning which means that at least he will be going to the holiday office party. He keeps telling me that I don't have to go and I may not. Is not having the proper shoes a good enough excuse for not showing up?
Sure. Why not? 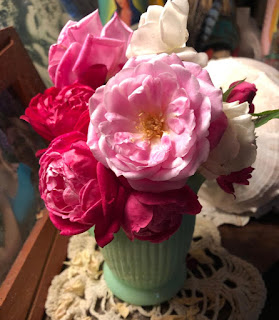 The camellias will be coming along soon.