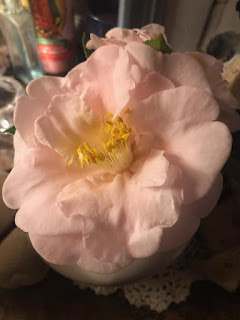 You know what? Today was just good. Okay, sure, when I first woke up it felt anything BUT good but that's normal for me. I'd been dreaming of working at a daycare center and not doing a good job of it and someone breaking something made of glass and a child stepping on it and then an adult showing me her foot which had a knife completely embedded in it and Lord God Almighty that was enough of that dream.
Am I worried about feet? Sharp objects? Sharp objects and feet?
Who knows? Not me.
But I managed to pull myself together and acclimate back to this world (not going to call it the real world because who knows?) and I took all of the trash and recycle to the place where we do that and everyone else in Lloyd obviously had the same idea because it was packed, people shoving cardboard into the cardboard recycle bin and so forth. Whenever I have to break down a cardboard box I always think about John Waters. He wrote a book about his experiences hitchhiking across the US called "Carsick" and how he felt so unmanly when he realized that he couldn't even break down a box to make a sign on indicating where he wanted to go. I, too, have problems breaking down a box and soon after I had read the book, we went to visit Jessie and Vergil where they were living in Asheville and they showed us the shelves that Vergil's mom had made for their kitchen which were beautiful and well-crafted.
"Jeez," I said. "I can't even break down a cardboard box."
And it's true although I did manage to flatten mine enough today to get them in the bin.
I felt so triumphant! Look at me! Being all box-flattening and shit!

Our friends Anna and Taylor are both in town for Christmas and Hank had set up a lunch at Midtown where May works for us to all get together to see them. I didn't realize how much I've missed them and how much I love them until they walked in the door and I started crying.
"How are you?" asked Anna, who is a very proper (in her way) doctor of history and I said, "Emotional as ever, as you can see."
Anna has moved back to South Dakota to teach at a university there, and Taylor and her husband have moved to Houston where they both have good jobs. And I'm glad for all of them but Tallahassee feels a little less than itself with those two gone.
I am SO proud of Taylor. She started working in restaurants awhile back and she has gone from doing the grunt work in various places and the only chef at a little cafe where she used to work with May to being the head prep chef in a brewery attached to some other venues (one of them huge) in Houston. She has learned to prep meals for five hundred people!
I asked her if she got good benefits. She said she has two new teeth, was about to get another one, had good medical insurance, was being paid for her vacation, and when she got back she would have her very own new prep room with a new walk-in and SHE IS IN CHARGE!
Whoa, Tay-Tay!
"There will be no yelling in my prep room," she told us.
And I bet there won't be.

Lunch was good and it was great to see May and give her her other Christmas present which I had mistakenly given to Hank. Lily and Lauren and Magnolia were there. Magnolia was in a sprightly mood and at one point wanted to go outside so we could take her picture. 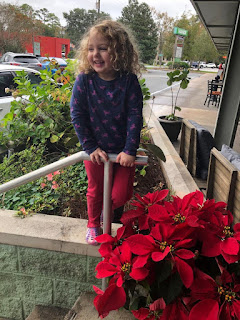 She is such a pretty child. I tried to get her to pose beside or in front of the glorious poinsettias but no, she had to be standing on that little wall.
She is the boss of me.
Hell, she's the boss of everyone.
She asked me to take her to the restroom, which I did of course, and when I asked her if she needed to go she hemmed and hawed and said that no, she just had some germs she needed to wash off her hands.
So we pushed our sleeves up and washed the germs off our hands.

I came home and cleaned the hen house and tidied up a few things and did some laundry and then sat on the couch and embroidered French knots on a pair of green corduroy kid overalls and watched "Schitt's Creek" which is not the best thing I've ever watched on TV but it's certainly not the worst. The acting is fantastic. How could it not be with Eugene Levy and Catherine O'Hara?

And then Mr. Moon got home from a basketball game and one thing led to another.
As things sometimes do.
If you're lucky.
Which I am.

Now he's getting his smoker ready to make venison jerky in. It's drizzling rain and supposed to rain all day tomorrow and Monday and then get cooler again which will be nice because it's been a lot warmer the last few days. As we speak I am wearing a short-sleeved shirt and am barefoot. In fact I hear a frog tweeting out his bird-like song. Our frogs don't croak, they sing.

Another picture of camellias. 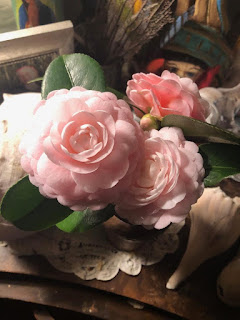 The world can't be all bad if there are flowers growing that look like that in it. I'm holding on to that thought tonight. I'll try to remember it tomorrow when I wake up with whatever horror show I've dreamed about on my mind, leading me to despair and deep, existential angst.

We shall see how that works out.