Hanging Out With My Littlest 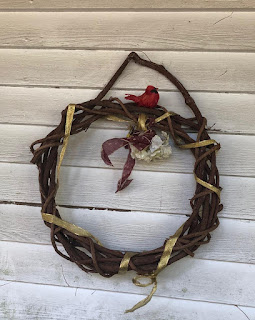 Well, there you go. Ho-ho-ho. That's my Christmas decoration. I made that wreath before Jesus was circumcised. I do like the cardinal although it's obviously going through a molting season.
I'd bring in the Norfolk Island Pine and decorate that but it and the pot it's in weigh upwards of fifty pounds and I'm not up for that. My husband, being out of town, can't help me and there you go. He called today to ask my permission to make an unexpected trip to Arkansas to duck hunt which means he'll be gone longer than expected.
I just laughed.
"Sure, baby. Go. Have fun."
He didn't really call to ask my permission. Mostly just to see if I minded. I often wonder what he'd say when these things come up if I put on my headmistress voice (I have one, trust me) and said, "No, dear. I don't think so."
He would fall over.
And it's a moot point. As long as he is able, it's fine with me.

Levon was here when he called and he talked to his Boppy. He and I had a fine time together today. He's acquiring so many words lately. The thing he kept saying today was, "That's so RUDE!"
He also likes to say, "That's so funny!" which he said a lot while we were watching "Mighty Little Bheem." I love that series. The artwork is beautiful. It's set in India and Bheem is a preternaturally strong baby who is the joy and the torment of his mother.
And Levon is right- a lot of it is so funny.

Besides watching a little of that, we read books but he's mostly interested in the ones with trucks and tractors, etc. He had snacks and dipped graham crackers in milk which made a huge mess but I did not care. We sat out on the front porch for awhile and rocked in the chairs. He kept making me switch chairs with him because whichever one he was in was "too hard" to rock although he certainly seemed to manage fine. 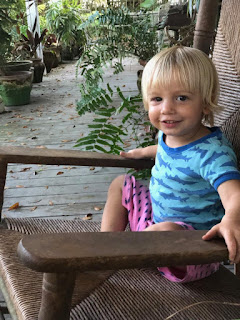 Such a beautiful little boy. 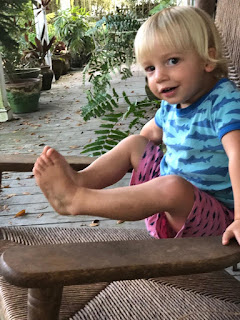 Here he is showing me how he can raise himself up on his arms so that his butt is above the chair seat. I'll be honest- I was impressed.
I was also impressed that he noticed and commented on the fact that I was wearing a dress he'd never seen before when he got here. It got up to almost 80 here today and so I switched out my overalls for a very old hot pink linen dress. "What's this?" he asked, pointing to it.
"That's my dress," I told him. "Look! It's the same color as your shorts!"
He pointed to my dress again and then his pants. "Green, green!" he said.
"Um, well, close!" I said.
But I tell you what- the kid can count to thirteen. At least.
He's a precious little guy and I probably told him two dozen times, at least, that I loved him today. I was a bad Mer, though, in that I did not get him down for a nap. I don't think I realized the importance of that and I could tell that Jessie wasn't thrilled that his schedule was so screwed up. But hey! I asked him if he wanted to take a nap. He said no.
Who was I to question that?
Oh yeah. The adult.
I'll try to do better next time.

When Jessie and August got here to retrieve the boy, I asked August about the movie. He'd loved it. I asked him how big the screen was and he said, with many exuberant hand gestures, that it was bigger than my whole house! I asked him if there was much kissing and he said no, but there was a lot of hugging.

So that's been my day.
I'm going to make some spinach pasta tonight. With baby peas. The longer my husband is gone, the more baby peas I get to eat.
Here's what my baby garden greens salad looked like last night. 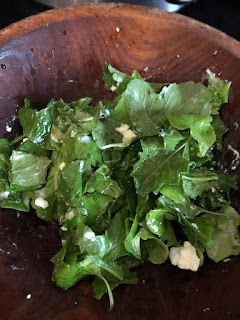 The perfect salad. There are probably ten different types of greens in there along with vinegar, olive oil, salt and a little feta cheese. I could eat that every night of the week but at this stage of the garden, I have to pluck and pick very sparingly. Each and every tiny leaf is precious to me.

The hens are back on the nest for sure. I got three eggs today. Before I know it, the problem of having too many eggs will be a reality again. What a lovely problem to have! 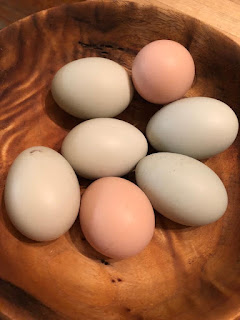 Another thing I love about Baby Bheem is that their chickens lay green and blue eggs. Just like some of mine. Levon and I took a walk around the yard and when we got back in the house, Liberace and one of the hens were in the kitchen. I have to tell you that a full-grown rooster is almost as tall as a toddler. Levon sort of hung by the door while it took me a second to register that the birds were in the house.
"Scat, y'all!" I said. "Get on out of here!"
And I chased them out while Levon watched with great interest. We talked about that all afternoon and when we were watching Bheem, there was an episode where all of the animals came into their house. The cows and the pig and the goats and the chickens. We both laughed because we could relate.

Have you seen the moon tonight? 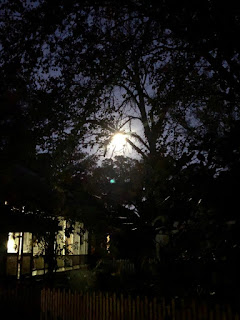 Life in Lloyd. Not so very different than life anywhere. Or least anywhere that chickens lay green eggs and sometimes wander into the house.