This Is What Happens When You Spend Too Much Time Alone 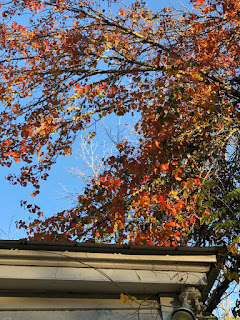 The little golden hen I've been calling Sissy tried again to roost on a potted plant on the kitchen porch tonight. 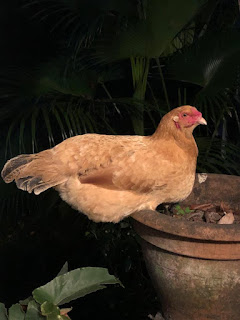 I saw her on my way out to shut the other chickens up for the night and I thought I'd try again to catch and carry her to the roost with the rest of the flock. I did manage to grab her but she cackled and bawked hysterically, flapping her wings with all her might. Liberace heard her from the hen house and called out to her and when she escaped my grip right by the clothesline she ran towards the roost as fast as she could and although she hesitated at the door, she did walk in and I, right behind her, shut her in with the others.
I really would like for her to start sleeping in there without needing my interference. I think she's still afraid of the now-gone roosters who probably tormented her at bed time. Perhaps she will realize that she's safe from their attentions now. I hope so.

Mr. Moon is on the road home with an ETA of 11:00 tonight or so. I hate thinking of him on the road so late and I know he got up early this morning for one last sit in the deer stand. But by the time he'd gotten the truck all packed up and then stopped to get some Tennessee barbecue to bring home it was far later than I'd like him to be starting out. But he's a grown man, a full grown man, and although I can plead with him to be safe and to please stop if he gets sleepy, he's going to do what he wants to do although he did respond to my text with a "I sure will, baby."

I mopped the kitchen and adjoining bathroom today which requires that I take everything in those rooms not nailed to the floor or too heavy to move out into the hallway which is the hardest part of the whole operation. That and putting them all back. And for a few hours it smelled deliciously of Fabuloso and vinegar but now even that has faded. I had thought last night that Mr. Moon might be home by supper time tonight so I started a loaf of bread rising and it's about to go into the oven with no one to eat it while it's warm but me.
Feels like a waste.
I was going to make soup too but discarded that plan when I found out that he wasn't getting home until late. Maybe I'll make it tomorrow.
And I will eat leftovers tonight.
Which is perfectly fine.

I've been sewing on Maggie's nightgown but it's felt like I've been working underwater or something. It took me hours to deal with the buttonholer attachment and make three simple buttonholes. I could not for the life of me manage to get a good marking on the fabric with the tracing wheel and marking paper which didn't help. And although I finally got the job done, the placement is wonky to my eye and it would probably be wonky to yours.
Well, that's the joy of sewing for a child- they hopefully do not notice such things nor would they care if they did. The rate this project is going I figure I'll have it finished in time to be part of her trousseau. 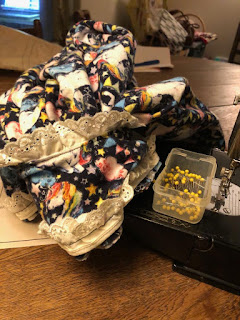 "Darling," Maggie's beloved will say on their honeymoon when she comes out of the bathroom, wearing a shy smile and her unicorn nightgown, "Why are you wearing a child-sized flannel nightgown with unicorns and rainbows and white eyelet on it?"
"It's complicated," she'll say. "Do you love it?"
"Well, I love YOU," he or she will say. And I will look down from heaven and snort beer from my nose with laughter.

Of course this is all ridiculous. I'll never get into heaven. As we all know.

All right. I'll be back tomorrow to tell you what it's like to have a man around the house again.

I wish you all peace and sweet dreams in your personal human equivalent of a hay-filled hen house where you can choose to cuddle with others of your kind or with a dear friend of another species or absolutely alone, whichever makes you happiest.