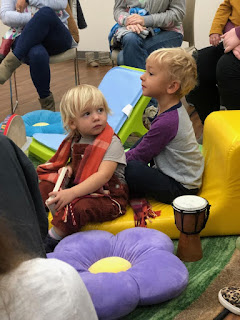 For some, self-care (and I hate that term for some reason) translates to a long, steamy bath or perhaps getting a pedicure. For me, self-care gets no better than going to the story and crafts hour in Monticello at the library with grandchildren. There is very little in this world that could make me happier than being in a room in a library where kind librarians read books to beautiful babies and then helping glue pom-poms onto paper. It's sort of my idea of heaven. 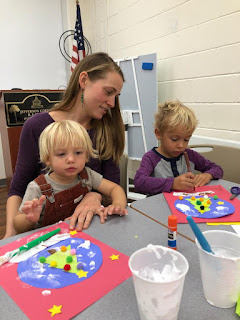 When Jessie and the boys picked me up today I told August that I was so excited to go to the library to see Mr. Terez and Ms. Courtney with him. He said, "I'm so excited to go see them with you!"
We were a little late and missed a few pages of the first book but I think we got the drift. There were children a bit older than August and some younger than Levon. There were mamas and grandmamas. And there were Terez and Ms. Courtney. 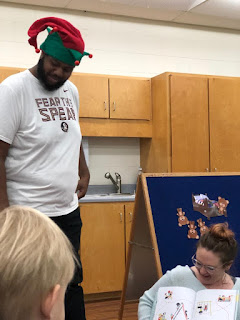 After crafts, the boys played with drums and it was all so noisy and cheerful. 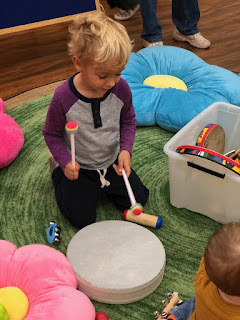 And then there were books and a computer game for August. Levon kept finding books about trucks and other heavy machinery, wanting me to read them to him. He got so attached to one that he wouldn't let it go. Luckily we could check it out because he wanted to take it home! I also found the newest Elizabeth Strout book, Olive Again, and I brought that one home to my house.
Terez was kind enough to bring the new little mice out of the habitat that they've just put in and we thought the boys would love them but Levon was a little afraid of them and August was so involved in a computer game showing him how to tie his shoes that only Jessie and I held the little critters. They were curious and soft and I realized my abundant hypocrisy because when I see a mouse in my house I am FAR from amused and yet here I was, oohing and ahhing over a tiny rodent with eyes like black seed beads, crawling around on my own personal body.
Humans are weird.
But golly, mice are so cute when they clean their noses with their tiny clever paws.

After the library we went to lunch at a new seafood place that got a very good write-up but we were not impressed. There were french fries and there was ketchup so the boys were happy and we had fun anyway.

And I have felt cheerful all day long, even when I had to move my porch plants to the back of the porch and cover them all up as best I could because it's going to freeze tonight.

Besides being happy about going to Monticello I've also been celebrating (mostly by myself) the fact that it is Keith Richard's 76th birthday today. Every December 18th that the man is still alive is a good day for me. And not only is it his birthday, it's his 36th wedding anniversary to the beautiful Patti Hansen. 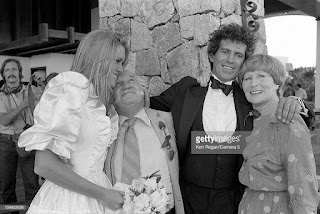 Their wedding day in Cabo San Lucas. I assume that Keith has his arm around Patti's mother and for sure, Patti is hugging his dad, Bert, whom Keith became very close to in his older years, best mates, beloved companions. His dad traveled the world with Keith and the Stones and yes, when he died, Keith did snort a line of his ashes with a little coke.

And here's what Keith posted (or had posted) on his FB page today.
I think that maybe the marriage will make it. 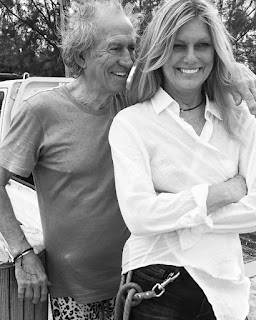 I'm sure I've posted this before, but here's the poem that the amazing and inestimable Tom Waits wrote for Keith.

I'm sure that a lot of people really do not understand my love of Keith. Ten years ago I wouldn't have understood what that was all about either. But then I read his amazing memoir, Life, and I fell in love with him. I had believed all the myths and hadn't known much of the truth, most of which was far more interesting and sometimes more outrageous than the stories that had sprung up out of nowhere and become legend.
He is a legend. Authentically and deservedly so. His place in the history of music is firmly set, the way he plays has been copied but never bettered. He created the image of what a rock and roll guitar player should be. He is honest and he is funny and he has a heart the size of Texas. He was a junky, he is now clean and has been a million years. He loves his family and he loves his friends and it appears that once he falls in love with a person, he loves them for life.
But I think what he loves the most is music.
He is the guitar player for the best rock band in the history of the world. Don't even try to convince me that I'm wrong.
By all accounts he should be dead. But he's not. And he's still the guitar player of the very best rock band in the history of the world.


That face. How I love that face.

Well, that's the news from Lloyd today. I may not have the best blog on the internet but I bet you almost anything that it's the only one today to talk about grandkids, story time at the library, mice, and Keith Richards.

It's all about self-care, babies.