The Etiquette Of Eating Your Young, Plus Other Things 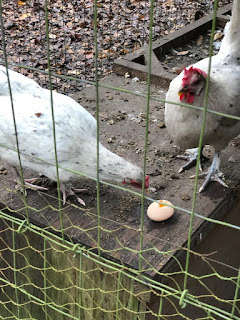 When I went to let the chickens out this morning I came upon this sight. Dottie and Darla were taking very polite turns daintily dipping their beaks into an egg with a hole broken into it. The funny thing is that I've been getting an egg like that one every day with a few cracks in it. Sometimes eggs do get cracked in the laying process but they're generally weaker-shelled eggs whereas these eggs have seemed rather sturdy.
Have Dottie and Darla turned into...CANNIBALS?
I think it's a possibility.
And damn.
Chickens do like eggs but I've never seen quite this behavior. And it's odd.
Lay an egg, eat an egg? And so forth?
Perhaps they have some sort of nutritional deficit but they're eating the same things they've always eaten. I give them laying pellets and corn scratch and food scraps and they spend their days scratching in the dirt in search of tasty bugs.
I will be observing them to see if I can figure out what's going on. I definitely hope that it's not a matter of these two hens developing a fondness for their unborn.

So I went to the mall today. I haven't been to the mall in probably a year. But I have to have a new pair of shoes to replace the ones that the soles spontaneously rotted on because I have very few shoes that socks can be worn with and it's about to get chilly again. I knew that Dillards carries Danskos and so I checked to see if they had the ones I want but they did not. I walked around a little bit, just in the shoe department and thought about the days when I shopped. I wanted to call Lis and tell her that I missed us being those shopping girls, looking for treasures whether of the shoe kind, or jewelry, or clothes. We were so good at hunting out bargains and sales and we had such good times.
Now we're too busy, I guess, and neither one of us seems to have a need to acquire new things. It's a little sad.

When I got home from town I went online to try and find the shoes I wanted and I did and everywhere I looked they all cost the same.
Check this out. 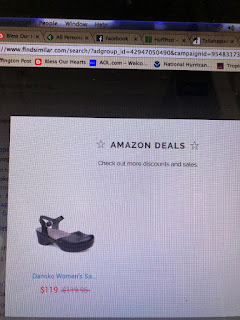 Whoa! A markdown of ninety-five cents on a pair of shoes that cost over a hundred dollars!
Take my money!
No. I did not order from that site. I went to the Dansko site and ordered there. They cost a dollar more but shipping was free. I hate spending that sort of money on shoes but if they are as comfortable as my old ones I will be wearing them frequently for the next ten years so I guess that's okay.

I had planned to cook our black-eyed peas with the ham bone from Christmas and some collard greens tomorrow but I just realized that is the the New Year's Day meal, not the New Year's Eve meal so I'll have to plan something else for tomorrow.
Sigh.
I swear- deciding what to cook for supper is just about the hardest thing I do all day.
Get out the tiny violins, right?

I'm going to an FSU basketball game tomorrow because Owen's basketball team is going to be doing something at halftime. Like...walking out on the court?
I have no idea but it won't kill me to go to a basketball game. I like the way the shoes of the players sound when they squeak on the floor. Also, Mr. Moon has informed me that they serve some awesome nachos at the venue. I used to like basketball more when the shorts the players wore were actually shorts and showed off those long, fine legs.
Oh well. I can look at my husband's legs whenever I want to look at a nice long leg. He's got two of them.

And speaking of the guy- this picture came up on my FB memories today. 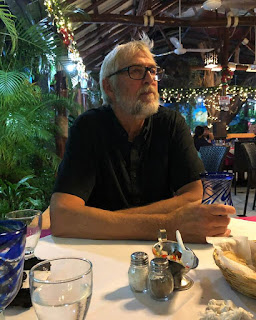 That was him on New Year's Eve last year. Am I a lucky woman or what?

I better go make his supper.