Warning Or Invitation? Nudity Ahead And Vulnerability Too 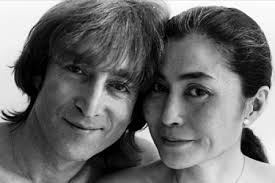 December 8th is a tricky day for me. It's a double-anniversary in way.
It's the day that thirty-nine years ago John Lennon was murdered.
It's also the day that forty-four years ago I married my first husband.
Both of these days are deeply embedded in my memory and they are entwined together.

I woke up this morning alone. Mr. Moon had gotten up at five a.m. to start his journey to Tennessee. I felt adrift and weepy. I stayed in bed as long as I could because I just couldn't face the day and it soon came to me that it was December 8th, that deeply emotional day.
I got up and nothing cheered me.
I think that the body does remember anniversaries, both the good and the bad. Maybe especially the bad. The ones I call "death days."
My first wedding anniversary is not a death day, not at all. The man I married that day gave me my first babies. We had some lovely and loving times, some fun times. We tried. And he was never physically abusive or less than loving towards the children. He was, and is, a decent man in many respects and we still love each other in some ways and are amazed at how things have turned out so beautifully. We talked about that, briefly, when I went to hear him play Thanksgiving Eve and he even said a few words to me that I have always hoped to hear but never thought I would.
Words that mean a lot, even after all of these years.
But there is still and always will be sorrow for the breaking up of a family. And the day I truly knew that we would be breaking up was on our fifth anniversary. "Double Fantasy', John and Yoko's last album together was released a few weeks before that day and I had been listening to it obsessively. It was the ultimate love letter from one partner to another in a long-lived marriage that had been through hell and back and there was such brutal honesty in it as well as so much tenderness.
It was the story of a marriage that had been through fire and which had survived and which was being celebrated with all of the genius of two remarkable artists.
And I knew that my marriage was never going to reach that place. It simply wasn't going to happen.
Not only that, we both were hoarding our own piles of resentments and disappointments which were way too sharp and painful to hold. We were so young.
We went out to supper for anniversary and on the way home we argued. I remember that so well.
And when I got up the next morning and went to take my run and then stopped at the newspaper box to get our copy and saw that tiny article bordered in black with the headline, "John Lennon Shot And Killed," something in me just died right along with him.
And not long after that we split apart, my ex and I and I made many huge mistakes and I did a few things right and I mourned for Lennon and I mourned for my family and I mourned and I grieved and I upended everything that I'd known.

I will never, ever recover from John Lennon's death. Those of you who did not grow up in the sixties and seventies can have absolutely no idea how my generation felt about the Beatles. And John was...well, I can't even describe what he was to us. He wasn't a god. But he, along with his band mates, had absolutely, as Yoko said, "changed the world."
Does this sound ridiculous?
Well. It wasn't. It was profound and it was true and I guarantee you that this world is indeed a different place for them having been here and for John and Yoko's passion to work for peace no matter how they were ridiculed or criticized.
And suddenly, John was dead.
Want to hear something funny? (Not funny.) When John was murdered, I had just finished reading some trash biography of Keith Richards which was full of lies and gossip and one of my first thoughts on hearing of John's death was, "Why wasn't it Keith Richards who got shot? He's been trying to kill himself for years!"
Well. There's a bit of irony.

So December 8th is filled with all of these emotions for me. Sadness and grief and yet at the same time, gratefulness that we DID have John Lennon. And that I did marry a man who not only fathered two of my favorite, most beloved people on earth but who has been a loving father to them. Those are two completely different things and I am well aware of that.
And as always, I have to say that Yoko Ono is in my thoughts today and my heart as well. My god, what a woman! What an artist and survivor and a true believer in peace. And in love. A woman whom the world vilified simply because she was not a blond model but a Japanese artist whose voice was as shrill and loud as it needed to be and John fell in love with her and jumped from the safe path of being a Beatle to being brave enough to bare his naked soul as well as his naked body. 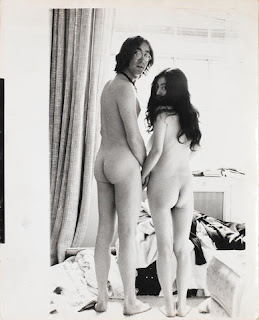 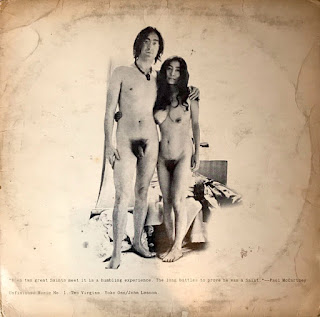 And thus, he freed himself from being Beatle John and allowed himself to be exactly who he was.
On the last day of his life, Annie Leibovitz took this picture. 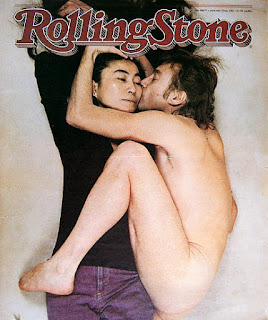 Still naked. Still in love. And as vulnerable as a man can be.

At the very beginning of it, and you have to listen closely, he says, "You hold up the other half of the sky."

There was no one like him nor will there ever be.

Love you, John. Love you, Yoko.