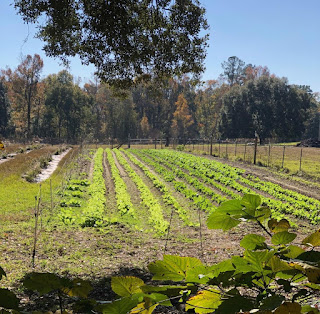 Now that is what I call a beautiful garden. I took the picture on my walk this morning, again on White House Road. I wonder if someone plants it just for his or her own family or if the greens are sold. I have no idea. The paler greens to the left are lettuces but I can't make out what the greens on the right are. Sometimes when I think about how we humans do, in fact, get our sustenance from the sun via the photosynthesis of plants, my mind almost explodes with the wonder of it.
We are made of stardust, we live on sunlight. Okay, a few degrees of separation occur in all of that but it's still basically true.
Isn't that just something?

I took this picture today too. 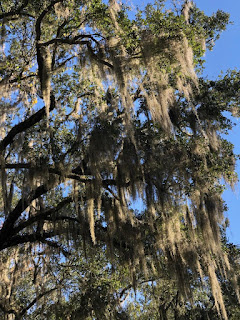 Spanish Moss, hanging from an oak tree. You know, I've lived around Spanish Moss my entire life and until just a few moments ago when I googled it, I did not know that it is a form of a bromeliad. There's a very fine article HERE if you have any desire to learn more about it.
The older I get, the more I realize I do not know. It's a bit depressing and at the same time, thrilling.

So I met Lily and Jason and Magnolia and Jessie and August and Levon for lunch today. We went back to Tan's because Jason hadn't eaten there in a long time and had a hankering. I'll go to Tan's any time. Jessie didn't eat anything there because of her very strict study-diet but she sipped some tea and the rest of us enjoyed vegetable curries and noodles and rice and tofu and other less pure forms of protein. It was, as always, delicious. The woman who may or may not own the place but who is always there and who takes our money has the most delightful speaking voice. She teases me about sometimes paying for my children's and grandchildren's lunches and sometimes not. "What? Grandmother isn't paying for everyone today?"
She's always cheerful and always friendly. "You come back soon!" she says, knowing that of course we will.

After lunch, the kids played by the fountains outside the nursery next door and as always, were fascinated by the green glass stones in the gas fire place. They couldn't be more thrilled with them if they were the emeralds of the Aztec kings. 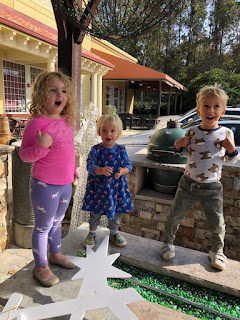 Jessie says that Levon has become very particular and picky about what he wants to wear. Today he chose August's old fox dress that I made. That child is so beautiful these days that my heart can hardly stand it. I tear up every time I study his face. I know this sounds absurd but I truly do want to live long enough that this little boy, possibly my last grandchild, will remember me. I think if I died tomorrow, the older four would probably have at least a vague memory of me but Levon probably wouldn't. And I so want him to. And I want to see more of who he is becoming. He is still very shy and very much prone to wanting to sit on his mother's lap although if she's not around, he's far more apt to engage with me. He and his mama and August and I went into the nursery and he found one of the kid shopping carts and pushed it around like a pro, just as he did last year when he had barely begun to walk. Generally a small child pushing one of those things is just a disaster. They run into everything. But Levon seems to have a preternatural ability to steer. He pushed that little cart around for half an hour and only bumped in to one thing which is better than I did with my own cart at Publix today.
Jessie wanted some flowers and so she and the boys picked out pansies to plant. 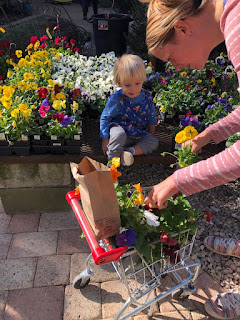 He felt quite important, pushing Mama's plants around. I was so proud of him.
And guess what?
I bought my beet seeds.
Now to get them in the ground.

I am quite pleased with the way my bread came out tonight. Here's what it looked like when I plopped the risen dough into the hot dutch oven. 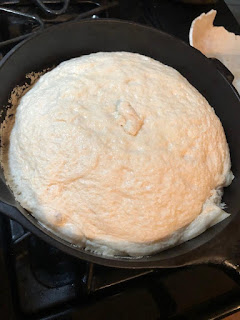 I've just taken it out and it looks like this. 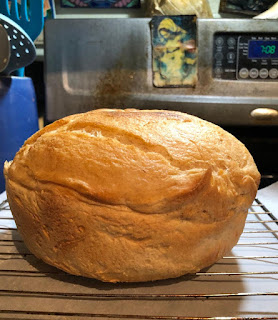 All praise the power of the Yeast of Lloyd!

That's all I have to say tonight except that it's really damn cold. Florida cold. We'll probably survive.