Rituals Have Been Observed 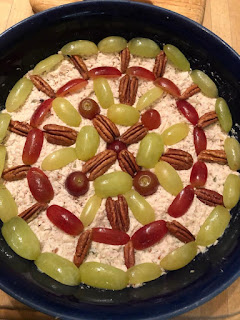 Strange Christmas Eve here. I had what I think was a weird and unfamiliar type of anxiety attack late this morning and decided to just take an Ativan and see what happened which is that my symptoms abated but never entirely left me. After I got the chicken salad (see above) made and the bread baked, and the ham in the oven I took a nap and then got up and took a shower and got dressed to go over to Lily's. It turned out to be a rather small gathering. Jessie and her family are not feeling well and Michael has been running a fever so it was just us and Lily's family and Jason's brother and the Darling Lenore and Jason's mother and Lily's best friend from forever and her husband and son, the one and only Wiley Cash. And Lauren, the Hartmann's roommate and our friend.

There was way too much food but it was a fairly peaceful and sweet evening. The children played and watched a Christmas movie and the adults ate and drank rum punch and I dissociated and stayed close to my husband and ate too much ham and smoked salmon and talked to my Owen. 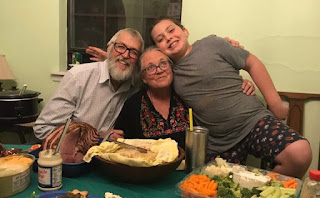 Forget gold, frankincense and myrrh. We have ham, sourdough bread and Miracle Whip.

The presents I ordered for all of my grandchildren have not arrived and so I'm going to look like the Big Christmas Loser tomorrow which I suppose I am. I also discovered that I gave one of May's presents to Hank and Rachel instead of one that did belong to them and no, I didn't mislabel them. I just screwed up.

That pretty much sums it all up.

Although these pictures may sum it all up even better.
When Mr. Moon and I bought this house, there was a plaster nativity scene ON THE REFRIGERATOR and it charmed the dickens out of me because I was in some sort of religious iconography phase as long the images portrayed the madonna. There are many reasons for me being in this phase. One of them was that my friend Sue who died in 1995 had loved the Madonna and had pictures of her all over her house and another was because the holy mother is so beloved in Mexico. And let's not forget the goddess aspect of Mary.
So. The plaster nativity. It looks like this. 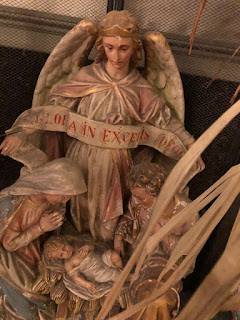 It's pretty impressive in a large sort of way. It covers the fireplace in the dining room which is where I keep it these days.
But the expression on the holy infant's face just kills me. 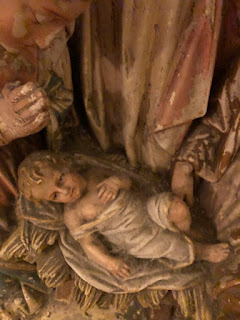 And let's be honest- that's the holy toddler. That kid could sit straight up, throw his legs over the edge of the manger, hop down and walk out of the barn if he took a mind to and it looks to me as if he may be contemplating doing just that.
"Oh my god," he appears to be thinking. "Really? Really? This is what life on earth is like? And who thought this was a good idea? Oh yeah. God. My father. Sure. Thanks, Dad! This is not going to turn out well."

Poor baby. And he was right. It just didn't.
No wonder his first miracle was turning water into wine. The poor kid needed a damn drink.

I better go to bed. We have to be back over at Lily's tomorrow to eat breakfast and watch the grand unwrappings. I hope my grandkids don't hate me for waiting so long to order their presents. Oh well, they'll love me to pieces when they get lagniappe Christmas.
Hopefully.

Here's wishing all good things and peace and love to everyone.
May your anxiety attacks be short, may your sleep be deep, may your home decor be as holy as mine.