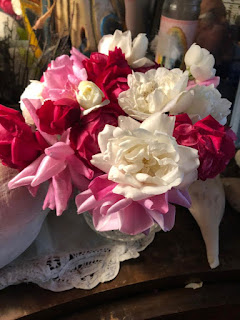 I just realized that I have not spoken to one human today. Not with my voice, anyway. I didn't even go to the post office where at least I I exchange greetings with our postmistress. But it's fine. The world would probably be better off if some of us shut up for a day or so now and then.
It certainly did not subtract from my enjoyment to be silent. I had a lovely day. It was cooler this morning and I did some work outside, cutting spent lilies and cleaning the hen house, watering porch plants and cutting flowers to bring inside.
There are SO many roses in that vase. It's a messy bouquet. I admit that. But these are all heirloom roses and their petals are soft and some of them, when they're open, already look blown even though their petals are still stuck firmly on. In a few days there will be rose petals all over that little vanity and on the floor of the hallway where it sits, too. Who could mind that? The roses scent the air and I feel as if I have an abundance of rich sweetness in that vase.

Besides the roses, I also cut camellias which, it came to my attention, are starting to bloom.
Here are some of the Camellia Sasanguas which bloom first. 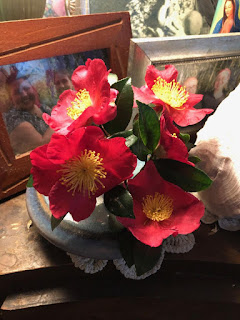 I love them. They hardly look real and remind me of the crepe paper poppies people wear on Memorial Day. The bright golden yellow stamens bring to mind sea creatures as much as they do of anything terrestrial. 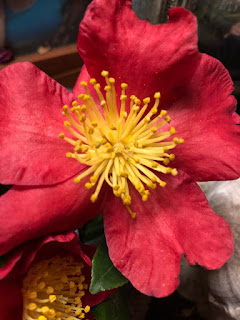 Anemones, in fact, is what they look like to me. And having just looked up sea anemones, I have now learned that they themselves were named after the flower anemone.
Well, there you go.
And here you are. 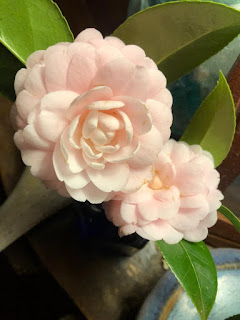 The Pink Perfections have started blooming.
And you know how much those perfection confections make me happy.
They remind me of a newborn's cheek, a little girl's dream of love, the clouds of sunset or sunrise, barely tinted by the sun in transition.

Although it was lovely this morning, it's been drizzling a bit since this afternoon and it's getting cooler again. It's not going to be cold but it's cool enough for cashmere and I like it like that.

Besides all of that outside stuff, I've also tightened up some buttonholes on a dress, cut out Maggie's nightgown, and taken my new iron out of the box and used it.
I swear to you- finding pleasure in a new iron is not something I'd ever thought I'd do but there you go. It's so steamy! A steamy, dreamy iron. While I was doing the buttonhole thing and the ironing, I watched a movie called I'll See You In My Dreams.
A New York Times reviewer, Stephen Holden, called it, "A modest, quietly touching portrait of an older woman radiantly embodied by Blythe Danner."
And I agree.
At first I thought it was just going to be one of those old lady movies and it was but it was more than that. There were some fine actors in it. Blythe Danner plays the lead role and a lovely triad of other older woman play the supporting friends. June Squibb, Rhea Perlman, and Mary Kay Place. And in the heartthrob role we find Sam Elliott.
Sam Elliott.
What can you say about that man?
How about this?
Somehow at the age of seventy-four, he makes most all other men look like male embryos.
And I have to say that Blythe Danner is incredibly beautiful. And both of them are seasoned actors who know how to convey the deepest emotions with the smallest of gestures and expressions. No histrionics required.
There's a kissing scene that made my toes curl.
Compare this to the highly publicized new movie on Netflix, The Marriage, with Adam Driver and Scarlett Johansson which I have also watched this week and which I found completely unsatisfying. It was as if scenes from many different movies about divorce had been cut and pieced together and I couldn't manage to muster up a bit of empathy for any of the characters and to tell you the truth, Adam Driver always makes me think of a big whiny baby. When I first saw one of his movies I was intrigued by his unconventional features which is what I generally find attractive but, eh, I don't know.
Big whiny baby.
And Johansson's performance was so understated that I could practically feel the restrictive pain of her emotional Spanx.

Well, who am I to cast judgement?
No one.
But I'm allowed to have my opinions and those are mine.

I also ordered some Christmas presents for my grandchildren today. I fear that most of them won't be here until after Christmas but la-di-dah.

I haven't paid much attention to the news today but I just checked and it would appear that Orange Imposter is still alive.
We persevere.