Well, once again it is one of my favorite holidays.
Keith Richard's birthday.
Last year's post said it all as well as I could say it today so here's the link if you want to see it.

Ah but it's a gloomy Sunday here. Next Sunday morning perhaps I will be seeing something very different. Something like this. 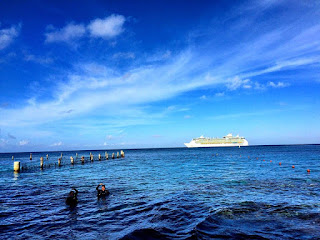 I am so ready. Well, not really. Last night I started making a list of all the things I need to do before we leave on Thursday and it's about as long as my arm. Okay. That's a lie. But it's as long as Maggie's arm. At least. And I'm fretting and worrying and realizing that our flight to Atlanta on Thursday leaves at something like 6:30 a.m. which means we'll be getting up at like 3:00 a.m. and then we have to sit in the Atlanta airport for about four hours which sounds dreadful but we'll end up getting into Cozumel before 2:00 p.m. which sounds wonderful but this year Mr. Moon has incorporated a car rental situation into the air flight agreement and I have a strong feeling that it'll be at least 4:00 p.m. before we get to the hotel because
(a) I've never even HEARD of this car rental company,
(b) The reviews of it are awful,
(c) It generally takes us half a day to rent a moped and so the negotiations are going to be endless and although Mr. Moon has read all of the fine print and will have all the necessary documents and blah, blah, blah, it's going to be a huge pain in the ass.
(d) Trust me.

Ah well. This is how it goes. The conundrum of Cozumel is that some parts of it are so easy that it makes you wonder why on earth life has to be so difficult and some parts are just so...well, complicated...that you sort of want to lay down on the ground and cry.
But I understand it. I mean, take a car rental agency. They don't make squat on what Travelocity or Expedia or whoever gives them in cut-rate rental agreements and so they have to add on whatever they can and although I understand that, this is NOT our first rodeo or rental situation in Cozumel and no, we don't need all that extra shit although we do need a car with let's say- tires- and so on and so forth and you have to get through the frustrations and difficulties before you can get to the lounge chair beside the water and that's just all there is to it.

Wah-wah-wah and if these aren't First World Attitude problems, I don't know what are.

Oh, to be Keith Richards and have people who arrange all of these things although actually, if I were Keith Richards I wouldn't be able to just walk into the grocery store and buy rum and limes and crackers and yogurt drinks and saint candles and dishtowels, would I?
Which for me is one of the best parts about being in Cozumel and I will probably weep a few little tears of happy joy when we walk into Chadraui, which is the super market we usually go to although sometimes we go to MEGA which is a trip, and then there is my favorite little grocery store which is the one down by the military base and that's where I always get my dish towels and saint candles and one time an old man instructed me that I HAD to buy a packet of pork rinds because they were SO good and I did although I hate pork rinds.

I better get moving. That list isn't going to check itself off by itself.

Yours truly in fretting and in dreaming...Ms. Moon