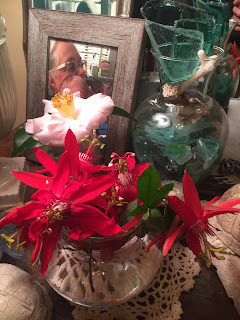 Because it's going to possibly freeze tonight I picked all of the red passion flowers and brought them into the house and set them in a vase because tomorrow they will all be mush. So there they are, looking quite Christmasy although that's not what I had in mind when I picked them.
Of course, for the first freeze, Mr. Moon and I should have spent hours breaking our backs bringing in the tender potted plants but he's not here and for some reason I just don't have the huge worry about it that I usually do. Perhaps it's because I have two newish grandbabies to nurture these days. I don't know. I did cover my Roseland mango and I had to stand on a chair to do it because it's grown so tall this year. And I covered my favorite plants on the front porch and brought a few inside. The ones I could carry, the ones I had room for without bringing in the huge table we keep out in the garage which is too heavy for me to lift on its own.
Anyway, there you have the passion flowers and here you have my babies. 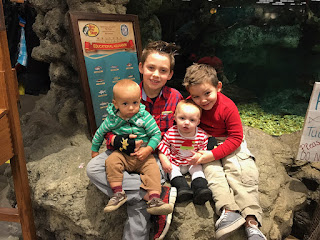 Lily and Jessie took them to Bass Pro World to see Santa and I'm not sure where Santa is but that picture will more than do. August has his oh-dear-Maggie-is-here worried look and Maggie looks a bit concerned herself. I hear that Owen has trimmed his own bangs again, thus the hair gel.
Child!
Why?
Lily and Maggie ended up taking a walk with Jessie and August this morning and they hung out at the house with me when Jessie went to the dentist and it was great fun. August cried piteously when his mother left for about 2.2 seconds and I gave him a graham cracker and he stopped crying and sat on my lap and ate his cracker and Maggie had one too and they even traded bites. They followed each other around the house and played with toys and Maggie conked August on the head with a wooden ball but later on they hugged and kissed.
I am not kidding you. They really did.
After Jessie got back and Lily went to pick up Gibson we met up again at a different restaurant because lunch out is what we do best and we got to sit outside in a garden and although it was chilly, it was lovely and August sat on my lap and helped me eat the ahi tuna on my salad as well as tomatoes and Maggie liked the cream of red pepper soup and french fries and Gibson had chicken tenders and french fries and of his own accord, gave me one of those with ketchup already applied which was very, very thoughtful of him.
After lunch we strolled around back to see the chickens which the restaurant keeps and there were, according to Jessie, seventy-eight of them and they were fine and well-kept and when we walked back to the car Gibson held my hand and I said, "Gibson, I will be so sad when you're too old to hold my hand. Will you always hold my hand?"
"Yes," he said. "I will."
"Good," I said, "because when I am older and can't walk so well, you can help me."
"Okay," he said. "And we have a cane at our house."
Such a helpful little man he is.

It's been another good day and actually, I've felt better in the soul and spirit than I have in a very long time. Almost what you might call...normal?
I suppose.
After this morning almost all of my itching has either disappeared or dropped to a very manageable level in that I am neither bleeding anywhere nor bruised from scratching. This itching has been severe, y'all and the relief of not having it is vast. One can't take Benadryl all day long and expect to do anything besides sleep and that's just the bottom line so I've been suffering except for that one day and I'm just so grateful that it's been so much better today.
I actually did what the doctor said to do last night and took a second Ativan before bed and maybe that's what's helped. I don't really feel the effects of the Ativan in any way that interferes with my day so I guess he knew what he was talking about. I don't even feel numb. I just feel...pretty okay.
Bless that doctor's heart.
And I mean that.

I went to the library and picked out some books which were not written by Larry McMurtry and we'll see how that goes tonight when I get into my cozy bed. Dearie is again not on the roost and I wonder if this is a new thing. I have heard that Banties often choose to roost in trees but that seems so ridiculous- it's cold and she could be snuggled up to Violet in the nest.
Chickens.
And in other animal news, Jack the Cat has taken over the bed from Maurice, claiming his big fat spot on the bed before the sun even goes down. 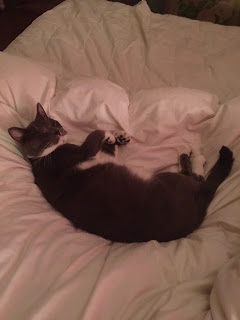 Lord, that cat is getting big. He eats bowls and bowls of food here and then goes next door and eats the food set out for the neighbor's cat. He's known as "Hobo" over there. Poor Maurice. She's totally intimidated by him now and doesn't even get in fights with him because she always gets her face torn up and I suppose she's given up trying to retain or maintain any sort of dominance which makes me sad because she was my first cat baby here and although I have a fondness for Jack, it's Maurice I love.

What a strange thing that we share our lives with these animal creatures who have, within the confines of our own houses and yards, their own very specific societies with their very own specific rules and regulations which we have nothing to do with and very little control over.
Well, as long as they don't shit in the house or piss in the house I will tolerate them and even love them in my own way.

I just got a call from Lily asking if I could possibly watch her three tomorrow while both she and Jason are at work and of course I said I would. So tomorrow will be full too, or at least the hours between 1 and 5 or however that works out. It will be exhausting and chaotic and probably wonderful, all together, and this is my life and it's pretty swell.

I have absolutely nothing of the cosmic or profound to say tonight. I am a sixty-two year old woman who has a warm place to sleep, plenty to eat, lots of love, and quite possibly the correct medications.

I really truly could not ask for more.