There were Rolling Stones on the record player and power bars beyond counting and mixed nuts and chocolate and a tea party and bubble wrap popping and bottles and tumbles and hugs and tears and laughing and timed sessions on the iPad to play games and poops and pees and two books and playing outside and a card game and Gibson's and my version of Monopoly and hot cocoa and a visit from Jessie and August and...
Oh Lord. I don't even know. 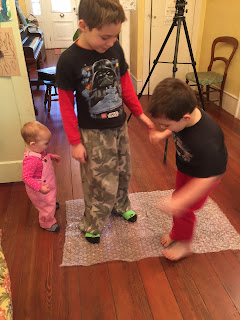 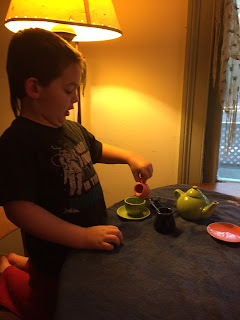 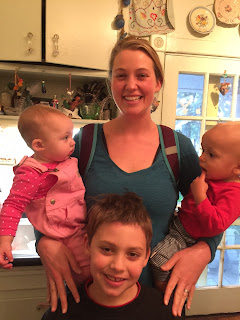 Babies and a big boy. 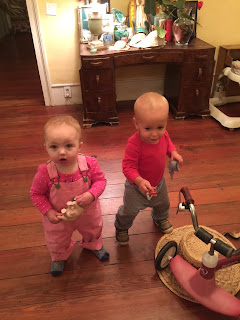 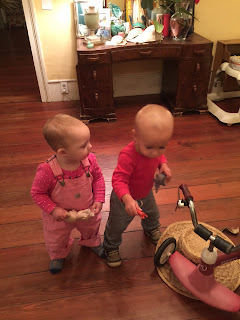 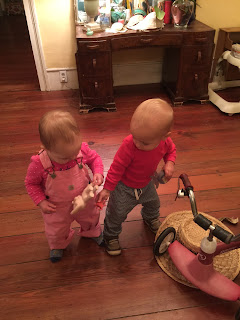 There's just so much to do at Mer's. Hats to try on, trikes to ride, toys to play with, food to eat, towers to climb, swings to swing on, trees to climb, TV to watch, iPad games to play, and on and on and on.

When Jason got here I had just put Maggie in her car seat with a bottle, hoping she'd fall asleep. She was so tired. Jessie and August had already hit the road for St. Pete where they're going to meet up with Vergil. Owen asked his dad who'd been working all day long if they could have Super Dudes night tonight.
"Not tonight, son," he said.
Bless his heart. He works so hard.

And I just talked to Mr. Moon who is on his way back from Tennessee after getting up at four this morning to hunt. So now I have two beloveds on the road at night to worry about.

And I just realized that since I ate my substantial breakfast at brunch-time, I haven't eaten a thing besides one Dr. Kracker cracker and a few nuts. And I'm not even hungry.

It's been a day. But honestly, I feel pretty good and I've got the house mostly tidied up and my sweetheart is coming home and I managed to keep three children alive and well and fed and sort of entertained for five hours and tomorrow I shall rest.