A Christmas Pizza Luncheon Which Was Perfect

So. Today the guilt set in.
A bit.
I went to town and scrambled to get the things I needed and then Mr. Moon and Hank and Lily and her three and Jessie and Vergil and their one met up with us where May works for our lunch and we gave the kids their flat gifts, as we call them, and we gave Gibson and Owen their homemade gifts because those are the ones that matter and we wanted to see them open them. There will be other presents from us under the tree on Christmas morning but these we wanted to give with our own hands.
Before they opened their presents, Owen started in on me. "You're not going to be here for Christmas? You aren't going to be here for Maggie's first Christmas?" And then, "What? You're not going to be here for New Year's either?"
Nope, boy. We will not. And the world will probably continue to spin on its axis.
Still, it was a pretty jolly time and the boys liked their presents.
Mr. Moon has been working on a bear claw necklace for Owen for weeks and weeks. He found the claw in the woods in Canada and brought it home and smoothed it and glued it and coated it and set it up with a brass fishing swivel thing to put a cord through and attached the clasp to it. It is a thing of beauty. 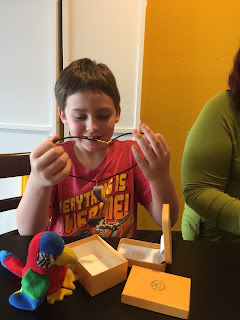 As is Owen. My beautiful Owen boy. 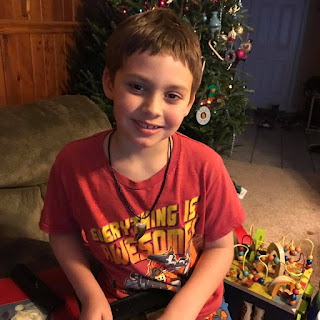 And Gibson somehow knew that what I was giving him was his name blanket. Owen SWEARS he didn't tell him but who knows? And he was so delighted to get it! 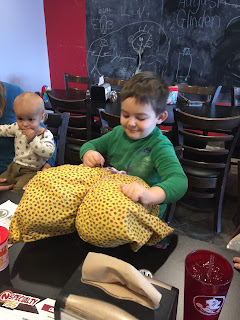 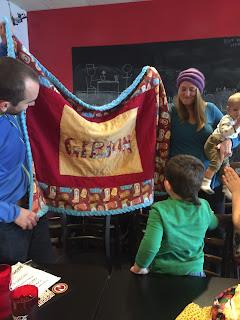 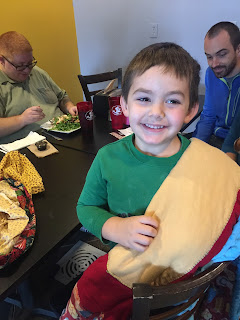 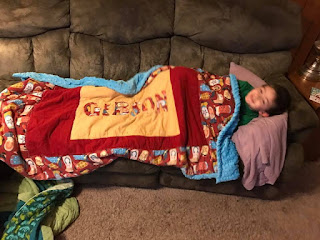 And it was just such a good time, passing the babies about as we do 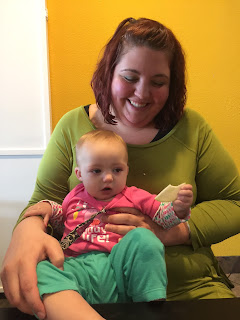 and letting them toddle about some because we were there late and there were very few people in the restaurant and May got to give Owen and Gibson a tour of the kitchen which was just about the coolest thing EVER!!!

And then we all hugged and kissed and hugged and kissed and August blew kisses and waved his hands and said, "Bye, bye, bye," and then the guilt really sunk in but honestly, August and Maggie will have no idea that we're not there for their Christmas and Owen and Gibson will just be so happy to have their new toys from us and well...
Felice Navidad, y'all.

Plus, I bought a Costco fruitcake for May because she's my fruitcake-loving daughter/sister and remember the year that Lily got so upset at the vast amount of fruitcake May and I ate that she took it away from us?
Haha!
So there will be fruitcake and all will be well and on Christmas morning I am going to open up the door to our room and look out and see the blue/teal/green water and we shall have coffee looking at it with the breeze rustling the fronds of the palm trees and my guilt will be as nothing.
Even if there's a freaking STORM on Christmas day, I will get up and have my coffee and look out at the crazy waves and we will eat something off of this menu, 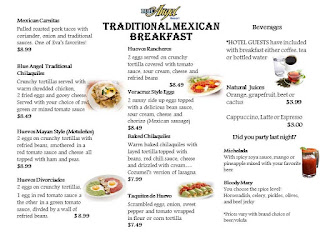 something possibly red and green and that will be all of the Christmas I need.
That and the knowledge that we gave our big boys things we made with our hands and our hearts.