From Lunch To The Cosmos 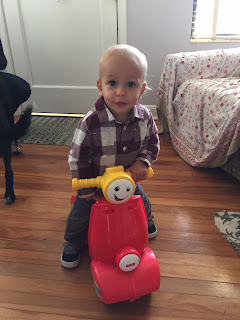 Hank started texting last night about wanting to go out to lunch today and Lily had to work but Jessie was eager to get out and do something because Vergil's out of town and she's been with this great little guy twenty-four hours a day which is a joy but you know- sometimes the joy is better when shared.
So I picked her up and we met Hank and some friends for lunch at a newish place in a building which used to be an old pub and as always, it was fun. We ate and chatted and then Jessie and I took off for other errands. I took a string of pearls to be restrung and we went to Target which is always interesting. When we checked out, I said, "Jesus, Jessie, I didn't need one thing here and I've just spent fifty dollars!"
"That's the way it goes," she said. "If you need something it costs a hundred dollars."
This is a fact of life.
August had a great time flirting and waving and sitting in the basket and going through the things we were buying.
We also went to the New Leaf Market because I needed nutritional yeast and we GOT TO SEE BILLY which is always the best. August soberly watched as both his grandmother and his mother hugged up on this strange man with such obvious bliss. He wasn't sure about that but he tolerated it. 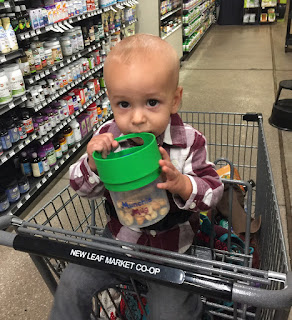 He's such an observer and a ponderer, that one. Those eyes!

We also went to Michael's because I needed more colors of embroidery thread. Need a feather wreath or a gold-sequined pillow to make all of your holiday dreams come true? Michael's is the place to be. We only bought the thread though. The lady at the check-out gave me a discount even though I wasn't registered for that sort of thing just because she thought that August was so cute. Everyone thinks that August is so cute. When we were in Target, a young woman told her boyfriend, "I want one of those!" when she saw him.
"Hmmph," he said.

After I dropped Jessie and August off at their house I still had a few things I needed at Publix so I went by there and got to see my Lily who was working. So it was a good day in town and I'm going back tomorrow because Jessie has an appointment to get her teeth cleaned and I'm going to stay with ol' big eyes while she's gone. She's looking forward to getting her teeth cleaned because she'll be doing it without her baby in her lap.
I remember those days. Oh, yes. I certainly do.

Another day. Another Trump appointment. Another vast dis-appointment. John Glenn has died. I remember being a second-grade student at Sebastian Elementary School in 1962 when he was blasted into space and how the entire school was taken out to the playground to watch the whole thing- Cape Canaveral was just up the coast from Sebastian and it was the most thrilling thing imaginable. America was sending a man into space to orbit the earth and we got to watch.
Oh, the days when our country believed in science and the astronauts (astronauts!) were our heroes, our gladiators against the Russians who had already sent a man into space. It was something, I tell you.

You know, it's been an interesting time to be alive. I think of the way technology has exploded and I think of the music and I think of the Cold War and the assassination of JFK and I think of Civil Rights and women's rights and The Pill and LSD and the computer and The Age of Aquarius and the Viet Nam War and Woodstock and Gay Rights and I think of how the disabled and mentally ill were labeled and warehoused and I think of all the things which we got right in the changes and all of the things we most certainly did not and I see what's going on now and it's hard to imagine a time when sending a man into outer space to orbit the globe three times pulled everyone together in a sort of pride that we'll probably never experience again.

But it happened. Trust me. There was a true and honest interest in the vast exploration of outer and inner space and it changed things.

We must have faith.