This Is How It Is 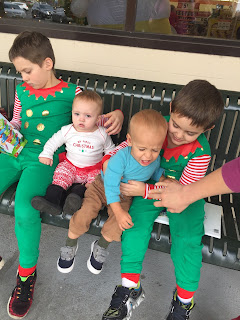 I gave up trying to get a "good" picture of all of the grands today and this is what you get and with the exception of August crying, which he doesn't usually do, it's fairly accurate as to representation. August was tired and ready for a nap and also, to be honest, he's a bit scared of Maggie. By the way, it had been pajama day at school, thus the elf pajamas. We'd already had our Japanica! lunch which was, as Hank said, "barely controlled chaos" but it was delicious. I never get tired of the green curry tofu Bento Box. It's always a bit different, depending on what vegetables the chef has and it's like getting a fancy box of tasty presents if you ask me.
August was all about his Mer today, especially after I took him to see the Maneki-Neko, or "beckoning cat" and don't be impressed that I knew that because I just looked it up. 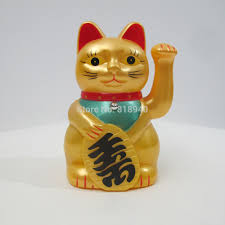 He waved and waved and waved to the cat and the cat waved back and we also looked at the two fish in the tank by the sushi chef's counter. They are not for eating, but for decoration, those fish, although one of them seems to hide in the castle all of the time. Perhaps he is the wiser of the two.
Anyway, August kept holding his arms out to me and of course I held him a lot and he gently explored my necklace, my earrings, turning my head this way and that to get better vision of them. He also kissed me without provocation which was a first and Maggie gave me some kisses too as well as her fabulous strong, spontaneous hugs. That girl is a cuddler!
After the restaurant, we all went to the Goodwill bookstore because that is what we do. I bought so many kids books and a few games as well. Not-going-to-be-here-for-Christmas-guilt may have kicked in a little bit.

So it was just a wonderful afternoon and Owen asked if he and Gibson could spend the night and they are on their way over right now. They want hamburgers and so there shall be hamburgers and I have bought all the necessary ingredients for Green Purple Cows (grape juice, ginger ale, lime sherbet) and have picked kale to go on Owen's hamburger and it shall be a good evening, I am sure and hopefully, they'll let me read them some books. Owen's reading is coming right along and he was asking Hank how he learned to read at the age of three (a family legend but true) and Hank told him that I'd read him lots of books and he loved them so much that he wanted to learn and so he did and then Owen asked him what book he'd read first and Hank began to recite "Go Dog Go" and then "Where The Wild Things Are" and Owen was most impressed.

Just another typical day with the grandchildren, which is to say, yes, barely controlled chaos, but such wonderful chaos. The boys will be here any moment and will burst into the door with their pillows and blankets and whatever else they might need (they are, after all, already wearing pajamas) and then Mr. Moon will be home soon and I am glad for all of this.
Even an excuse to eat hamburgers and not vegetarian ones, as Owen carefully instructed me when we were discussing the menu.

I hope we all have good Friday nights whether we are out celebrating the season with fancy drinks and wearing sequins or staying in and celebrating each other with Green Purple Cows and wearing overalls. Or elf pajamas.

Martinis for the adults may be involved.