And Why And Where And How And Who?

Today I have been a completely useless human being. I even slept a few hours this afternoon. I just couldn't gather or garner the energy for one damn thing and so I was simply...lazy.
La-di-dah.
I've been working on doing the stitching around the letters on Gibson's quilt a bit and I enjoy that so much. Mr. Moon is watching a football game so I've had my earphones in, listening to another Fannie Flagg book which I have read before but who cares? At my age you don't remember what you've read anyway, so it's all vaguely new to me. I've also made another soup- just what we need, right? This one with split peas and butternut squash and it smells delicious. 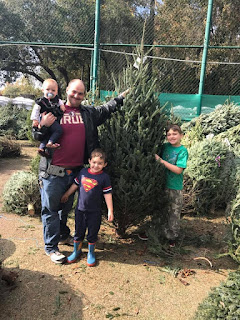 The Hartmanns got their Christmas tree today.
And here they are decorating it. 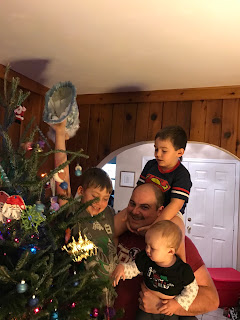 Aren't they the loveliest family?

I remember last Christmas when August was just a teeny babe and Lily was so pregnant and I said, "Can you believe that by this time next year we'll have two toddlers?"
And so we do and I'm still having a hard time believing it. When I'm babysitting for Maggie all I do is follow her around as she goes from one activity to another. If I sit down, she comes to me and wants me to hold her and throws herself into me and hugs my neck and then she either wants to smack my face and say "Ow" or else have me put her down. There's very little gray area with this child. She reminds me so much of her mother when she was a baby except with a better disposition. Lily was the sort of child for whom the concept of playing by herself was completely foreign. She demanded attention every second of the day. When Jessie came along I felt that she was the easiest child in the world because she was what I called my "project" baby. She would make a project out of moving blocks from one place to another or arranging her toys in specific ways and was happy to do these things of her own accord for long stretches of time. All of the children are so different. I watched Gibson the other day as he was playing by himself. He creates scenarios in his head and acts them out. He speaks all the roles and uses props, too. Superheroes always seem to be involved.

I wonder about his and Owen's fascination and even obsession with Superheroes and Pokemon. Where does this come from? If we lived back in the early days of humans, would they be obsessed with animals and their habits and traits and would their heroes be the best hunters in the tribe? Would they listen with great shining eyes around the fire as stories of hunting and hunters were repeated? I can see how this sort of tale and truth-telling could be important in the life of the family, of the tribe. Young boys had to learn to hunt and the best hunters were probably some of the most valued members of the community.
Quite a leap from the killers of saber-toothed tigers and mastodons to Flash and Pokemon but somehow I can make the connection in my head. It's no secret that teenaged boys have brains wired to allow them to disregard risk and danger and that no doubt comes from the times when they did hunt the animals which both threatened and fed their people and their tendencies to form packs and gangs are part of that. There is no longer any need for them to go out and risk their lives with other boys and men to bring home the great beasts but the wiring is still there.
As is the wiring to recognize and vilify the "others" not of the tribe, I'm afraid, as well as the urge to impregnate as many women as possible.
I mean, this is a vast oversimplification but I think we can safely say that civilization frowns upon such activities now and yet, channeling these deep impulses is tricky. Sports are probably as good as anything for this. The whole team thing, the individuals working together for a victorious end. And I'm sure there have always been the people who came together for other, non-hunting related activities and thus we have bands and clubs and drama productions.
There have probably always been the artists who wanted to create the stories, make the music, create the dances which became the myths, the religious rites, the mystical cave art which helped to ensure the success of the hunt, the harvest and thus, the tribe. The ones who studied the stars and wondered and the ones who studied the seasons and tides and how the placement of stones could create walls and arches and pyramids and castles, palaces and coliseums, temples and cathedrals, roads and great walls. The ones who looked at the sea and imagined boats made of wood or reeds and risked their lives sailing off away from their own known lands to explore and discover what was beyond that flat-looking horizon.

And of course the woman who did all of those things too and were, according to some, the ones who began to collect seed and plant in the spring to provide the grain they had figured out how to make into porridges and breads when meat was not available, the berries that they could dry which would sustain them through the cold, game-less winters, who domesticated the chicken which would lead to yard-protein, easily available, who figured out how to take the clay from the banks of the rivers and the reeds from the edge of the lakes to make vessels to hold the grain, the dried berries, to carry the water, to tan the hides to create clothing which would protect the humans from the harshness of the seasons, the foot from the thorn, the body from the cold, hard ground when it was time to sleep.

I so often wonder about the first woman to realize that leaving her mixture of ground grain and water out so that the yeast of the air would settle into it would cause it to rise and thus, to be more easily eaten after cooking. I think of those who studied the plants growing around them and began experimenting to see which of them could ease pain or childbirth, could help sustain life when game was scarce. I think of them handing down the lessons they'd learned along to their daughters who learned even more and how they began to distill oils and dry the plants and learned to preserve them for the seasons when the plants were not available.

So much that humans have learned and the quick jump from then to now when we create new video games and rely on social media and watch shows on how to cook and I wonder- what next?
What next?

I tend to go backwards with my growing and cooking, even as I depend on refrigeration and the global economy and books downloaded onto my phone. And I see my grandchildren decorating their Christmas tree which comes from the Pagans, or someone before them, a ritual to remember that even in deepest winter, there will be new growth in the spring, that green life sustains us, both in body and spirit.

We may not have the vaguest idea of why we do the things we do, whether it is to cheer on a sports team or decorate with Christmas lights or get huge pleasure from cooking a pot of soup or playing, as a child, a superhero but there is always a reason.

Well, I had no idea that this is where I was going tonight when I sat down to write but there you go and here we are. I am just so very grateful to have a cozy place to sleep tonight, a kitchen in which to cook the food we eat, the ability to buy ingredients that I did not necessarily grow nor did my husband hunt. The spices, the fruit, the vegetables, the meat. I have the woven sheets to sleep on, the down pillows to lay my head on, the books to read which have been written by people all over this world which allow me to enter the windows into their minds and worlds which I never would have the opportunity to visit or know. The needle with which to sew, the knowledge which was given to me to use to take advantage of all of these things.

I watch my grandchildren as they learn to walk, to talk, to create their own worlds in their own heads, to take what they can use at the proper time to grow into fully functioning human beings. To read, to wonder, to question, to learn, to manipulate, to replicate, to take on or discard as they, in their own unique and human abilities, are able to do, even as they as are able to imagine things which have not yet been imagined, to seek answers to questions which we do not yet have, even with our giant telescopes, our computers, our vast human brains.

And I have hope.

In my best moments, I do.