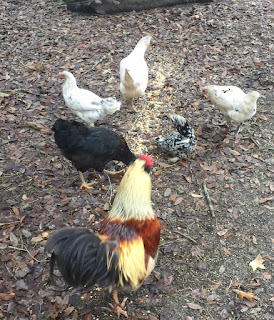 As Mr. Moon was making his bowl of cereal this morning he said, "Have you seen Dearie lately?"
"Not in two days," I said.
Next thing I knew I heard a frantic squawking and here came Dearie, flying across the yard from wherever she'd been and so I went outside and opened up the door to the hen house and threw some scratch and she settled in to peck surrounded by the other chickens. Then Mr. Moon found two bantie eggs in the pump house and that little hen is crazy, crazy, obviously.
I don't know if she's hanging out with a neighbor's flock or living on her own but she is very hungry this morning, still out there pecking at scratch after the rest of the birds have moved on to the next part of their stations of the yard.

The other day when Lily and I were in a Goodwill, John and Yoko's Happy Christmas came on the Goodwill radio and I teared up.
"Oh, Mommy, it's your favorite," said Lily. Maggie was bundled in her little carrier against her mother's bosom, and I stopped what I was doing for a moment to listen.
"It's okay, Maggie," said Lily. "Mer always cries when she hears that song."
The tears spilled over and I said, "We haven't done very well with that, have we?" as John and Yoko and those children sang out that war was over.
We must not want it.


Love...Ms. Moon Who Is Feeling Crazy, Crazy Like Her Little Hen
Posted by Ms. Moon at 9:18 AM