Another Fun Day At The Junior Museum 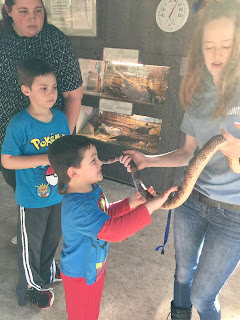 Got absolutely nothing on my list done today but hell, it was sure a fun day at the Junior Museum.
There the boys are during the snake exhibit where we all got to touch the lovely pine snake (who is thirty years old!) and we sat and learned so much. Owen had a million questions about snakes and he knew a lot of facts already. As the young lady talked, the snake twined and wound itself around her, it's tongue darting and flicking and Owen asked why some of the snakes had red tongues and some had black and she did not know but the highlight of the entire snake experience was when the rattlesnake shat upon the pygmy rattlesnake's head in their shared enclosure.
This is what Owen and Gibson will remember about this day for forever and ever and frankly, I'd never seen a snake poop and it's gross.
"How do snakes clean themselves?" Owen asked the young woman.
"I really have no idea," she said, and we shall all be pondering this tonight, I am sure because when we left, the boys went back to check and see if the poop was still on the pygmy rattlesnake and it was!

Here's August looking at the turtle. 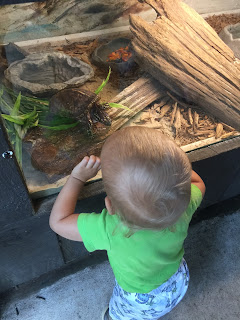 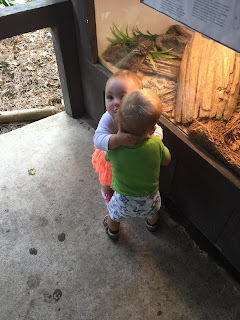 We saw a fox and wolves and eagles and otters and two bears and vultures and an owl, and a bobcat, and deer. Maybe other stuff. I forget. 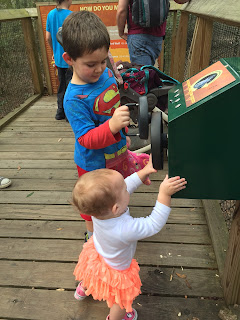 This is a device that when you spin the wheel, makes the calls of different wolves and the coyote. Maggie was helping Gibson. Can you believe that tutu skirt?

We went to the old farm and August was terrified of the farm animals. There's a cow there who does this thing when she eats which is to raise up her head in an unbelievably fast motion. She could seriously break your arm if you were stupid enough to have it in there. And the last time August went to the Junior, this motion scared him to death and as soon as we got to the pig he realized he was in the same place with the killer cow and cried inconsolably. Owen and Gibson thought the cow was hysterical and Owen kept standing by the fence as she ate and when she'd do the rapid head raise, he'd act as if he were so shocked that he fell over backwards.
He did this many times.
It never got old.
But August was having none of it and even the chickens and turkey made him unhappy although he did point to the sheep and call them "Baa-baa's." I was holding him and said, "Do you want to go see the baa-baa's?" and took a few steps closer to them and he began to cry again so I said, "Oh, let's just go see the old house," which we did and which I love. The simplest of examples of an old wooden cracker house and it was built around the 1890's and was moved to the farm exhibit back in the 1980's, I think, and we always look at it and imagine what it would have been like to live in those simple rooms, to cook on that woodstove in the Florida summer heat, to have no screens or running water or electricity. The funny thing is, is that my own house is about thirty-five years older than that house but it was obviously built by people with means, not by a poor cracker family making their living by whatever they could dig up or scratch out or perhaps distill from corn. The plaque there says that the family who built the cabin had eight children.
Eight children.
I cannot even begin to imagine.

Anyway, August didn't care much about any of these facts but he calmed down and we looked at the garden out back which was not as nice as my garden but which held basically the same vegetables. And of course we ended up at the playground and Boppy swung August in the swing. 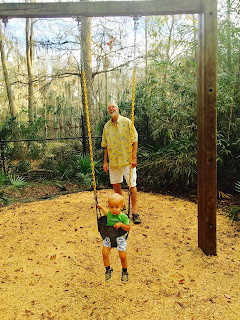 And then they played a game where Boppy knelt in front of the swing and kissed August every time he came up to Boppy's face and August thought that was hysterical and giggled and pursed his little mouth. Then Lily put Maggie in the back of the swing and Boppy tried to kiss her the same way but she wasn't as impressed. 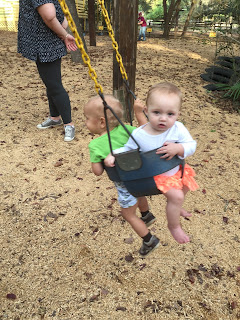 Oh my goodness. Am I really going to leave these precious babies for two whole weeks? And Gibson and Owen? When we got there, Owen ran to me like he was an Olympic sprinter and Gibson was right behind and here came the babies, toddling towards me so I hoisted them both up on my hips and it's just the most heartwarming and gratifying thing to be loved like this. 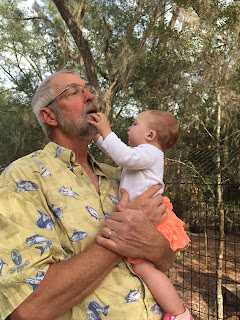 To be part of these little human beings' lives, to be recognized by them and hugged by them and kissed by them. Gibson held my hand as we walked along the boardwalk above the wild animal enclosures and he said, "I love being here with you, Mer!" and I said, "I love being here with you, Gibson," and I thought about how precious this time is when the children are so nonjudgemental about how you look or act and simply love you to pieces because you love them with all of your heart and soul.
It's the most amazing gift I've ever been given, truthfully. Your own children sort of have to love you, at first, anyway, because you are their protector, their world, their source of nutrition and care and love. But our grandchildren?
Ah, we can only woo them with our hearts and our listening and our stories and our arms and our kisses and our enthusiasm for each and every new thing they learn.
And to have them respond to that is absolutely joyful.

So. Two weeks without them?
Ah well. We'll probably all live. They will all have changed by the time we get back because that is the magic of children. Owen will know more and Gibson will too and Maggie and August will be walking even more confidently and will have more words and more curls and hopefully, their Mer and their Bop will be calmer and happier and even sillier and ready, ready, ready to come home to their hugs and their kisses and their big eyes and new accomplishments.

I'll start checking things off my list tomorrow but today was a day for being with the babies and nothing could really be more important than that.