The Miracles Of The Bouncy House And The Free Tropical Ice, Plus Love

I've hit a point right now where I just can't deal with any more pain for the moment.
It's like my brain has tossed this fantastically hideous and unbelievably heavy rock of reality around so much that it's exhausted and for this second, it's just set it down in a dark corner, letting me think about something else for a little while.

I was in a horrible mood this morning. Just horrible. Lily and Jessie came over and I didn't care if we went to the farm with the kids or went to the barbecue festival in Lloyd or went down to the river and jumped the fuck in.
I was ugly. I was being ugly. I was talking ugly and I was not much fun to be with as we all piled into Lily's van and drove to a local place called Aunt Louise's Farm. One of the first things I did when we got there, before we even got out of the car, was to gesture to a woman whose hair was stuck in the eighties and say, "I'll bet she voted for Trump."
"Oh, mama," my girls said. We'd all been talking about things and wondering what horrors were to come and we all had our safety pins pinned to our shirts but here we were, at Aunt Louise's Farm with four children and goddam it, it was a beautiful day and why not just try to enjoy it?

And we did, after I calmed down and quit being a mean old bitch. We walked through the corn maze (and why don't they call it a maize maze?) and the mystery of it was greatly diminished by the fact that all of the corn stalks were dead and brown and we could see everything everywhere and the dust of the paths was so fierce that it could have given us pneumonia and I got a lot of my bad mood out by making fun of it all and asking repeatedly just why we were doing this because it really wasn't much fun and Lily was having a devil of a time trying to push Maggie's stroller through the loose dirt and we kept commenting on the scarecrows' outfits, many of which were better than the ones I wear on a daily basis. 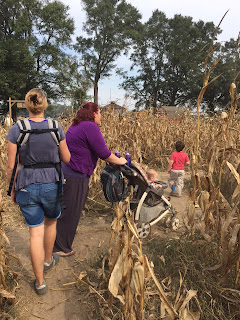 Plus, there was this one.
I had to laugh. 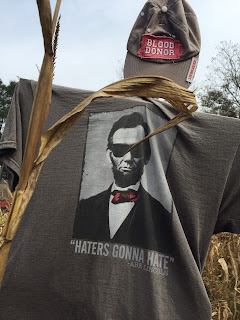 After we found our way out of the maze (we cheated when we were tired of it and just walked right out) we went to the great vats of corn that the children could get in and wallow in and crawl around in and well, do whatever it is that kids do in great vats of corn. 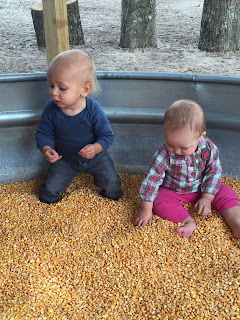 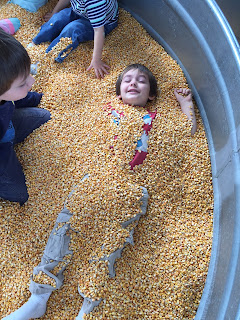 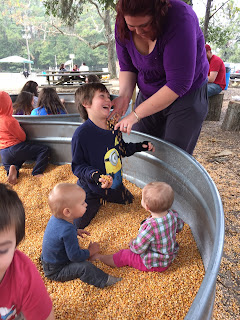 August took to it as if he'd been born to end up in dried corn and Owen and Gibson had a great time too and Maggie was interested but not quite sure of what to make of it. Mostly she wanted to eat the corn which makes a great deal of sense.

There were bunnies to gently hold (and if this is cruel treatment of animals, I'm sorry but it was very supervised) 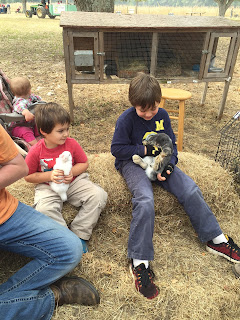 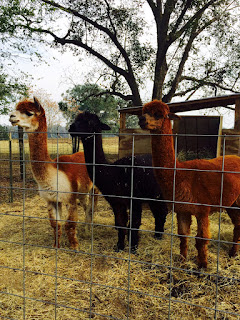 (and as you can see, these were professional alpacas who knew how to pose properly) and goats 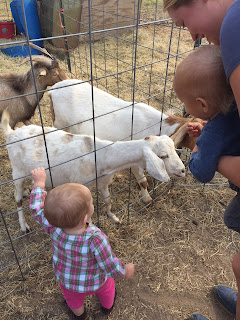 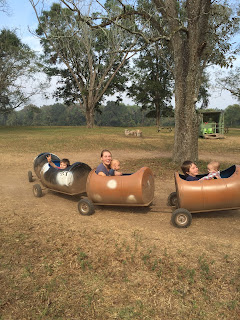 and a silly place to stick your head through and have your picture taken. 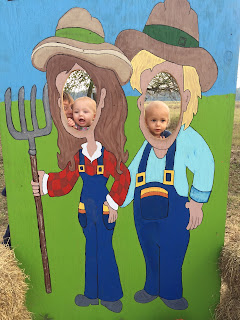 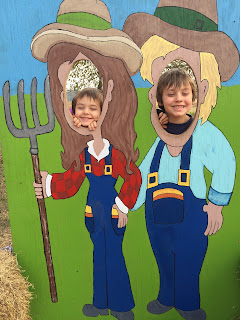 It was a sweet little operation, all told, and even the port-o-potties were as pristine as I've ever seen and simple and easy and there were people of different races and even some interracial couples and all anyone seemed to care about was taking pictures of their kids in the corn vats and just enjoying the day.
You know. Good old American fun, as it were, and I just couldn't hold on to my anger. I was too busy holding on to my grandbabies.

So after we left the farm, we decided to go to Monticello for lunch and Owen and Gibson were not happy because
(a) They'd wanted a snow cone at Aunt Louise's and hadn't gotten one, and
(b) We'd discussed going to the Barbecue Festival and they remembered the bouncy house there from last year and were NOT HAPPY that the bouncy house option had been eliminated.

So. This is where it gets funny.
We're driving down the street to get to the pizza joint where we'd planned to eat lunch but there, right in front of the Mexican restaurant in the middle of the blocked-off street, is...a bouncy house. 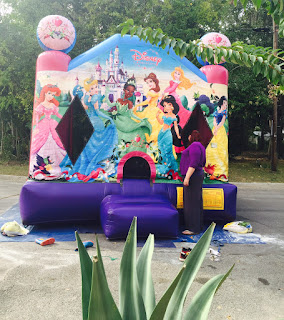 Because nothing says Mexican food like a Disney Princess bouncy house, right?
And so we went to the Mexican restaurant and ate outside and the kids bounced. Even Maggie got to have a little bouncy fun. 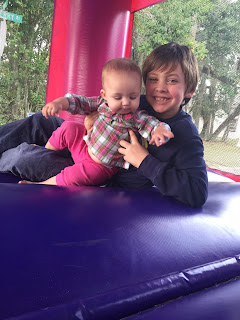 And while we were eating a huge RV pulled up filled with kids of various ages and nationalities and possibly a few parents and that got added to the fun and we all ate Mexican food right there in Monticello, Florida which is naught but a tiny town in a North Florida redneck county.
And you know what?
It was fucking cool and the kids were so happy to have gotten their bouncy house dreams come true but they were still a little bit upset about the snow cone situation. So we were driving out of Monticello, heading to Lloyd when what did we see parked next to the Opera House but a TROPICAL ICE TRUCK and so we had to stop and Lily and Jessie got out and ordered up Tropical Ices for the boys and themselves and by golly- they were free.
Turns out that there was some sort of literacy festival going on in Monticello and so...Free Tropical Ice for all!

I have no idea how all of this happened but it did and so there you go- tiny miracles and magic and I'm going to hold on to all of that.

Hell and fuck no, this does nothing to ease the fact that DT is the president elect and that we, the citizens of this fucked-up country elected him. But it does remind me that not everyone voted for him and that there is still good. There are still beautiful fall days in beautiful small towns where families can go to have a good time with animals and corn and that little boys' desires can be fulfilled and we need to hold on to that.
THAT is normal, not the nightmare going on. And we have to do everything in our power not to let the nightmare become normalized. To fight against anything that takes away the rights of anyone to enjoy a day like today.

Yeah. I'm being corny and sentimental but I just spent a day with my grandkids and Owen sat in my lap for a moment, snuggling up against me which he so rarely does anymore and I made August laugh a lot and Maggie smile a lot and Gibson told me for the one millionth time that he loves me.
So if love trumps hate, I got a sweet taste of that today and for right now, this second, I'm letting that hideous and heavy rock just sit all alone in the dark part of my mind and I'm letting the light shine on the parts which are still pure. God knows I'll trip on that rock again and again and again and it will hurt over and over again but right this second, I can't torture myself with it. I need to regain my strength in order to pick it up and deal with it and there is no doubt I am going to need to deal with it as we all do and will do.

And we need to remember exactly what it is that we're standing up for. We need to be nasty women and bad hombres in the best, most fervent sort of ways.
Which requires strength and a sense of purpose.

I found some of that today and I feel the better for it.