A Different Sort Of Year

Traditionally, it is not actually Thanksgiving day that I look forward to the most.
It is the night before Thanksgiving when there is music.
I used to host a party every Thanksgiving Eve to make sure this music happened. I mean- I worked my ass off, not just getting ready for Thanksgiving itself, but making that party for the night before. You can only imagine. And those were the days when I always had Thanksgiving here, before Lily and Jason took the hosting off my hands.
But it was always worth it and magical and there were usually oysters and a fire and the music, played by people I love and have known since forever and ever and this house was filled with light and people.
Some years ago, my ex-husband, who is one of those musicians, started booking a gig that night for himself and his best friend from childhood, a violinist who lives in Nashville now and who always came to the party too.
I have been pissed and relieved, both at the same time. The burden of the party was taken from me but so was the magic.
Last year's gathering was chronicled here, for those of you who might remember or care to know.

But tonight- I ain't going. And Lon and Lis are even going to be there as they are staying in Monticello for the holiday with Lon's sister's family.

I just can't. I don't have the energy to get dressed to step out the door. I simply can't, even though I slept for at least an hour and a half this afternoon. I just feel like shit and that's all there is to it.
My heart is sad.

I cooked my greens today. There were so many I had to take a break in the middle of cutting them. 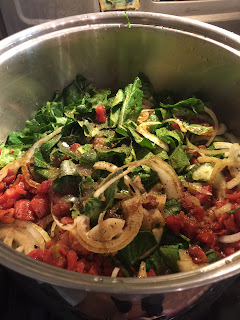 And they will go back on the stove tomorrow to boil down that pot liquor or, as we call it these days, the reduction. Or something. Fuck if I know. These greens are not your steam-until-bright-green greens. They are the cook-until-they-are-so-tender-you-can't-believe-it greens. This is the way it is properly done and that is that.
I do break with tradition in that there is no pork in those greens at all. No bacon, no ham, no pig. They'll be good though. I know they will be.

The last thing I've done tonight is to bake the pies. The regular pecan pie is still in the oven but here's the chocolate pecan pie. My pie dough is iffy this year but it'll be what it'll be.

And tomorrow all I have to do is to make the stuffing and get that bird in the oven and simmer the greens some more and whip the cream and put it all in the car and get to Lily's house by three.

I think I can do that.
I won't be getting up after a late night and my house is not filled with children sleeping over at Mama's and wanting coffee and breakfast and watching the Macy's Day parade while I cook and chop and boil and simmer and heat and roll out and so forth while everyone helps and gets in the way and makes me laugh and there are so many kisses that they can't be counted.

Well. I had those days, I did it for forever and things change and we move along and I'll get my kisses at Lily and Jason's and next year I'll hear the music, good Lord willing and the creek don't rise, and it's Thanksgiving Eve and I wish all of you the very, very best.