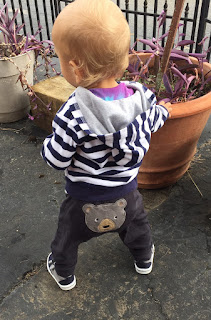 Mr. Bear Butt has a wide stance, doesn't he? He and Magnolia toddled around after lunch in a little patio area and Maggie slipped in the one puddle and fell and got her dress wet but her mother had a spare which was adorable. 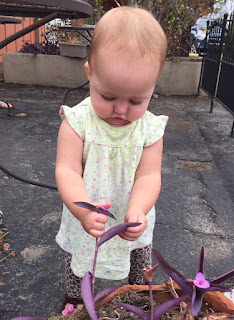 We ate Middle Eastern today, falafel and hummus, dolma and chicken shawarma.
Maggie and August sat in their high chairs right next to each other and gave food to each other and then stole it back. They like Middle Eastern as much as they like Mexican and Indian and anything else we give them. Which is to say- a lot.
Gibson ate french fries. Mostly.
Both babies are getting very reliable about giving kisses and when we said our good-byes, we were all blessed with baby kisses. I went with Lily because we came in together and Gibson was not sure about me today at all. I have no idea why.
"Are you coming with us?" he asked.
"Yes," I said. "I am."
He did not look too happy about that.
We went to Publix, Lily and Gibson and Maggie and I and bought BOGO cat food and other things and I got my prescriptions and am still boggling over the fact that I have a bottle of many Ativan when for so long, I have done everything but sell my body on the street corner to acquire a few. I have not taken one, but if I need one, I certainly have it.

After that, I went home with Lily and Gibson and Maggie and stayed with the children while Lily went to a parent-teacher conference for Owen. Maggie is extremely mobile these days, walking everywhere and far more quickly than you would think she could. Mostly I followed her around and took acorns out of her mouth (outside) and prevented her at the last moment from getting into the litter box (inside). She did get her hands on a glass of cranberry juice I'd given Gibson and before I could stop her, had put it to her mouth and tossed her head back and halfway drowned herself in the juice.
Another costume change was in order which did not bother her in the least.
Gibson is a good big brother and would announce, "She's got an acorn!" or "Maggie's chewing something!" Lord.
Anyway, by the time Lily and Owen got home I was mostly just glad that the child was still alive and I came on back to Lloyd and let me note that Gibson had, by this time, changed his mind about me and asked if I couldn't stay on for "four more hours."

For supper tonight we are having chicken posole, or at least the Publix version of it. Lily has made this recipe several times and strongly recommends it. 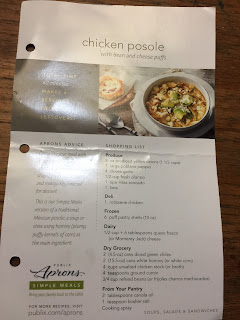 Of course I cooked my own chicken and have added this and that including tomatoes and greens from the garden. This will be about the fifth dinner in a row I have served which is to be eaten with a spoon but I don't think Mr. Moon cares. Sometimes, when we have soup for supper, he announces before he eats it: "Fuck you, Jay Leno."
This is in reference to a thing Jay Leno said somewhere which was that "Soup is just a way of screwing you out of a meal."
I would beg to differ.
But each to his or her own.
And perhaps Mrs. Leno does not need the therapeutic effects of making soup as much as some of the rest of us do. If this is true, then bless her heart.
Bless Jay's too while we're at it.