It's mighty nice to get an "extra" hour of sleep but damn, it's messing me up. Why do we do this to ourselves? And why do I keep talking about it? Every time change I bitch.
Oh well.
At least I'm consistent.

I had a good time with Lily and the kids today. Not too long after breakfast, which was more like at lunchtime so it would have been brunch if cantaloupe had been involved, Maggie and Lily took a little nap on Mer and Bop's bed. 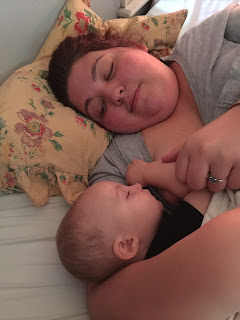 The boys played outside some and watched TV some and asked for smoothies.
Yes. They asked for smoothies.
So I made them smoothies with all sorts of fruits and yogurt and they drank them up.
Those are some weird children although I will admit that they both asked for chocolate (I didn't have any, much to their dismay) and Gibson wanted a pickled okra, which I did have and which made him so happy.
We played the matching game and that was fun and then Lily and Maggie woke up and it was time to go and trying to get those boys out of here was like trying to get a piece of heavy machinery out of here but they finally got in the van and I kissed them all and away they went on their merry way to their next adventure.
I took a little nap.

I just haven't felt like doing much today and I haven't. Mr. Moon just got home and I have some spaghetti sauce simmering on the stove and bread rising and damn if I feel like even eating any of it. Maybe by the time it's done.
I think I'm in adrenalin dump today. Ah lah. These things happen.

I really should keep a notebook around when the boys are here. They say and do so many things that crack me up. When we were playing the matching game, Gibson caught a match that Owen and I missed and Owen said, "Give me five," and Gibson did and then Owen put his hand down flat and said, "In the grass," and Gibson slapped his hand and Owen said, "You passed gas," and Gibson said in the most serious of tones, "That's new."
And play proceeded.
I laughed my ass off.
And let me say that Gibson STILL runs to find me when he hears the train coming and wraps his little body around me and lets me hold him tight.
He did that today and after the train had passed I said, "Phew! That was close!"
I love it so much that I don't even try to convince him that he was in no danger. I'm like a sixteen year old boy who takes his date to a horror movie in hopes that she'll pretend to be scared and grab on to him when the guy in the mask jumps out of the bushes with an axe.
I'm shameless and a complete hug-whore.

Two more days until the election. Speaking of horror movies.

Let's hang in there, y'all.