A Sort Of Miracle 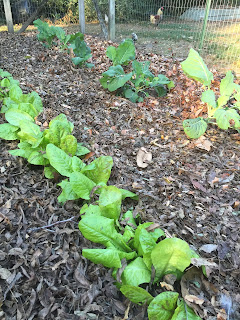 Well, I didn't get every square inch of the garden covered in leaf mulch but I got all of the vegetables mulched and that makes me feel very, very good.
In so many ways.
This morning I was redlining on the anxiety but by late afternoon, I had calmed down in direct proportion to the tiredness and ache in my joints. This does not always happen but sometimes it does and I am so damn grateful that I can't even tell you.

I came in and washed up and made a big pot of venison and vegetable soup with sweet potatoes and red wine. I put three types of greens from the garden in it- collards, mustards, and kale. I've got a loaf of wheat and oat bran bread rising nicely too, and it will be a good and simple supper and for once, I'll probably be able to enjoy it. This feels like a damn miracle.

It was odd to read that Fidel Castro had died this morning. I thought again about my trip to Cuba last June and how that particular time seemed so fraught with history. Changes were coming about, slowly but surely. Obama had just visited, the Stones had just played, and Fidel was still alive. It was obvious that some private businesses were being allowed to operate and thrive and the state-run Fabrica de Arte Cubano was hot and happening. And by the way, if you're on Facebook, you can search for their page. They post regularly about the artists performing and showing there.
I look at the pictures I bought at the fine art museum in Havana which I bought and had framed every day and I think about that trip and what it meant for me. It was, in a way, a huge thing. First of all, that I did it and I never would have done it without Lis and her encouragement, and trusting in the group that I went with. And I think about the way it showed me that I could not make judgements about Cuba and its people and its government and that I could see no black and white answers to any of the questions my time there engendered. It was vastly more mysterious to me when I left than it had been when I arrived.
And I think that Fidel Castro probably engenders the same mysteries. I am certainly not an apologist for him but I will say that I think he began with a noble idea. And I think that he was a human being and that power probably got in the way of his original intent and many, many mistakes were made.
But I don't know.
I just know that the people I met in Cuba were beautiful people with hearts wide open to us American visitors and that they loved their country and that I will ever be grateful that I was able to go.

And this is what I'm thinking about this evening, even as I have insulated myself the last few days against anything and everything I possibly could. Today I made it out of my house albeit only into my yard, but I got something done and I feel so much better for it. Honestly, yesterday, I don't think I could have made that little move. So there is that.

And hey- while I was still stuck in my house, I got the kitchen mopped and a few shirts ironed and that ain't all bad.

And I think that little Dearie is now laying me her own tiny eggs.
Sweetness.