And Now It Is Night

Boppy saw a bear on the way home tonight, just about a mile from the house. He was crossing the road right near where the guy with the junk for sale and the NO MAN LORD sign lives to the other side which is woods. "He wasn't too big," Mr. Moon reported, "Just about a hundred pounds."

I shut the chickens up good tonight. Bears love chicken as much as everything on the food chain does and they can tear a coop apart.
Drogo's sleeping at home tonight and Chi-Chi or Cha-Cha is once again in the nesting box with Elvis. I can't figure it out. We got three eggs today. I cooked two for Gibson and one got broken by a pair of flamingos.
Don't ask.

But it was, despite all of that, a very good day. We played outside some and Owen fed apples to Muley who lives next door. 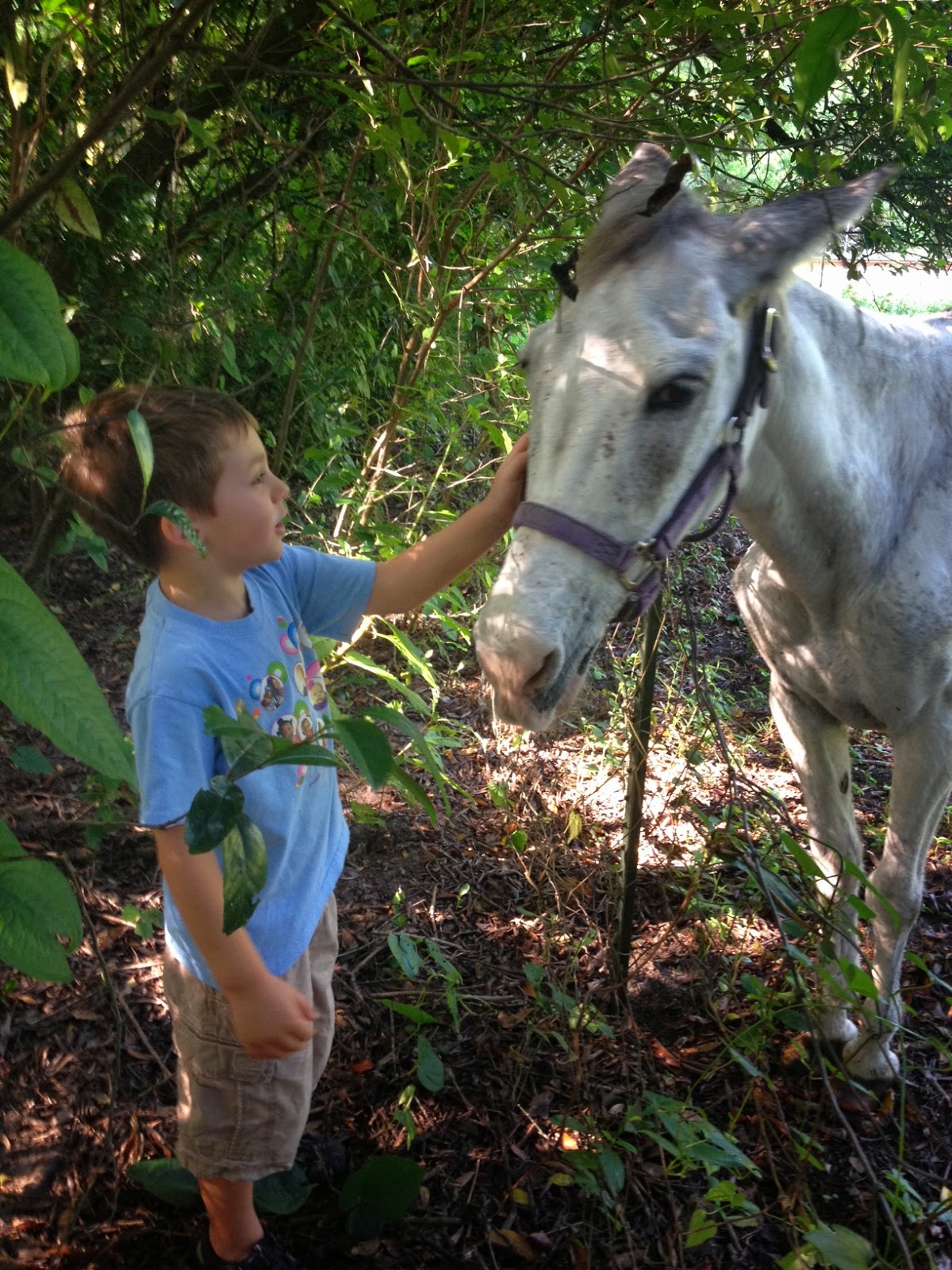 Muley must be a hundred years old. She walks so slow that the has to start at the age of the dinosaurs to get to the fence by the appearance of the first humanoid. But she loves apples. And Owen.
Gibson fed leaves to the goats. He can get around good but he likes the stroller too and he loves for me to carry him.
Here's what he says when he wants me to pick him up- "I need you."
What are you going to do? He needs me. And it can't be easy, lugging that cast around.

I have learned today that I can still cook with a baby on my hip. Mr. Moon was late due to a very important meeting. When he came in the kids were overjoyed. I was too but was too tired to do more than kiss him and hand him a baby.

Lily sent the boys a letter a few days ago so that they'd get it before she got home. It came today and Owen was so thrilled. A letter for him! In Lloyd! And it had a picture in it of his mama and his daddy. He was so proud. I was proud of Lily for thinking to do that. She's such a good mama.

And now the boys are in bed, bathed and worn-out as two boys can be. They ran around the yard and the house like crazed crack-addled jackrabbits all day long. They were dirty as Huckleberry Finn and when they were getting ready for bed, Boppy kept doing a trick with a blanket, snatching it over Gibson to make him laugh, and Owen stood on the bed and hugged his grandfather around the neck and said, "Boppy, you make everything fun."
He told me several times  today that this was the best day of his life.
I told him the Mr. Peep story again tonight because he asked me too. He fell asleep during the telling of it and Gibson had to have his grandfather come and lay down beside him, which he did, and he fell asleep during Mr. Peep as well but a lot faster than his brother.

So that's it. That's the news from Lloyd on a Wednesday night. There's a bear down the road, and probably more than one and two boys asleep and a grandmother and a grandfather who will be asleep soon. The frogs are chugging and croaking in perfect chorus in the swamp out back and who can know what all goes on there? Wild bees and honeyed trees and roaming bears and hawks nesting and owls who sound more ape than aviary and the occasional coyote howling and foxes must run through the deepwoods trails and deer are bedded down safe in the ferns, I hope. Blackberries are fruiting and Beauty Berry is coming on and the oaks tower over all, draped in gray Spanish moss and this is where I live, this is my little place beneath the sky, and I'm glad.