The art opening was wonderful and it was so much fun to go out with Lily, just us grown-up ladies. Roger and his wife, Sammy, hadn't seen Lily since she was a little girl and neither one of them could get over the fact that she's grown up now, a mother herself. "I remember you when you were this big," they said, raising their hands to about three feet off the ground.
"That's all you're going to hear from old people," said Roger.
We also saw an old friend of mine, another extremely talented artist, who is just the most charming woman. Stuart Riordan. She wanted to paint me when I was pregnant with Lily and it never happened and tonight she asked Lily if she could paint her. I was thrilled for Lily and wish with all my heart she'd accept. What an honor that would be and wouldn't that be something? How I wish I had let her paint me all those years ago.
Golly.
Well, anyway.

After the opening we went out for Mexican dinner and that was nice, too. Our favorite part of the whole meal, though, was watching first a mother and then a father following their beautiful little sprite of a daughter walk around the restaurant. She made no noise or fuss, just happily wanted to walk on her tiny little feet in their tiny little pink shoes and every time she passed our table, Lily and I smiled. You can take the mama and the grandmama away from the babies but they'll find another one to admire.

So it was a good evening and now I'm home in Lloyd where it has rained and so it's cool and in fact, there is still a bit of dripping going on. I went and closed up my pretty hens and Elvis and told them good night and fed the cat.

But all of that is not really what I came here to write about.
Do you remember the episode with the dental assistant and Owen?
So many of you wrote comments about how appalled you were and I wrote and sent a letter to the dentist about it and how we felt about it and so forth and today, Lily and Jason got this in the mail: 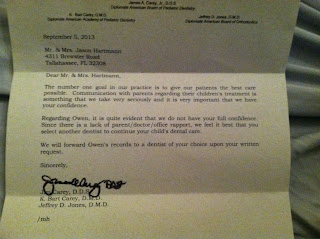 I never mentioned the name of the dentist or the office when I wrote about the whole deal here because, well...you know. Maybe it was an aberration.
I no longer feel any compunction to protect any identities. And honestly, why should I?
In a strange twist of fate, Lily and Jason had just gotten notice about a new family dental practice which will take their insurance plan so good timing.
It's just so fucking cocky of that office. Not even one attempt at talking or trying to work things out...just...YOU'RE FIRED! WE DON'T NEED YOUR BUSINESS! WE DON'T CARE WHAT YOU THINK ABOUT US! AND WE WILL EMOTIONALLY ABUSE ANY CHILD WE WANT! BUH-BYE!
Who runs a business this way? Seriously?
So if you or anyone you know in the Tallahassee area is wondering what pediatric dentist to take their child to, I would not recommend the office of Carey, Carey, and Jones.
Even though they do have that Keurig coffee maker in the waiting room which is pretty damn awesome.
Nah, they can take their K-cups and put 'em where the sun don't shine.

And that's about the most ballsy thing you'll ever hear from me here but I'm a tad bit upset. I mean, that was just rude. And callus. And unprofessional.
And not sweet.

I wonder how many damn boat payments for that dentist I made as a young mother, taking my own kids there.
Sigh...

Well, that's about it for me tonight. Time for bed. I really hope not to dream about dead people tonight. I'd much rather dream about the living, especially if they're sweet and loving.
Speaking of which, I spoke to Mr. Moon. They have not killed an alligator yet but they are seeing things like this. 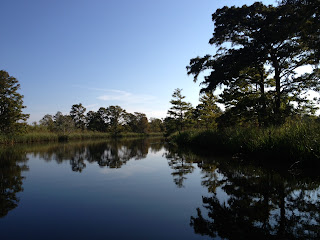 There. That's a nice image to leave us all with.