It's All A Process

I worked some more on the "memoir" today. Why do I feel the need to put it in quotation marks? Because I don't really believe in it, I suppose.
When did I quit believing in myself and my writing? Did I ever believe?
Yes. I did. For a brief, shining moment a decade or so ago, I did.

Well, maybe I can again.

Do any of you remember this? 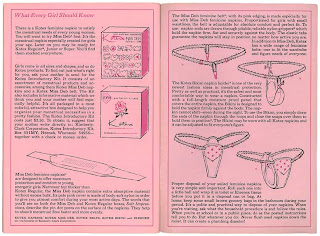 Oh god. It used to be so difficult and so shameful to be a girl. We used to agonize about our periods. When would we get them? What would it feel like? What if we started bleeding in the middle of class and had no napkin, no belt with us? Would the blood seep (or pour?) through our panties, our skirts? Everyone would know! Everyone would see!
The horror.
And I don't now about your mother but my mother and I both burned with shame when it came time to discuss periods and how to deal with them and how to wear the sanitary belt and how to properly dispose of the bloody pads so that hopefully, NO ONE WOULD KNOW I WAS ON MY PERIOD, which was fairly ridiculous, seeing as how my entire family shared one bathroom in those days.

So much shame in my life when I was young. Shame at being fat and then shame of bleeding and shame of boys looking at me and of course the shame of what my stepfather did to me and there may have been pamphlets about how to deal with Kotex but there certainly was no pamphlets on how to do deal with a molesting stepfather.

Perhaps it's not good to be bringing up these memories. It's stirring the pot and bringing up the scorch, the burned crud, to pollute the whole pot of stew. We all know that crud is down there and speaking for myself, I spent a good part of my life trying to pretend it wasn't and doing whatever I could not to disturb it but once I did disturb it, there was no turning back.
The problem seems to be though, that it is impossible to dump out the whole pot, scrub the bottom and start again, short of a lobotomy. The best you can do is it to learn to love the stew, even with the burned taste, not to torture this metaphor or anything.
But stirring it up again stirs it up again. That's just the plain truth of it.

So I don't know. I don't know if it's a good idea to revisit it all right now at my age.
But I seem to want to.

I seem to have a need, not to wallow in it or hurt myself with it, but to write about it. I think about people I have known who have suffered and do suffer horrible things and who deal with those things by staying constantly busy. These are the people who wouldn't even contemplate stirring that pot. Hell, they refuse to take the lid off the pot. These are the people who concern themselves very, very much with the world. The ones who seem to love being able to say, "I'm so busy I can't even think." Which I am sure is quite true and serves a purpose in their lives and it's valid as hell and those people get a hell of a lot done.
And I get that.
We all deal with things the way we deal with them.

Tomorrow I'm going to go to town and do something with Lily and the boys and maybe Hank if he can and maybe May if she can. Something. Anything. I need to leave this property, engage with others. Be mama, MerMer. I have a tendency which becomes stronger every year to stay right here, probably too much in my own head, but that's me. And I am not afraid of my thoughts. Well, not unless I am in the midst of anxiety which I am not at the moment. And I'm not sure that that isn't more chemical than anything I do or do not do. I could be wrong.

It just occurred to me that I had raced along with that memoir until I reached the point in it where my stepfather came into my life and then I slowed and then...I stopped.
Funny how I never, until right this second, really gave that a thought. I think of myself as being quite open about the abuse in my childhood. I have been to therapy, attended groups. I have discussed it and written about it and cried about it and screamed about it and have, I believe, come to some sort of peace with it.
Perhaps it's a lifetime process. Many things are.
And there are those who would probably love to tell me to just get over it already. I don't blame them!

I wish I could.

I wish all of us could.

I know I certainly did come to a point in my life where I not only accepted menstruation, but came to cherish it as part of the cycle of a my life. A woman's life. And when it left me, that time of bleeding, I grieved.
But that was a natural part of my life. And symbolic of my ability to create life which is pretty powerful.

Well, it's getting dark. I am not lonely. I have all of you! And rice boiling on the stove and I'm going to make one of the few dishes my mother used to make which were really good. A casserole of rice and spinach with eggs and cheese and milk. I make mine with brown rice and I slice tomatoes on the top before I bake it. I add a tiny bit of nutmeg to it. It is delicious and it reminds me that there were some things in my childhood which were nourishing and comforting.
And tonight I will remember that and perhaps some small balance will be restored in my own tiny universe.

Night, y'all.
Thanks for being here and keeping me company. I mean that with all of my heart.