Dealing With Anxiety Without Hard Drugs 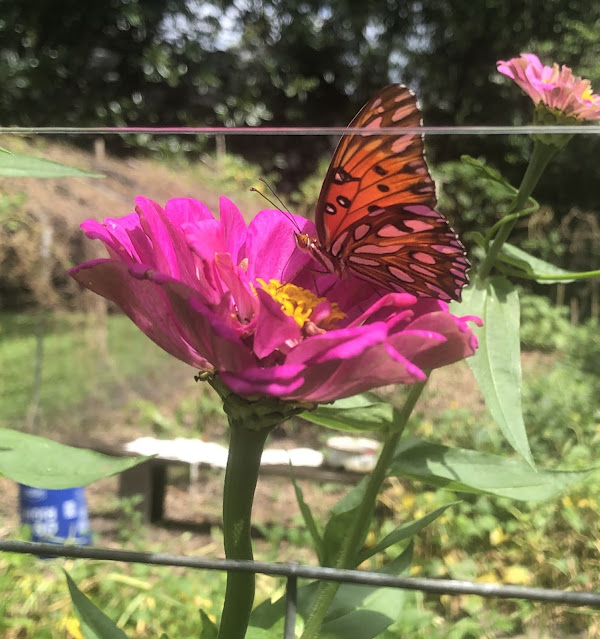 I think my mind had to take over today and I have been relatively panic-free, unlike yesterday and last night. I was quite literally making myself sick with gut pain and this morning I began to feel that way again and somehow I managed to mostly get past that although every time I think about the appointment I wince and then float over it but it's sort of like floating over a giant whale shark- you know it's there, underneath you but you just have to keep on swimming.

Or something like that.
But I did not just huddle in the bed. I got up, I picked okra and zinnias, I did laundry, I took the trash and went to the post office,  I started back in with the cleaning and decluttering. This time in the Glen Den. I speak often of the Glen Den and it is probably the room that sees the most use in this house. It is filled with Mr. Moon's...well... things. His chair is in there and the TV so yes, it is a den and I would almost call it a man cave except that it's got enough toys in it to satisfy a small class of preschoolers too. It's got deer heads and a few fish replicas and pictures that he likes and fishing lures and fishing awards and fishing magazines and hot rod magazines and Daisy BB guns and old Avon men's perfume containers (his mama sold Avon) and deer antlers and his mother's antique lamp and a rattlesnake skin and pocket knives and an Auburn pillow that his mother needlepointed and fancy whiskey decanters and lots of glasses that he collected from bars in Europe and a whole lot of other things. Including (and this I do not understand and I should ask him about it) an entire shelf of antique irons and a small ironing board.
No. He does not iron. I am certain that I knew at one point where these came from but have completely forgotten. 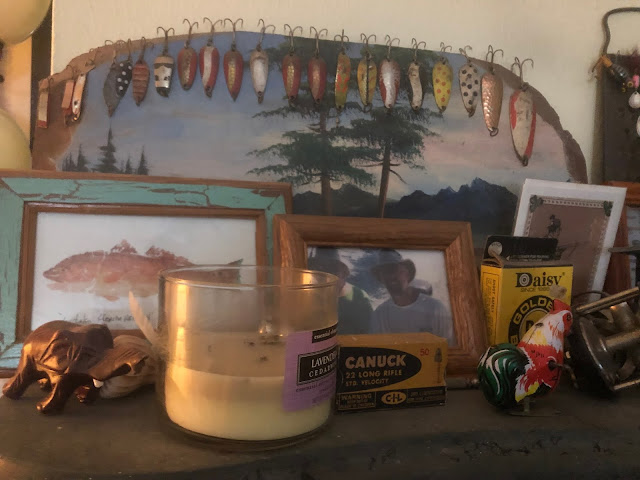 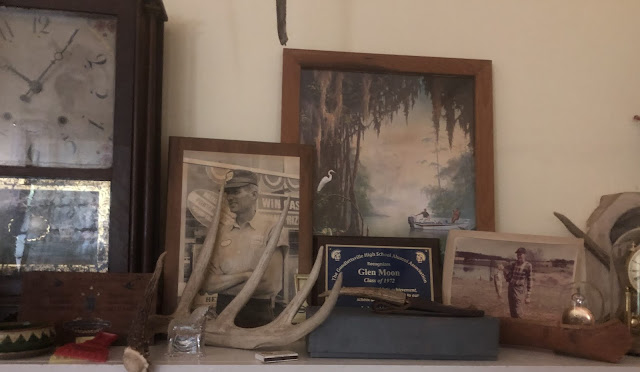 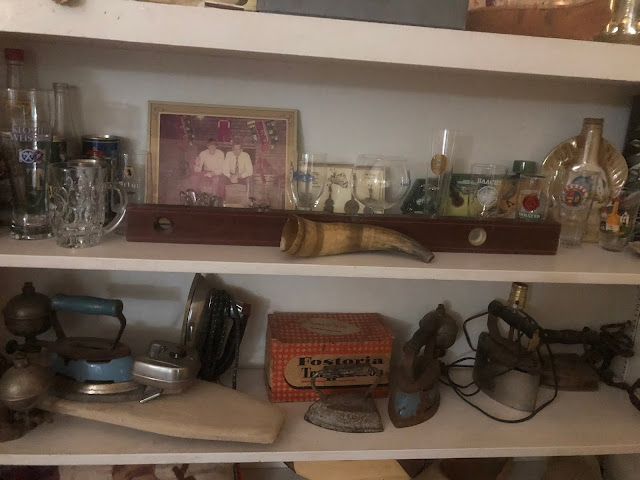 So. There is a lot to clean there although it is not within my rights to get rid of anything. I did, however, go through the few things of mine in there and the toys, and either tossed or put aside to give away two bags of that stuff. I do hand needlework and knitting and crocheting in there because, as I said the other day, there's a good light and an end table right beside the couch where I can sit and watch TV and do those things. So I organized my embroidery thread and yarns. So that all looks like this now. 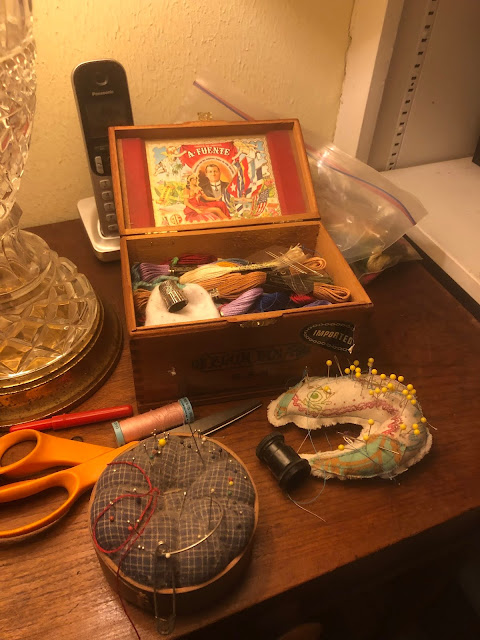 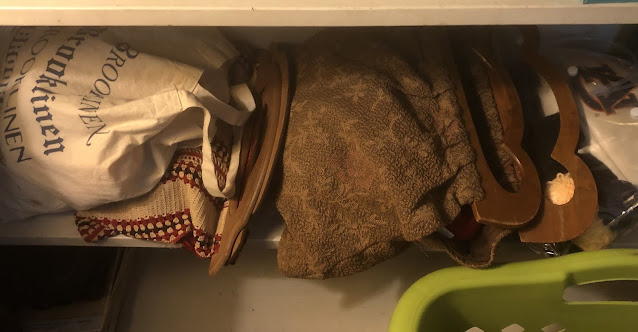 And it feels good to have accomplished that organization.
I asked Mr. Moon if he would take a quick glance at all of his things on the mantle and the shelves on  either side of the fireplace and see if there was anything he would mind letting go of. He did look. He said, "I see those three bags there that I never use."
Haha.
"You never use ANY of these things," I said.
He agreed this was true but said that he likes to look at them. I proffered that he might want to be the one to clean them and organize them. I admitted that I only do that maybe once a year but still...
He said he would.
And I took everything off the shelves and dusted or wiped them down with Fabuloso and white vinegar (the magical elixir) and put them all back and then I swept as well as I could, even pulling the couch out from against the wall. I found a thimble I'd been missing for a very long time.
I was going to mop but decided not to. Do I LOOK like Martha Stewart? Hell no. She looks great.
And so that was my day. I am glad that I filled two more bags of things to take out of this house even though once again, that doesn't begin to dent what needs to be done.
I will get through the next eighteen hours. All will be well and regular programming will resume.
That's the plan.
Love...Ms. Moon
Posted by Ms. Moon at 6:13 PM