Back In Baby's Arms (Soon, Anyway) 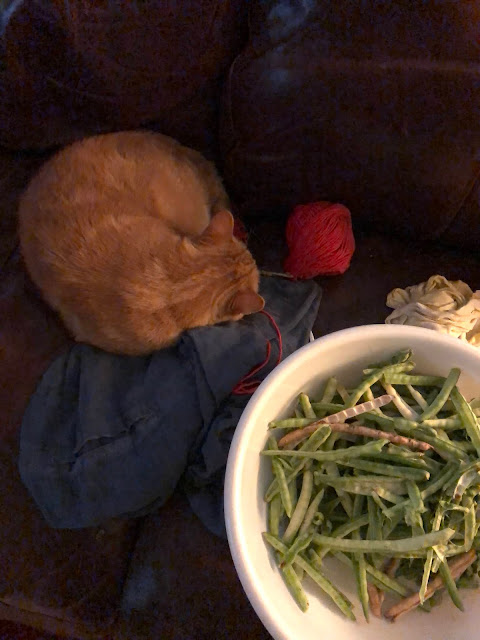 It's been a rainy day here in Lloyd. This is the dregs of Ida, I think, and how very lucky we've been that this is all we've had. Just slow and intermittent rain. Maurice and I decided to stay in and shell peas which is what we did. It would go a great deal faster if Maurice used one of her lethal claws on the peas to split them open so that I could shell them more easily but she isn't interested in helping.

I finished the documentary series on John of God. It did not have a happy ending. Well, except for John. After being arrested and put in prison and sentenced to over sixty years, he was released last year due to his age, which is 78, and covid. He is on house arrest with electronic monitoring. Supposedly the government had taken all of his millions (and his illegal guns and jewels and houses with hidden basements and safes) but it looked to me that he was still living far from the poverty line.
The women who brought charges against him were not well pleased.
As you can imagine.
And he still has faithful followers.

After that I decided to watch something a bit lighter and so I chose a Paul Rudd movie, "My Idiot Brother."
I highly recommend it for light entertainment. It's sort of silly but the cast is good and the acting didn't make me want to retch and the writing wasn't bad. Actually, for what it is, it's one of the best movies I've seen in a while. I can't tell you how many movies I start watching and after thirty or forty minutes I'm like, "Why did they make this movie?" and more importantly, "Why am I watching it?"
This is especially disappointing when the movie has what I would consider to be a very fine cast.
But, who am I to judge?
Not that that's ever stopped me before.

So that was my exciting day. I also took the trash and did some laundry so there you go. I talked to Mr. Moon this morning and again he asked if he could come home now.
I said, "I told you yesterday that you can!"
He said, "I just wanted to make sure you hadn't changed your mind."
I had not and have not changed my mind.

So he'll be getting in sometime around midnight, I think. I told him I could not promise to be awake but that I would be HERE. I wonder if the cats have missed him. Probably. Maurice generally sits on his lap every morning while he reads the news online. She's slept with me a few times. Okay. Now I can delete that photo from my phone.
I took it to send to my husband and I told him, "The Hellbitch is taking the first shift tonight."
She really is a mean thing. One night I went to sleep with Jack and I woke up in the middle of the night and reached down to stroke his head but realized that it was not him when I heard a very pissed off MRRWOWW!
Jack does not really speak at all but Maurice is not shy about speaking her truth and her truth generally is that if I touch her or move she'll try to kill me.
I really do not know why I tolerate that cat. And yet, I love her.
I thought I was going to get so much done while Mr. Moon was away. Not quite sure what I thought that was going to be but far more than what I did. What DID I do? One thing I did for sure was listen to a lot of hours of Mormon Stories podcast. They've had several interviews lately with people who either are gay or who have gay children who have left the church over the way it deals with LGBTQ issues.
Which is to say- hatefully.
Another reason to shun religion in my book. Thank god that when my kids came out to me I didn't have to worry that they wouldn't be with the rest of the family in the Celestial Kingdom when they died.
All right. That's enough blabbing.
By this time tomorrow I'll have my husband back.
I sure will be glad.
Love...Ms. Moon