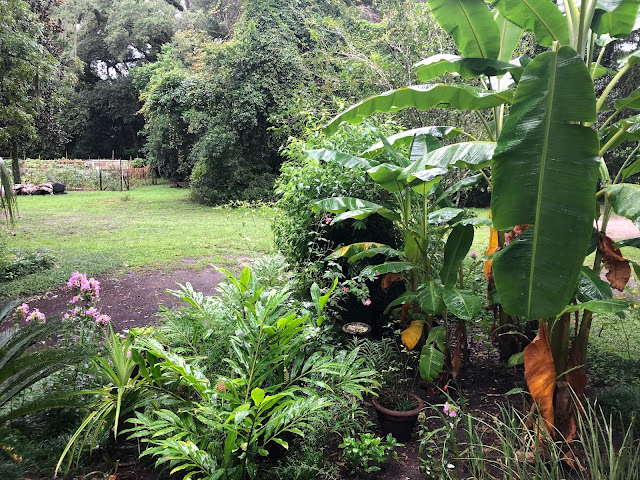 It has been a very, very quiet day here in Lloyd. Not much going on except for a constant drizzle which increases and decreases, a tiny bit of wind now and then, just bands from far-away Fred. We lucked out big time on this one.

But of course because there was going to be rain all day, Mr. Moon decided that this would be a fine day to drive down to Orlando to pick up his golf cart. You probably don't remember this story. Back when he was deep into the car biz and he got his cars at auction, he would drive down to Orlando weekly because they had the largest car auction in the S.E. It was a routine that we were quite used to. He would drive down there on Monday, go to the auction on Tuesday, and drive home that afternoon and evening. It was brutal. Orlando is hot as hell most of the time and if you've ever been to Disney World you can attest to that fact. The auction was huge, spread out over many acres, and finally he got a golf cart, as many dealers did, in order to get from one car to another before they went up in the lanes, to inspect them.
And then...the auctions started being streamed online which changed everything and then Covid happened and everything changed even more. On top of all of that, he's "semi-retired". Not just because he's so ready to do other things, but because the cars he likes to sell, which are low milage Toyotas and Hondas, etc., are just not available and when they are, the prices are outrageous. He's had to turn down old customers and it breaks his heart but that's just the way it is now.
BUT, all of this is to say that the last time he went to the auction he did not know it would be the last time he went to the auction and he left his golf cart there. A few months ago (or was it a year now?) he went down there to collect it but it had gone missing and then they found it a week or so later and so he's been anxious to bring it home and today was the day.
At first when he said he was leaving this morning, I was a bit perturbed. I mean- we had a possible tropical storm coming but we looked at the forecasts and it looked like driving down and back wouldn't be a problem and it didn't seem as if we'd get much here in the way of scary weather. So off he went after I made him some popcorn the way he likes it with butter and nutritional yeast and lots of salt, and packed him a sandwich and a couple of apples. This was what I used to do every Monday for so many years and we joked about it before he left. I even offered to make him the coffee drink I used to make him with a shot of espresso and half-and-half and some Hershey's syrup but he said that just a regular cup of coffee would do and he took that.

After he left I texted the kids to tell them that he was going to Orlando and they were all like, "Mama! There's a storm coming!" and I was like, "But, but, but..."
And then I got worried and I called him and he offered to come back but I said, "No, go on. I'll be okay," and of course I am. I doubt we've had a wind gust over fifteen mph.

And somehow this entire day has just slipped by like a dream. I made a pot of the black bean soup that we love so much and it's been simmering all afternoon. The chickens have spent a good part of the day sitting on the kitchen porch, talking amongst themselves and looking out at the rain. I did some ironing while watching all of the episodes of the latest season of Grace and Frankie which have been aired.
That would be four. Episodes.
I have a love/hate relationship with that show. Honestly, the acting can be horrific. The daughters of Grace, especially, are just so shallow and unreal. Maybe some of it is the writing. Of course all of it is saved by Lily Tomlin and Jane Fonda and although I've always been a fan of Lily's, I've never been quite sure about Jane but she has redeemed herself for me in this series. She says the word "fuck" as if she had been born with it on her lips and I do admire that. In fact, the liberal usage of that word is at least 20% of what I enjoy about the show. Of course both the ladies have obviously had work done but I have to say that for octogenarians, they look fabulous. There is a lot of make-up involved but surgery and make-up can only do so much. And I was surprised in this season to see that it's a thing that Grace (Jane) is letting her hair grow out to gray. Or, at least the wig she wears in the show is. And they discuss it! Good for them!
So that was that and I got quite a few shirts ironed and I've stirred the soup about a thousand times and done a little laundry and it's been a slow, lazy day. It's still raining and the frogs are croaking their little throats out and it's only about 81 degrees and thus, quite pleasant.

And Ta-Da! Mr. Moon just showed up. He is home safe and sound with a golf cart. The children will be thrilled to have another small vehicle here to be driven around in. On. Whatever. And speaking of children- the schools in our area were closed today because of the uncertainty of the storm and what its path and power might end up being. I hear that Gibson cried at the news. He loves his new teacher that much. Levon and August, however, were thrilled. I guess they wanted to stay home and play with their puppies.

I have not seen the little cat again although I may have heard her this morning. I am really hoping that she belongs across the street and just came over for a neighbor visit yesterday. Jack and Maurice continue to fight daily and I am afraid that thus it will ever be.

I am grateful for a storm that wasn't bad, a roof that doesn't leak, and a man who made it home safely.