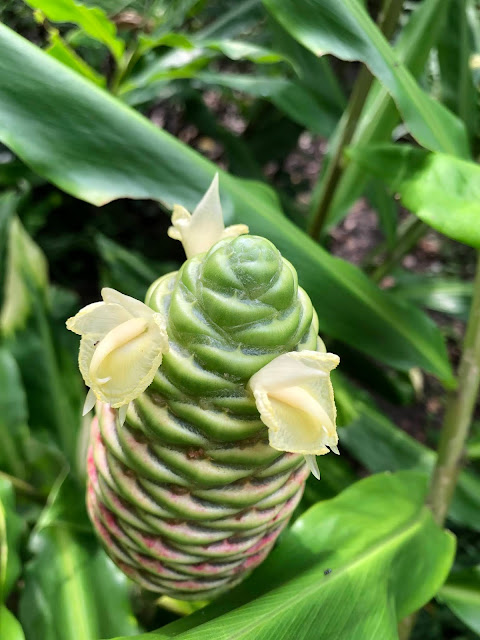 It is coming on deep summer here in Lloyd and the pine cone lilies have raised their cones up. The blooms on them are beginning, such fragile little cream-colored blossoms, and the cones themselves are beginning to deepen into red. In a few weeks, the hurricane lilies should be coming along, popping up out of seemingly nowhere but plain old ground, their stalks growing inches a day.

Dottie is sitting on two eggs now. Well, actually, the last time I checked on her, she was not sitting on them at all but on a completely different egg that had just been laid in another nest. I seriously doubt it was one of hers. I think that tomorrow I'll toss her other two eggs out as I know they cannot possibly have live chicks in them. Not in this heat. But perhaps I'll give her another day or two unless she truly shows no more interest in sitting on them. Poor little mama needs to learn to go broody earlier in the spring as her sister did. A lot of damn work for such a poor outcome.

I think Gibson had a pretty good time here last night. I felt bad because I did not have a great deal of energy to offer the sweet boy. I made the spaghetti and meat balls and the purple cow but when it came time to read his bedtime books, I only got through three of them and just could not face reading The Little Red Hen Makes A Pizza. This was a first for me. He understood and went right to sleep and this morning he said that he slept very, very well. He and his grandfather played a lot of Wii and they both enjoy that so perhaps it wasn't so bad for him. I took him home a little after noon and jetted down the road for a quick Costco catch-up where I got to see Brenda with the beautiful mermaid eyes. I was glad to see her as I haven't for awhile. She told me she'd been on vacation. I was going to run into Publix too but realized I was driving around without a license plate which does happen occasionally when your husband is a car dealer and switches plates on vehicles, sometimes forgetting to put one back. I am so paranoid about getting stopped by the police that I just came home after Costco and no, I did not get stopped. I always have the irrational fear that if a cop stopped me, he would somehow find a massive quantity of drugs that I knew nothing about somewhere in my car. This no doubt springs from the old, old hippie days when police loved to stop hippies and search their cars thoroughly and whoops! sometimes even planted drugs on them and actually, a police officer a few counties over was just taken to trial for doing exactly that, virtually ruining the lives of citizens who were suddenly in possession of illegal substances that they had never seen before in their lives.

But it was good to get home and just do a few chores around here. Friday, of course, is sheets-washing day and that has been accomplished. The porch plants are watered. The kitchen tidied and swept. It has rained and cooled off considerably and I've done the prep work for a skillet spanakopita and thawed out some snapper. The fish and the spanakopita and a few of the last small tomatoes will probably be our supper. I am catching my breath.

May has texted us that her mother-in-law has Covid, despite being fully vaccinated. Her symptoms so far are mild. I have a cousin with the same story. A local woman I know who was the principal of the high school that both May and Jessie went to has also gotten Covid, despite being vaccinated and she has bad asthma so she is not comfortable. Her daughter has it too. She thinks she got it, ironically, at a school board meeting about mandatory masking in the schools. Many there were unmasked, many probably unvaccinated, and social distancing was not observed. And the meeting went on for hours.

Both Lily and Jessie took their kids to school orientations today and Jessie said she got so upset that she couldn't fill out a form. Many of the teachers were not masked, nor were many of the parents. I think that she may choose to homeschool her boys for at least the first part of the school year to see how it goes. Lily is at her wits' end, knowing that she cannot keep her children home for another school year and yet being scared to send them to school. I feel so deeply for both of them. August and Levon need to have the experience of a classroom and to learn to function in the society of that arena. And yet- Jessie is on medication for her autoimmune disorders. So do Glen and I need to start masking again around the ones who do go to school? Obviously, our glorious moment in the sun of feeling protected and safe is over. I bought a box of disposable masks at Costco today and I am going to either order or make more masks for us to wear. There is no way we are going anywhere maskless now with the horrible rate of infection around here. It's the worst it's been since the whole thing started.

It's overwhelming again. And the tendrils of how all of this affects all of us is monumental. Michael, May's husband, was planning to travel to see his uncle who is in the late stages of cancer but those plans are now off the table. The hospitals here have canceled all elective surgery again. They are using classrooms as patient rooms. There is not enough staff. They are begging people to get vaccinated. Younger adults and children are the ones getting sickest now.

Well. Time for a martini.

When I went out to water the porch plants I found this little beauty. 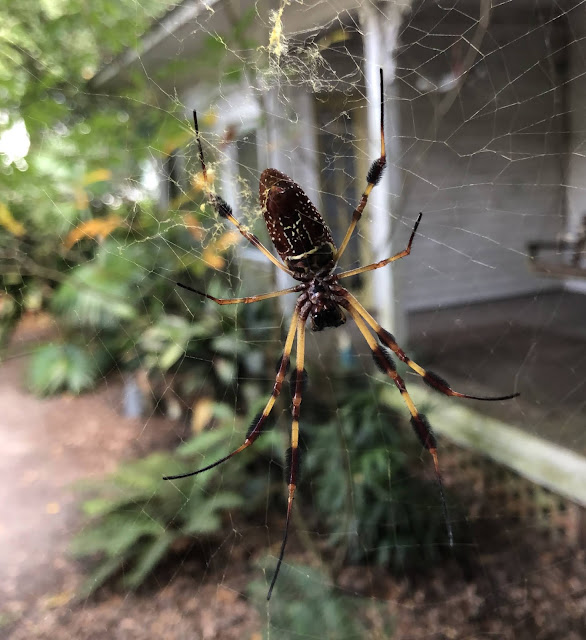 The golden orb weavers are another sign of deep summer here. They are everywhere, doing their annual dance of web-spinning, courtship, and egg laying. They will be here for a few months until it begins to turn cool at which point they will die, leaving their eggs wrapped in silk purses for summer hatching.

It is somehow comforting to know that some things are proceeding as they always have, even if the rest of the world is in turmoil and fear and confusion. The lady spiders know what they are doing and they are living their lives and although I certainly do not care to have one crawling on me (and this has never happened), their presence is a sort of comforting magic to me. 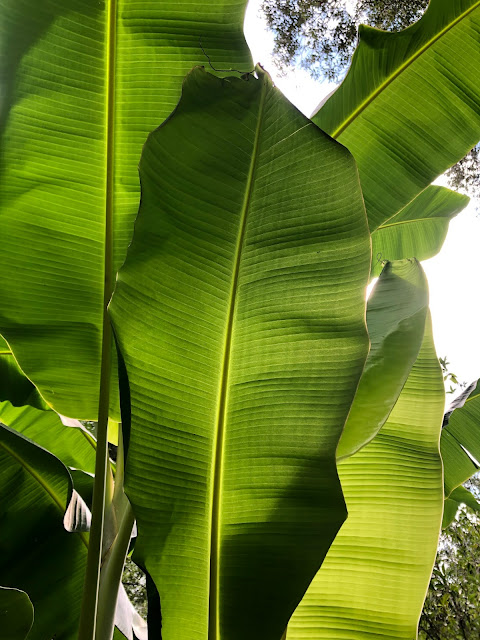