I listened to all of you yesterday who wrote to reassure me that throwing away my grandfather's books was not a sin or even slightly wrong. And I did it. I took them all out of the bookshelves today and bagged them up and drove them to the dump depot and hauled and hefted them in with the rest of the trash.
It feels a little disrespectful, a little wrong, but I know it is not.
Last night when I took one of those books out and set it on my table here on the porch, the fan literally blew pieces of the cover off of it. And all of them were in that condition.

I also threw the crayons away and some other stuff too. I've got another bag filling up to take somewhere to donate and I've texted my kids that I would really like for them all to come out to go through some things to see if they would like them.
Pictures, mainly, I guess, but objects and items, too.

I opened the trunk in the dining room today and I think I must have unconsciously remembered what was in it although when I opened it, I was surprised to see what I'd stashed in there and was not well pleased. 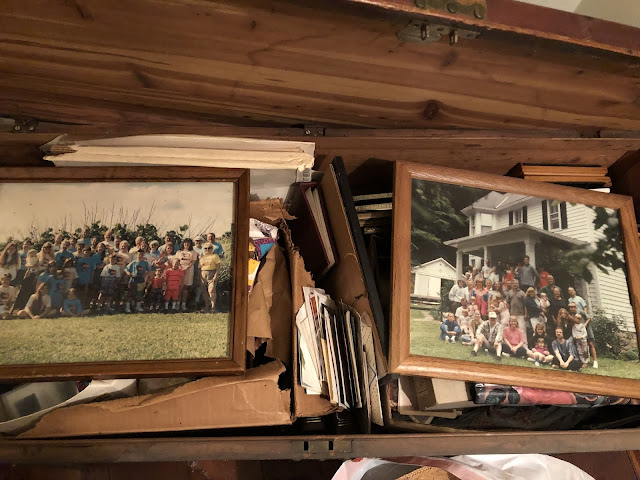 Pictures, pictures, pictures.
And a few file folders holding things that probably belonged to my mother. I did not investigate that deeply. I picked up a few of the pictures and went through that stack there in the middle and then set them back down and closed the lid again.
School pictures going back to my kids' preschools, family reunion pictures taken by my photographer cousin who died at a tragically young age, pictures of Glen's family. Pictures of babies and parents and cousins and friends and pictures of people who were living and smiling and happy then but who are now gone.
I've never been a good archivist of photographs. I don't know what to do with them any more than I know what to do with the emotions they wreak in me.
I know that somewhere in this house there is a bag of family photos that belonged to my mother and I can remember going through them and throwing out each one that had an image of my stepfather in it. I know I wrote about this before. Every damn picture shouts of pain and unhappiness to me, even the ones that did not have him in them. He was there, whether corporally or not. His presence in our life was a constant and dark threat. I never remember him laughing, even once.
I've asked my brothers if they want those pictures.
No. They do not.
I'll offer them to my kids. Perhaps they want one or two but I can't see why they would.
And yet, it seems so cruel to just toss a family's history into a bin, even if they are the saddest things in the world.
But I think that's where they'll end up. My children carry my genes, both the good ones and the bad, and so do my grandchildren. That's enough, I think.
That's more than enough.
In other news, Jessie brought the boys out today for a little visit. They ended up staying for awhile so that Jessie could go shop. She and Vergil, after much, much debate and discussion, have decided to send the boys to school. Leon County has gone against the Governor's mandate and is requiring children and teachers and staff to wear masks, at least until the end of August. And although Jessie and Vergil know that everything which is possible to do to keep the children safe is being done, it is still a horrible decision to have to make. But I think that they truly know that the boys need to be with other children. They need the socialization, they need to get to know children who do not look like them, they need to begin to learn the lessons- not of the alphabet and numbers so much as the lessons of life that we only learn when we are part of a larger whole.
Same for Owen and Gibson and Maggie.
And so August and Maggie will begin kindergarten which is a magical year where you learn to get in line and to raise your hand when you want to speak, to be responsible for when you need to go to the bathroom rather than having a mama to remind you it may be time, to sit at a table and eat with others, to share, to make friends, to listen, to learn to learn.
So today was rather special as August and Levon ate in my kitchen and we read a book and played a game and they watched TV. I told them that I was going to miss these week day adventures with them.
And I will. But they are so very excited.
Levon is only going to preschool for a few hours three days a week so he'll still be a part of my life on week days but it's all going to be different. 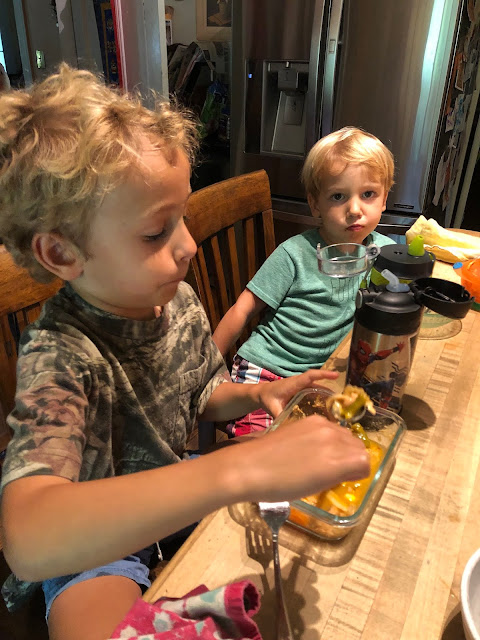 What I'm feeling cannot compare to what Lily and Jessie are feeling as they send their babies off to school, but it still feels big.
And way too soon. I remember the piercing of my heart when Hank and May started school as if it were (cliche alert!) yesterday.
Well, this is life. Perhaps part of the reason we are such collectors of things and takers of pictures is an attempt to try and slow down the supersonic speed of it all. If so, it doesn't work, does it?
Here we are, hurtling through space and time, as insignificant and as important as anything in the universe could possibly be. And trust me- the universe does not care.
But we do.
We can't help it. We are humans.
Love...Ms. Moon