I Think I May Need Help

I woke up this morning swamped with stomach-cramping anxiety. It directly relates to my coming-up doctor's appointment and I'll try not to talk about this too much but just as it twists my guts, it spills out of my fingers as I type.

So I figured that all things considered, it would behoove me to take a walk. I have not walked in weeks. Weeks and weeks. This is not like me. I've had so many excuses. Rain was a good one for awhile. Being in North Carolina was also a fine excuse- if you think I'm going to walk up and down those hills you are wrong, wrong, wrong. The heat has been more than an excuse- it's been a valid concern. It has been torturous lately and it was this morning too but I am quite aware that I can walk a few miles without dying and so I put my shoes on and I did just that.

I took no pictures because everything just looks hot. If heat can be seen with the naked eye, then that is what I was seeing. Nothing but hot trees and hot grass and hot weeds and hot houses and hot sky and hot road and hot sidewalk. When I finished walking and turned into my shady driveway I was a red-hot mama.
Literally.

I knew I needed to go to Publix today because I didn't go last week when I discovered I was driving around without a license plate but I could NOT get motivated. I decided to start in with the clearing/cleaning of the dining room. It's not a huge room but it's big enough to hold a whole lot of crap.
Which it does.
Tchotchkes from beach wanderings and Big Lots. Sewing crap. An antique suitcase which had once held hats in a rather charming way was now filled with hats of all descriptions including gimme caps from everywhere we've probably ever been. Also sun hats. Also straw hats. Also beach hats. Hats I have not worn in years. Hats I will never wear. The suitcase sits on an old chest which I have not opened in years. I still haven't because I haven't gotten that far yet. Basically, I walked around the room and put stuff I knew I didn't want in a bag and then started pulling hats out of the suitcase and trying them on and I also washed a beautiful old silk scarf that Kathleen had given me that had been draped so artfully on the back of the suitcase. A collection of coloring books and activity books, crayons and markers and paper have also been collecting on that trunk for a good long while. I need to go through all of those. I am so tempted to throw out the giant tin of crayons and replace them with one new box of the things. The crayons are so old that half of them won't even transmit color anymore.
Let it go, let it go, let it GO!
Those things are there because the dining room table is where the children use the coloring and activity books and draw pictures. Which makes sense but it's still so much clutter.
Behind the trunk, which has been sitting catty-cornered in a corner (duh) I'd stashed some paintings that a family member (long dead now) did, which my mother had owned. I have absolutely NO attachment to these pictures except for the fact that someone I am sort of related to did them. They are not bad but they are also not that great.
They are now in the trunk of my car.

Here's another thing in that room that I have been thinking about letting go. My grandfather had a collection of The Harvard Classics, a set of books that I seriously doubt anyone ever read in entirety but of which it was said that if someone did, it would be the equivalent of a college education.
In 1937 or something.
And I have been in possession of these books almost my entire adult life. In Florida. In an old bookcase with glass-fronted shelves which sort of work and sort of don't when it comes to opening them. The books were bound in either leather or fake-leather and they crumble when you handle them. I feel certain that they are essentially worthless and I feel certain that no one on earth is ever going to read them ALTHOUGH if the apocalypse happened and we had no access to the internet or libraries, I would be the happiest woman in the world to have them.
That is not a good reason to hold on to something.
But, but, but...they are the great works!
And can't you just see me sitting in my crumbling house, wearing my crumpled crinolines, eating my crumbs of food, reading my crumbling books by the light of candles I've made myself with all the crumbles of crayons that I also saved?

I guess it could happen.

But you can understand my dilemma here- do I get rid of this five-foot shelf of books that make me feel vaguely guilty and queasy every time I pass it because I've never read so much as one volume or do I keep them because they are books- which are sacred- and which are made double sacred because they were my granddaddy's books?

And so no, I have not finished in the dining room although I did ask Mr. Moon this morning if he knew how to sell things on FB Market Place and he said he did so perhaps that is an answer. Maybe someone out there would love this set of books and the bookcase too. 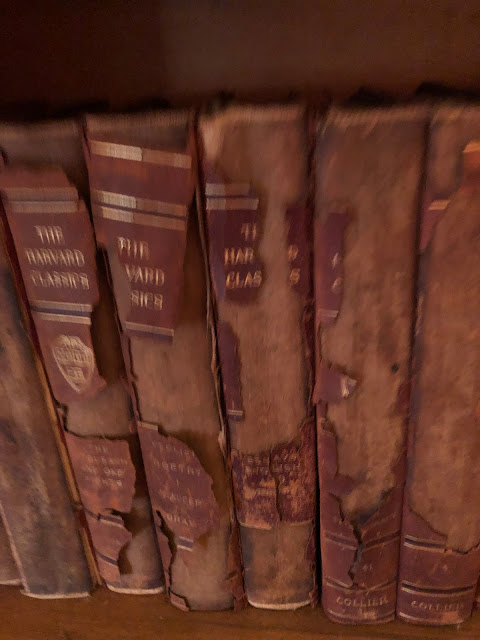 Yes. The picture is blurry but there's no light in the depths of that bookcase and you get the idea of what I'm dealing with here.
All right. That's enough of Ms. Moon's ponderings and dilemmas of the day. I did go to Publix. I will work on the dining room again tomorrow.
Lord, I wish I could go back in time and have a stern talk with my younger self about what is and what is not worth keeping.
On a completely unrelated note I threw both of Dottie's eggs into the woods today. Trust me. There were no chicks in them. Perhaps now she will rejoin the flock. I hope so. Her comb and wattle are almost blue instead of the scarlet they should be.
Sigh.
Love...Ms. Moon