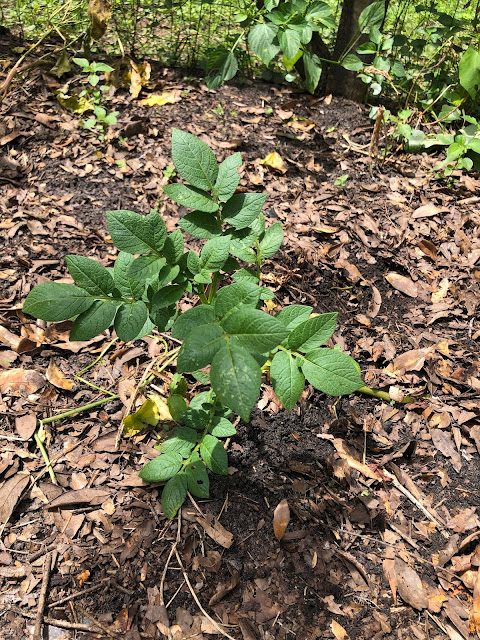 Well, here's the most interesting picture I took today.
I know- right?
It's a potato volunteer that has obviously sprouted from a spud that got left behind when Mr. Moon dug up the crop last spring. I think it was spring. I don't know. Things seem to happen so fast these days that I can't possibly keep up with them. I was looking at the confederate rose the other day thinking, "Well, that'll be blooming again soon," and then I thought, "But wait. Didn't it just bloom?"
Both things are true.

So yes, I did get back in the garden and do some more clearing out. Such a tiny bit at a time I'm doing. I texted my husband that the thing that drives me crazy is that I know when he gets home he'll go to work out there and have the whole thing done in a few hours. He will, too. But I pulled some more beans and the morning glory vines and tried not to pull the sweet potato vines, also volunteers. They all get so tangled together. I have uprooted more zinnias than I care to admit while pulling the vines around them.

I picked another couple of pounds of beans that need shelling and after I took my shower I sat on the couch and got to work on that. I've been watching a documentary series on Netflix called "John of God: The Crimes of a Spiritual Healer." It's about a Brazilian medium who was supposedly able to call forth an "entity" who could heal people of everything from brain tumors to breast cancer to epilepsy to mental illness. The entity changed at times. There were more than one. He did "spiritual surgery" on people using unsterilized medical instruments and laid hands upon them.
You know, the usual.
At one time the number of visitors to his facility was counted in the hundreds a day and the business they brought to the little town he was in was phenomenal. All of those people seeking his help had to sleep somewhere, eat somewhere, get taxis, etc. Goodness gracious! Even Oprah went to see him twice! The spirit was so strong there, she claimed, that she had to sit down or would have passed out.
You can only imagine how THAT affected his business.
Well, of course it was all a scam and not only did he make millions off the faux medications he was selling, the kickbacks he was getting from local businesses, and who knows what else, he was also (I know you'll be so shocked to hear this) molesting women.
Hundreds have come forward to report him.
He'd take the ones he fancied into his "meditation room" and according to what I'm seeing he used a similar line on almost all of them. He'd tell them that they, the women, were very powerful mediums too and that he desperately needed their healing.
Why is that these guys all need healing via their penises?
In Brazil it is not uncommon to find these spiritual healers who seemingly yank bloody tumors out of people without the benefit of anesthesia, who scrape people's eyeballs, who can do heart surgery on them in a matter of minutes. It's sort of a traditional thing. Actual medical care is scarce and people are poor. But this John of God attracted believers from all over the world. (Thanks, Oprah!)
He told women that the lives of their mothers, their children, depended on them going along with his own need for healing. And so many believed him. And why wouldn't they? If they were there in the first place, they must have had at least some belief in the fact that he was a very special human invested with holy powers.
This is probably one of the oldest cons in the world. The use of belief/religion/call-it-whatever-you-want, to attain money and to have sex with people they normally would never be able to.
Gurus, priests, preachers, bishops, famous yoga teachers.
It never ends.
It's one more thing about religion that I abhor. And when I say "religion" I mean everything from Catholicism to Buddhism to Mormonism to Scientology. You get some man (it's not always a man but absolutely mostly) who rises high in the organization or is even the founding person of the religion who is charismatic and finds himself in a place of spiritual power over people and you'll find some man who's using that power to sexually molest people.
NOT ALWAYS, OKAY?
But far more often than it should.

In the episode I was watching today, John of God's daughter was brought on. She didn't even know who her father was until she was nine at which point he showed up in her life and wanted to take her away from her mother and stepmother, which they allowed, and I was thinking, "This ain't gonna be good," and yeah. He molested her too.
Not only was he a famous healer, he was her father. And if there is an original powerful person in a child's life, it's her father.

You think it's a coincidence that so many religion's gods are referred to as Father? Or that the priests or heads of the religion are called Father?
Our father, who are in heaven.
Hey, Steve, Father Francis wants to see you in his office.
Patriarchy, patriarchy, patriarchy.

People may wonder why I, as a survivor of sexual abuse, even watch these kinds of documentaries. Well I'll tell you one of the main reasons- it's because every child who was abused, and many adults who were abused always have a secret fear and carry shame that they were the ones at fault. That they did something wrong to cause the molestation, the rape, the abuse. And watching or reading about abuse helps to strengthen our knowledge (speaking for myself here) that no. It was not our fault.
It was not my fault.
I did nothing but offer love. The love of a child for a father figure.
Which I so desperately wanted.
Those women whom this Brazilian almost-saint molested were only seeking healing for themselves or a loved one. And yes- perhaps a special moment with the holy one. They were desperate. They believed him. Lives depended on that belief.

So I guess that's all I have to say about that right now. Actually, I have a lot more I could say but I have other things to do and so do you, I feel quite certain.

Meanwhile, here in Lloyd, I am truly and really fine but I sure am happy that my good man will be home tomorrow night. He called me today and said, "Can I come home now?"
"Yes, please," I said.
There are good men. I promise you. That's taken me a lifetime to learn but I do believe it now.