The Sweetness of Long-Time Love 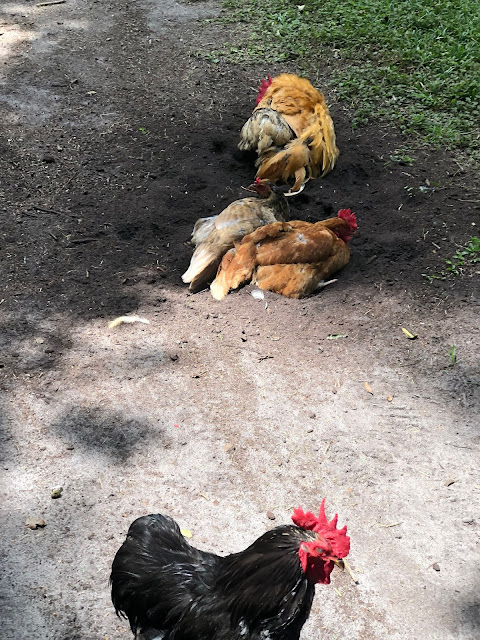 This is a picture of two hens and Liberace taking a dirt bath in the driveway with Fancy Pants looking on. Chickens love dirt baths and they get all down in that dirt, sifting and filtering it through their feathers. They look so funny when they do it, flattening their bodies into the soil, but it is one of their main pleasures. I wish I could say that Liberace had tasked Fancy Pants to take over the watch and keep an eye out while he was having a bit of a nap, but I am certain that did not happen. I do think, however, that Mr. Pants would alert the others if something did threaten them simply because he is a rooster and that's what roosters do.
Roosters watch and protect the flock. They also fuck the flock. Or at least the female part of it.
And speaking of which- it's just about time for us to do something about all the roosters that Darla hatched and when I say do something I feel certain that you are aware that I don't mean giving them a Bar Mitzvah because they are becoming men.
Sigh.
I still have not yet determined exactly which are males but that may just be because they all are and I don't have anything to compare them with. Some of them are practicing their crowing and getting pretty good at it but I haven't caught any of them directly in the act.
Poor Darla. All that work.

Well, it's hot here in the Land of Lloyd. The kind of hot where if I go out to clean the hen house, I am sweating through my clothes in the fifteen minutes it takes me. I did clean out the hen house and I also hung sheets and another load of clothes on the line and I picked some okra and at that point I swore I wasn't going back out until it was time to get the laundry off the line.
I was still feeling a bit funky this morning and I'm guessing it was because of the pneumonia vaccine and because of that I felt justified in taking it easy today. Which I mostly did.

All right- here's a scene from a marriage:

I hung the first load of laundry out while Mr. Moon was down the street, talking to his friend Rob about going out on Lake Miccosukee tonight to do further investigation on the alligator situation in preparation for the season opening on Sunday. The "season" meaning alligator hunting season.
Please. Don't ask me.
Why anyone would want to go out on a boat to hunt alligators at night (which is what they do) is so far beyond my ken that I wonder if my husband and I even live in the same universe. However, it would appear that we do and it would also appear that he did not notice that I had hung our sheets on the line when he got back and he got on the lawn mower and began to mow the lawn. Mowing the lawn always causes dust to fly and flying dust is not a good thing for clean laundry hanging on a line. I was mystified as to why he'd done that. However, I proceeded to hang a second load of laundry out and he proceeded to continue mowing.
A little while later he came in the house and said that he wouldn't mow right beside the clothes. I told him that even if he didn't mow right beside the clothes, the dust was going to get to them anyway. He asked me why I had hung clothes while he was mowing. I told him that I'd hung the first load before he started mowing.
"Oh," he said. He had not noticed.
I got a bit snippy about it. I read about the possible side-effects of the pneumonia vaccine last night and one of them, (and I am not making this up) was "irritability."
I wish I could claim that my snippiness was due to a vaccine reaction but I feel certain it was not. More likely it was the result of the heat and the fact that he had not noticed SHEETS HANGING ON THE LINE.
He apologized. I said, "That's okay. I'll just go get everything off the line and finish it off in the dryer." To be completely honest, I am sure that he could tell from my tone of voice that I was not very happy about this.
He said, "No, no. I'll just stop mowing."
I said, "I have to go get them at some point. Might as well do it now."
And I did. I probably even flounced out to do it or at least as much as one can flounce wearing overalls.

I think that things like this happen in all relationships. And it's so easy, whether because of simmering feelings being triggered or unreasonable heat or vaccine side-effects to let things escalate but I think as we get older and more seasoned in learning how to be a partner, we learn to step back and just...let...it...go.

Later, my husband thanked me for not getting too mad at him. I appreciated that.

If there is one thing that I do appreciate about getting older, it is that we have learned to love better. Or at least I have. He's always been the sane one, the one least apt to turn little things into big things. Over the years we have learned exactly how precious a good marriage is. How very unimportant it is to win an argument, to make the scoring point, to come out "ahead." How silly it is so very often to even have an argument about something completely ridiculous. How sweet it is to hear an apology, to give an apology, to kiss without having to make up, but simply to reaffirm "I love you."

And that's what I'm thinking about tonight. It's Friday. The man is off on a boat on Lake Miccosukee looking for alligators, I'm having a solo martini, there are line-dried AND dryer-dried sheets on the bed, the chickens have fresh straw in their nests, and there's a new Mormon Stories podcast for me to listen to.