So after writing so blithely last Sunday about how that particular day of the week no longer has the power over me that it used to, I woke up today to find that I was in the depths of Sunday despair.
I just felt hopeless. And helpless.
Ah well.
Isn't it funny, though, how some days almost everything is wiped of all joy and color? How things that normally wouldn't register as sad or difficult, as filled with dread portent just do? What usually seems fine or even cheerful can appear annoying or worrying and even the smallest negative events can feel overwhelming.
Like that. And its been gray all day long with only a drop of rain here and there. The entire atmosphere feels full of heaviness and I guess in a way it is. I don't think that either Fred or Grace are going to affect us very much but somehow their very presence, however distant it may be, seems palpable.

When I went to let the chickens out this morning this little cat was outside, as if waiting for me. 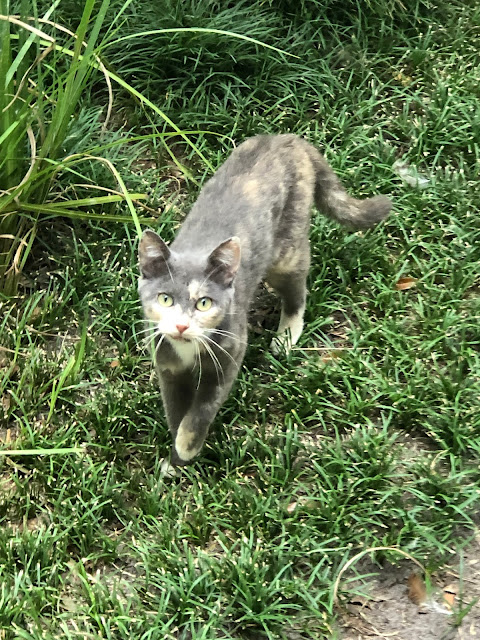 "What are you doing here?" I asked and the wee one stood its ground and listened to me. It followed me at a distance as I let out the chickens. While doing that chore, I discovered that there were very large weevils in the chicken scratch bag which, thankfully, was almost empty. Now chickens love weevils as much as they love corn scratch so I just dumped the rest of the bag for them to gobble up but it really bothered me for whatever reason. (Sunday despair.) Also, some of the weevils fell down into the garbage can we use to hold the scratch bags in and I couldn't lift the new, unopened bag out to rid the can of the bugs. This too depressed me. I used to be able to lift those things. I probably could have today if my life had depended on it but it didn't.
The little cat talked to me some and then it ran away and I went in to tell Mr. Moon about it and about the weevils and I sent my kids a picture of the cat and before I knew it, they were all excited and suggesting names. The very idea of one more creature around here for me to take care of holds absolutely NO appeal to me at all and besides that, Jack and Maurice already wake us up almost every night fighting and the thought of throwing that poor little thing into the mix is just a big fat FUCK THAT!
Jessie did finally suggest that it might be the pet of the woman who has moved in across the street. She said she did see a cat on the porch there the other day. I hope so. It hasn't been hanging around this afternoon as far as I've seen.
And then before I'd even started breakfast, the power went out and Duke Energy informed me that it would probably be on by 12:30 and then a little while later they changed that estimate to 1:45 and as soon as I got that text, the power came back on.
Thank goodness. I guess a tree fell. We heard a lot of chain sawing.
I got the apple mush out of the refrigerator and ran it through the food processor in batches and cooked all of that down with sugar and cinnamon and nutmeg and ground cloves. For hours. I sterilized my jars and finally about 3:30 this afternoon I had six lovely pints of apple butter. 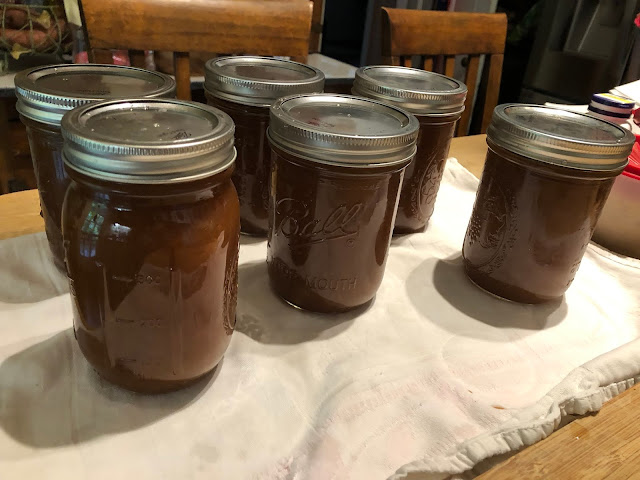 Very tasty apple butter, I might add.
And usually this would at least give me a sense of accomplishment but today it was just a big ol' meh.
And so it goes, as dear Kurt Vonnegut always said, and so it is. Tomorrow they are supposed to come out and hook up the generator to the electricity which means that for a good part of the day, we will have no power. I have no idea what I'll do. Sit and listen to an audio book and make pot holders, perhaps. In the heat. In the dark. It may rain all day tomorrow in which case the project will probably be delayed to another day. I know that I should be thankful that at least the Taliban isn't taking over our country but honestly, all that news does is to make me even more depressed. There's not a damn thing in the world I can do about that just as there's not a damn thing in the world I can do about maskholes and vaxxholes except wail, gnash my teeth, and rend my clothing. I am not making light about any of this. It's just the truth.
Okay. Here's a cheerful note.
Jessie and Vergil are fostering another dog. Actually, they are fostering THREE dogs. Three six-week old pups, American Staffordshire mixes, which is what the humane society calls bull dogs here because bull dogs have such a bad rep. And they are about the cutest things in the world. 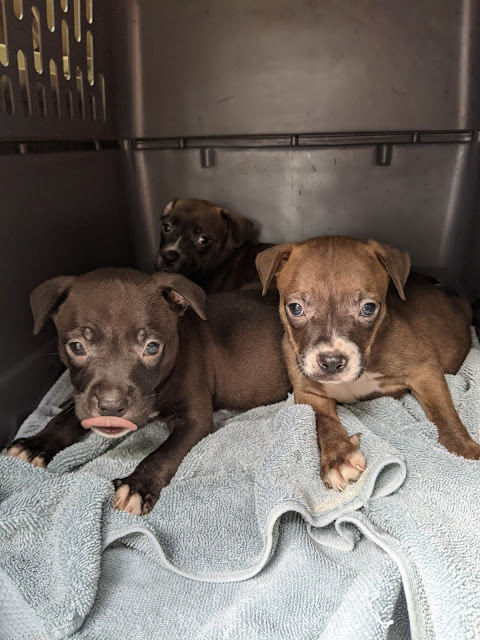 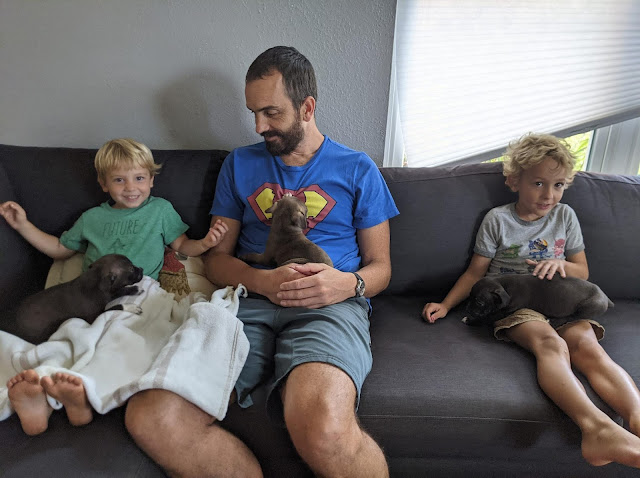 Of course all I can think about is all the pees and poops she's going to be cleaning up but at least they'll be little pees and poops. For now. And the boys appear to be in love.
Anyone want to adopt a very cute doggo?
I surely don't.
But I can certainly understand why someone else would. I'm just a grumpy old selfish woman who will probably cheer up quite a bit after my Thursday doctor's appointment.
Unless he tells me I'm dying.
Love...Ms. Moon