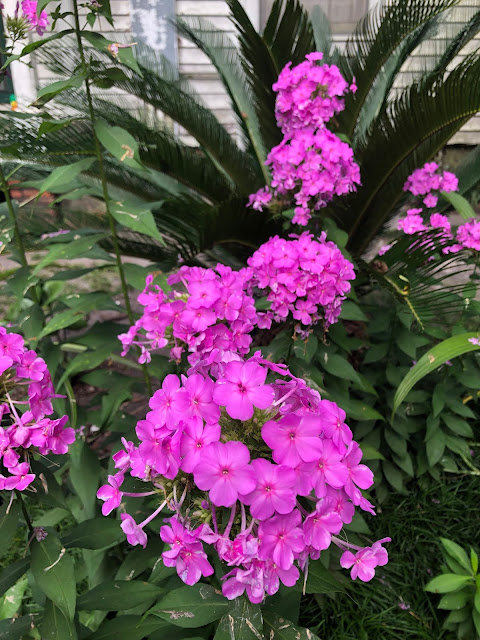 This morning I cleaned my industrial strength porch fan. It was absolutely choked with black, oily, dirty, Lloyd dust, cat hair and a few chicken feathers. Which honestly, I had not even noticed until Lis was here and I borrowed her eyes for a second and was horrified. Fan cleaning is extremely gratifying for me. You can actually see the difference in the before and after and have a nice pile of nastiness to throw out the door, not to mention how much better the fan's performance is afterwards.

Two little boys came over with their mama who left them here so that she could go grocery shopping and try to create the smallest semblance of order in the process of being home, moving everything back from the RV to the house, and so forth. That is an overwhelming task and I was so happy to have the boys here for awhile so she could concentrate. We ate a lunch and Jessie got some of last night's gumbo which was a pretty fine gumbo as well as a slice of sourdough which was one of the best loaves I've ever made. She finally got on her way and I texted Lily that she should bring Magnolia over because she's been dying to see August and Levon. She cried and cried on Saturday because she had thought that when she woke up on Sunday morning, she would see them immediately.

And so Lily brought Maggie and the big boys visited for a few minutes. 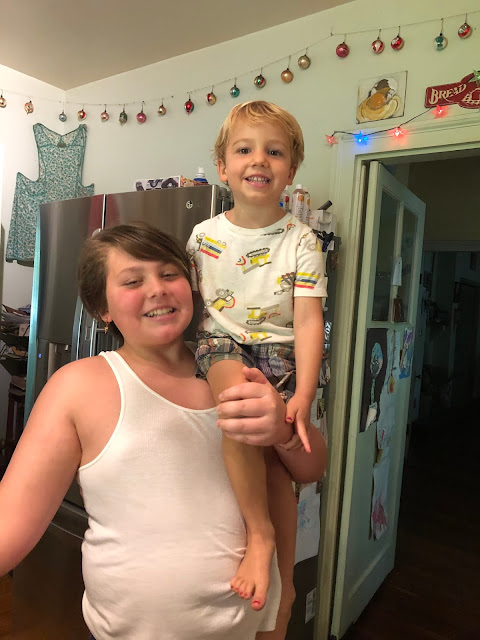 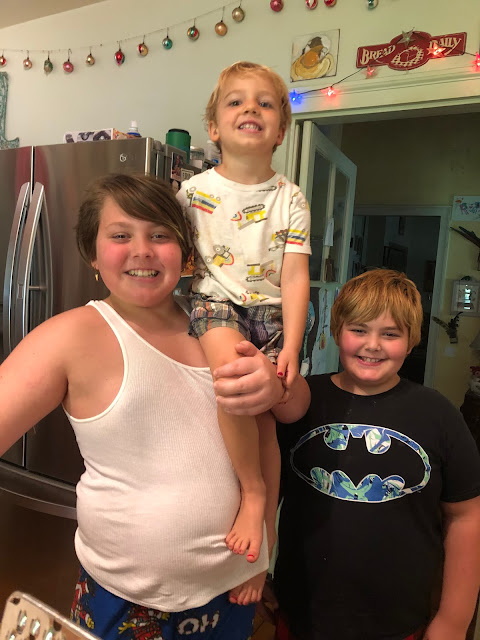 The three littles wanted Lily to set up the tipi in the library which she did and then they said, "Go away now," and next thing I knew, this was happening. 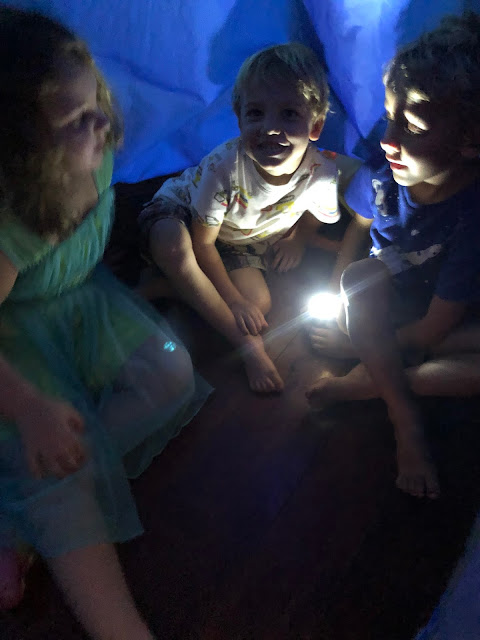 Those three played and played. They barely needed us at all. At one point I told them that if they got tired of what they were doing, we could read books or do a puzzle.
"You always say that," said August.
He is not wrong. We did read a few books but mostly only Levon wanted to listen. And we got out a puzzle and started sorting pieces but that didn't last long either. There was just too much to do. 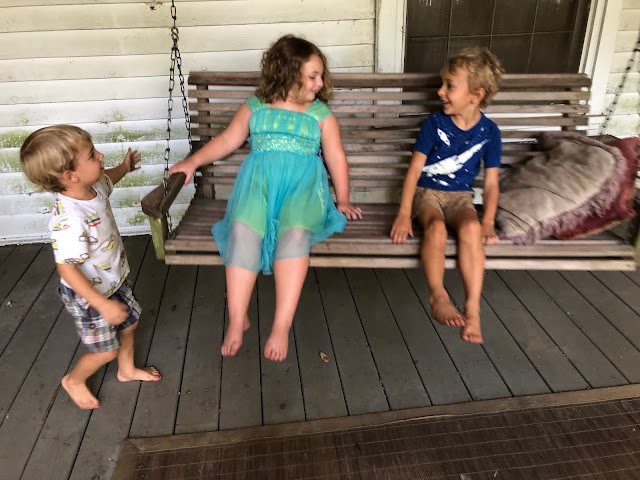 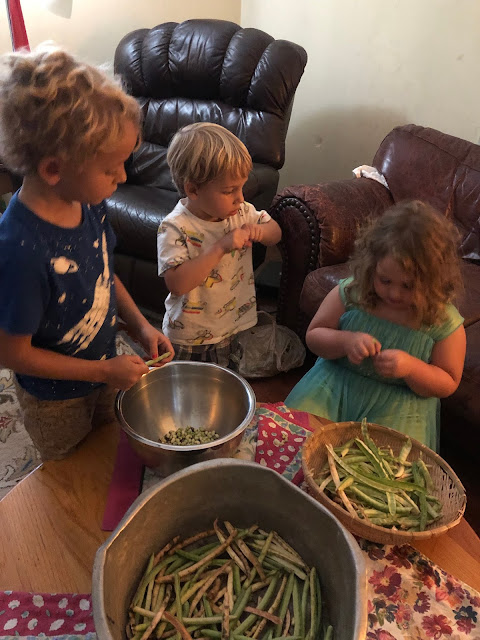 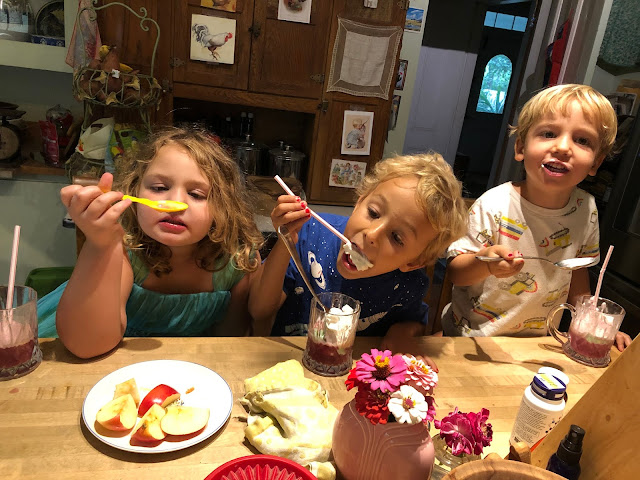 Purple Cow ingesting! It was a special occasion day for sure. 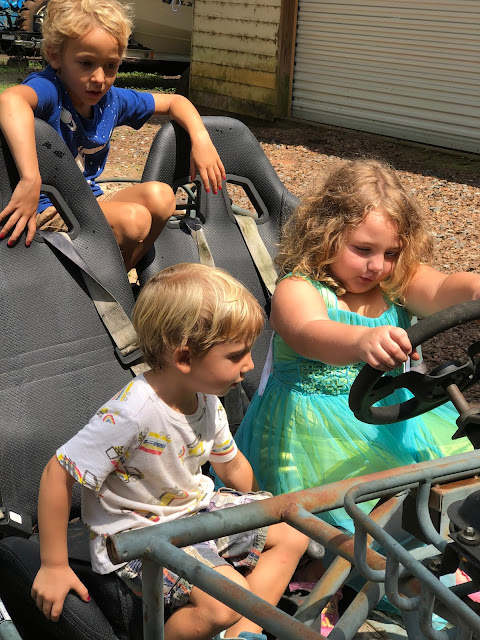 And finally, playing/pretending on the still un-fixed go-cart. They don't really need for it to run. In their minds it is a car, a truck, a tractor, an airplane. And you will notice who drives it. Ms. Magnolia is a ringleader for sure.
And so that was my day. Cleaning a fan and hanging out with grandchildren. It just felt right to have everyone back together.
They got some Boppy time too. Levon especially, who helped his grandfather cut down a dead redbud tree.
Tomorrow I believe the entire crew with the exception of May and Michael, who have to work, are going to meet up at El Patron. Lon and Lis will come too. What a week! The celebrations are endless! And on top of all of that, the high tomorrow is supposed to only be 79 degrees which is like an arctic front for us at this point in the summer. Could life BE any better?
I think not.
Love...Ms. Moon
Posted by Ms. Moon at 5:50 PM