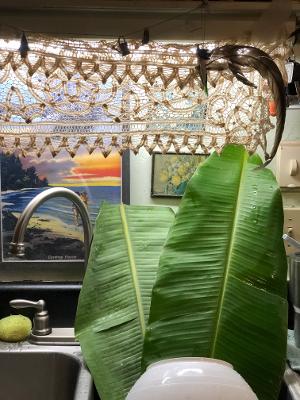 Well. Here we are. How are you? I have banana leaves in my dish drainer. There is a reason. Read on.

Last night was a special sort of hell, wasn't it? I sat and crocheted like a machine on Levon's Doggy's blanket. It's almost done. I was talking to Lis this morning and I told her about it, the obsessive crocheting as I watched results come in. "It's going to be like the blanket in "Like Water for Chocolate," she said. I said, "I had exactly that thought last night. The endless blanket knit in tears."
At eleven I put down my crochet hook and my wool and said, "I have to go to bed." And I did. I wish I'd gone to bed earlier. I dreamed endlessly that the Rolling Stones were visiting in Florida and somehow, I was a friend of theirs and Mick and I spent a great deal of time discussing how to get all of them to Wakulla Springs. I told him how beautiful it was, how it was the second largest spring in the world if you measure by water output per minute (this may or may not be true), and how although I was sure that the Stones had been in Florida many, many times, they had never seen anything like Wakulla Springs. The problem was that there was no way the band and their wives and companions and children and roadies could go incognito. Of course. But I desperately wanted them to be able to see it, to swim in the springs, to know the beauty that Florida can and does hold.
And yes, Keith was there. He wanted me to make some biscuits. THAT I could do.
I never did figure out how to get them to Wakulla.
Wild rock star dreams, right?

I was not in the least surprised that there was no "blue wave." I suppose I have lost all faith in my country and its sense of decency, its ability to discern right from wrong, good from evil, sense from insanity. These feelings have only been intensified in the last 24 hours. Although the count is far from over and although it does appear that Biden has a slight edge which may well widen as all of the absentee and mail-in ballots are counted, I fear for what may happen if the numbers don't add up in Trump's favor. Of course I am even more fearful if they do but I listened to most of today's "Fresh Air" which was an interview with a writer from The Atlantic, Barton Gellman, about strategies that Trump is going to use to fight the results. You can listen to the interview here, if you want.
Oh hell. Just don't do it. It's too fucking depressing.

Everything I did today I had to make myself do. I took a walk. I ran into Pinot right outside my yard. "How you doin'?" he asked.
"I'd be a lot better if I knew that Biden had won," I said.
He looked startled. "Who won?" he asked.
"I don't know. They're still counting."
He thought it about for a minute.
"How can so many people vote for Trump?" I asked him.
"I don't know," he said. "He ain't got no heart. In all my years I ain't never seen anything like this."
"Me either." It has been established before that Pinot and I are the same age.

We talked a little more about it all, agreeing that there are indeed many, many assholes in this country. Finally I said, "Could you use some eggs?"
"Sure," he said.
And I went and got him a dozen and he thanked me and moved on down the road one way while I went the other way.

I probably did three crosswords today. I took trash. I had a stern talk with myself and then did a thorough job sweeping and mopping the kitchen and the bathroom off of it, not because I really give a damn about the cleanliness of my floor but because I knew the smell of vinegar and Fabuloso would make me feel as if I'd accomplished something.
Or at least I thought it would. I really don't care.

I'm going to cook some snapper tonight with peppers from the garden, onions, garlic and lime. I'm going to wrap that all up in banana leaves to bake. I've picked thinnings of mustard greens and arugula for a salad. Mr. Moon helped Lily with her garden again today. It is looking beautiful. Tomorrow I will go get a mammogram and then do my shopping. I will wear a mask although, not unlike the floors, I don't really give a damn right now if I get Covid or not. What's one more nightmare? Isn't that awful? It's all a little too deja vu-ey for my comfort. I felt this way after the election in 2016. What's the point? Who cares?

I know. I know. The point is to keep on for my kids. For my grandkids. Do you know how guilty I feel that I'm not able to help Lily right now when she needs it the most? She's having to oversee the kids' education and it's not easy. If I could help her, ease her burden just the slightest, it would mean so much to me, if not to her. She's with them almost all the time and not getting any breaks. It's too much.

Well. Here we are. How are you? I've asked twice now. I really want to know. Don't you wish we could all hold each others' hands right now? Close your eyes. Pretend we are. Imagine that. Imagine the strength and warmth we could pass to each other. Imagine if we all took a deep breath together and let it out together. Imagine what it would be like if each and every one of us could hold each other close for a little while. Imagine what our smiles would look like. Would feel like.

Let's be here for each other as we keep watch over what is happening in our country.