Cats And Cooking And Who I Really Am 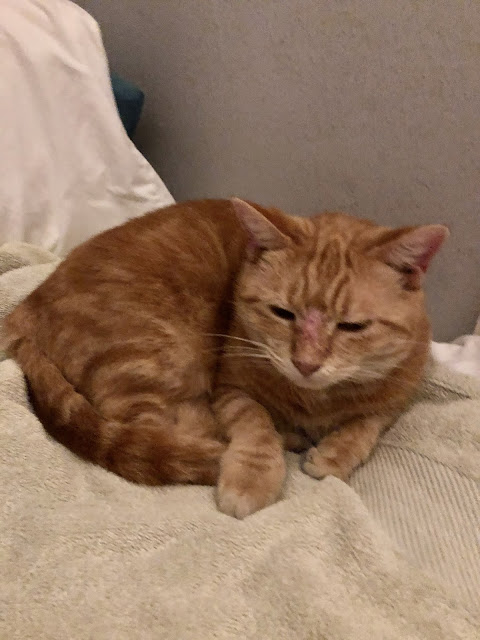 I have been lazy and slow as a sloth today but at least, unlike Maurice, I did get out of bed. That cat got on that towel-covered pillow last night around ten and did not move off of it until after three this afternoon. It's like she's decided that that is her spot, not Jack's, and there you go, boom, done.

Here's a funny thing. At least to me and please keep in mind that I am so easily entertained these days- last week I got two cat toys. Little soft stuffed balls with a bell and put them down in the hallway. Both cats have played with them but if you walk into the hall, they stare off into space and pretend they have no interest in the toys at all. I know they do because I can hear them jingle as Maurice and Jack bat them about. Not at the same time, of course. Please. Never. Just as they could never sleep on the bed at the same time.

Here's a much better and more interesting picture. 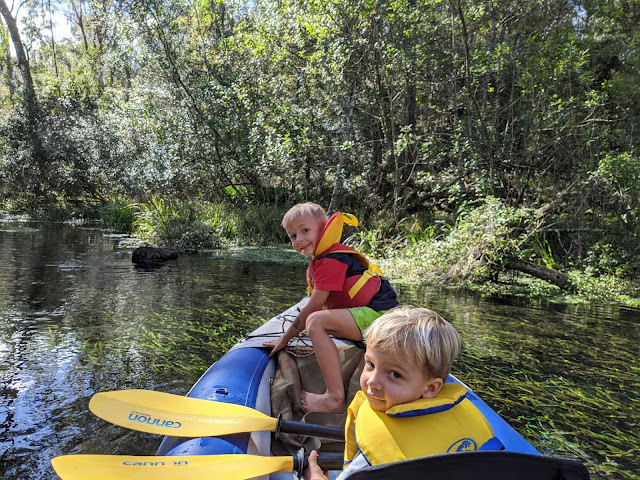 Jessie and Vergil took the boys down to the Ichetucknee River today. I think I spelled that right. It is a beautiful, beautiful river or so I have heard from many people. I myself have never paddled down it or tubed down it which is what it is most famous for. You rent a big comfy inner tube and just drift down the cold, spring-fed river and it's sort of a secret shame of mine that I've never done this. The tube rental people pick you up at the end of the ride and if that doesn't sound like heaven on a hot summer day, I don't know what is. But Jessie and Vergil took their kayaks. I bet you almost anything that Levon actually paddled. When Glen went over to their house a few days ago to shovel some compost onto their raised beds, the boys wanted to help, of course. August shoveled for about five minutes and then found something else to do but Levon, according to his grandfather, had to be told to take breaks. "He would have shoveled all day and all night!" said my husband.
That kid.
Anyway, the little family is going to stop by on their way home and eat supper with us. I think I'm going to heat up the black bean soup which was wonderful and make a salad. That'll be pleasing. I have some of last night's skillet Spanakopita left and maybe I'll share that around too. That stuff is so damn good. 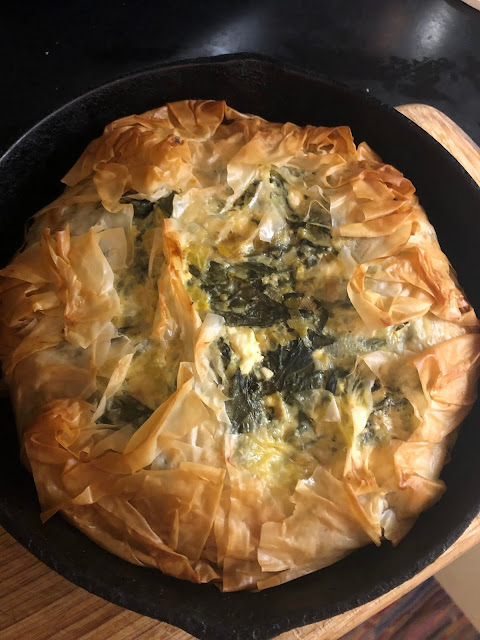 I think I posted a picture of the last one I made but this one is different because I actually had leeks and feta which I didn't have last time. I substituted shallots and goat cheese in that one and it was delicious but this one was even better. I seared a few scallops to go with it and Mr. Moon said that it was one of the best meals he ever ate.
And that's about it. It's been a Sunday which means that I've been out of sorts and flat and thinking too much about things that I shouldn't think about such as the fact that I am sixty-six years old and there's so much more I thought I would have done by now, accomplished by now, become by now.
Such as beautiful in an old wild-woman way wearing brightly colored bohemian garments made of silks and woven organic flax and inappropriately thick eyeliner and even thicker gold hoops instead of wearing stupid overalls almost every day of my life and no earrings and no eyeliner at all. I just feel faded and crepey and saggy and wrinkled and age-spotted and weary and stupid and pack-animalish.
And mostly boring.
Instead of Auntie Mame I'm Aunt Bee.
If Aunt Bee wore overalls and drank martinis and swore with abandon.
And let's face it- I've always been Aunt Bee.
Sigh.
Love...Ms. Moon
Posted by Ms. Moon at 6:07 PM