Happy Birthday, Levon! Plus Other Stuff 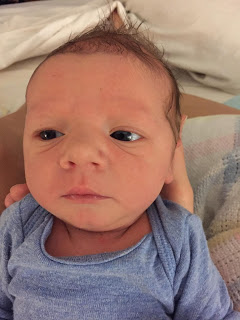 That was Levon three years ago today when he was just a few hours old. Which of course means that it's his birthday. If you would like to read about the day he was born you can go here.
I don't know about you but there is nothing I love more than a good birth story and Levon's is a fine one. It's one of Jessie's birth stories, too, of course, and I've said it before and I'll say it again- she is a birthing goddess. As is Lily.

I've been thinking about Levon's birthday for days. I have a present for him in the closet that I bought last week. Yet somehow, this morning, it completely slipped my mind. I went on a fine walk and had the glorious experience of taking down two Trump signs. One was a sign stuck into the ground on a spit of what I think is county land, definitely not in someone's yard. So I pulled it up and laid it down. The other one I pulled from the power pole in front of Mr. Lawrence's old store that someone had stapled up there. I was on my way to the post office, filled with piss and vinegar and endorphins, probably, and I just reached up on my tippy toes and snatched that thing down and threw it in a dumpster by the PO. Fuck that shit. That power pole doesn't belong to the guy who put it up there any more than it belongs to me and it's done and it's over, no matter what Donald Trump and his minions say and that is fucking THAT!

But suddenly, just as I was approaching home again, I remembered. Levon's birthday! I called his mama and it sounded like they were having a fine time. They were about to take a drive to see if they could find some heavy machinery at work because what could possibly make Levon happier? I talked to the birthday boy and said, "Happy birthday, Levon!" and he said, "Happy birthday!"

Here are a few pictures. 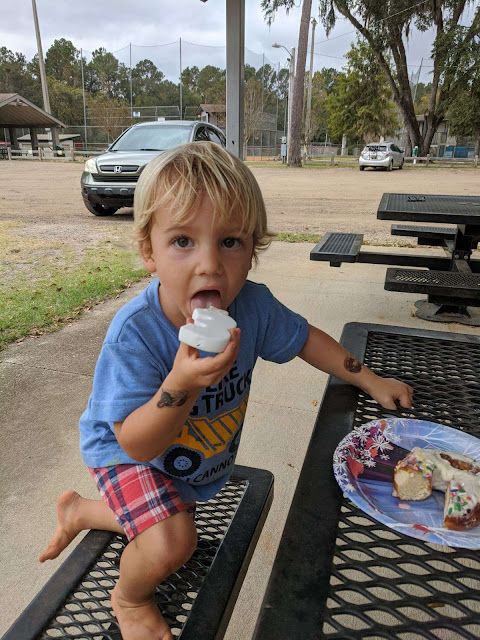 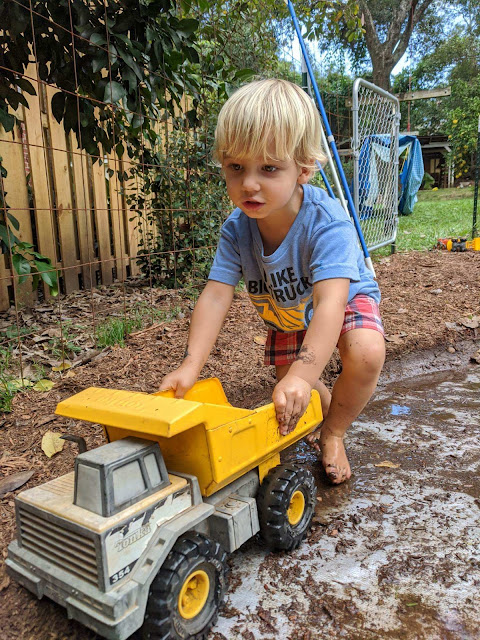 And back home to move some dirt with what I presume is a new dump truck.
Hopefully, I'll see them tomorrow and give him our present then. I got August some books, too, because it's hard to be five and not get presents when your brother gets presents.
And it's just been a good day. Last night I went into the Glen Den to find this going on. 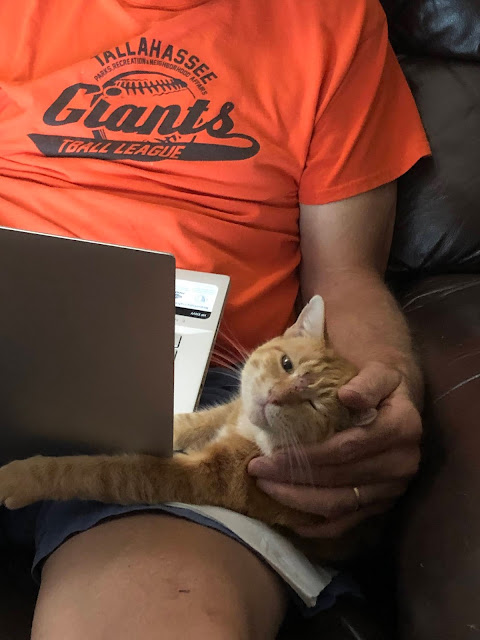 Little girl was happy to be sitting with her man-human. Or, as we call him in regards to her- Daddy. I know. It's so silly. And yet, here we are, senior citizens who call each other Mommy and Daddy around the cats. At least we don't call each other that if the cats aren't involved in whatever it is we're talking about.
Because that's just CRAZY.
And I had that walk, which was nice, and made me feel as if I'd done something and I rid the world of two campaign signs for the Orange Pretender. I found little tiny Tweety on the nest in the pump house. 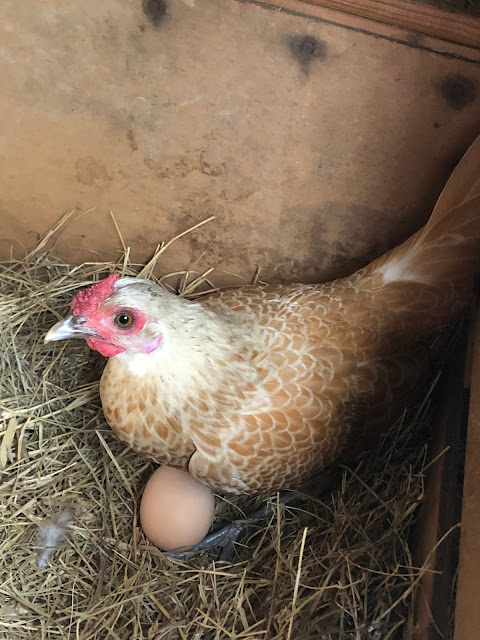 That was not her egg. 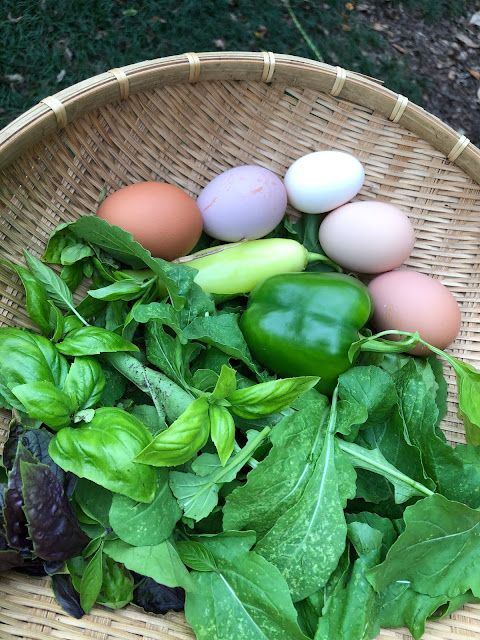 There's her egg at the top in the basket along with four others, some arugula and various basils. We're having pizza tonight.
I did a little weeding in the garden. Here is what the most micro of micro celery looks like. 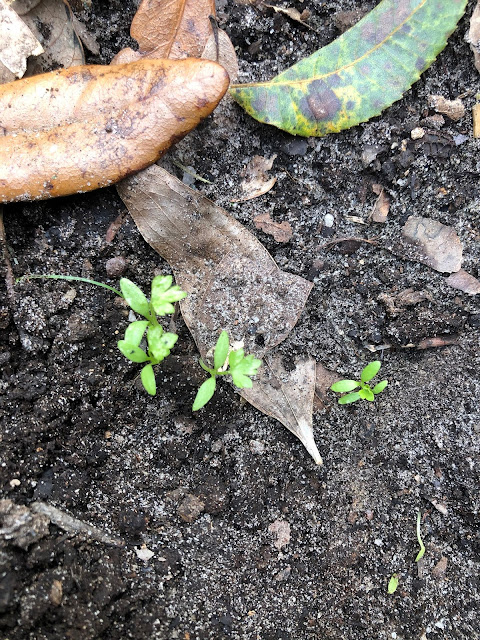 We'll see how that goes. It's not really the right time of year to grow it but what the hell?
And all is well here in my little world. Let us ignore the gaslighting being attempted by the current occupant and focus on the fact that Biden and Harris are getting their ducks all in a row so that when the federal agents have to come and remove DT from the White House, all will be in readiness.
You know what I keep thinking? That at least Melania is not going to have to decorate the White House for "fucking Christmas" this year.
Bless her heart.
Here's a very small tree frog I took a picture of last night. 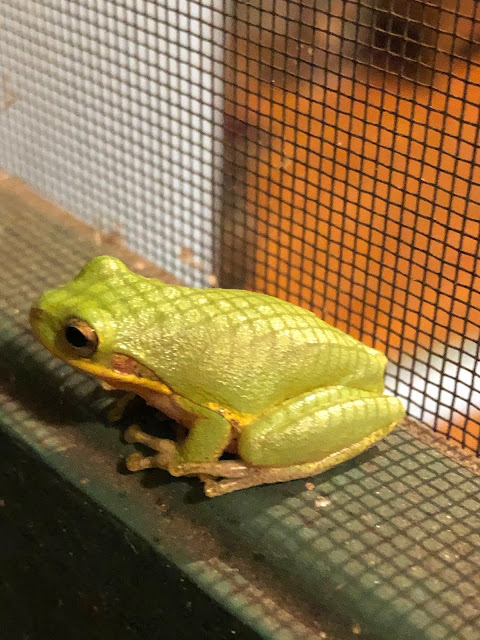 Isn't it adorable?
And in one last bit of news, there is a tropical storm in the gulf again, picking up steam and force, which will most certainly affect us one way or another by the end of the week. The forecasts are all over the map, quite literally, but we're going to get something. Y'all tired of hearing about hurricanes?
ME TOO!
Hoo boy.
Time to make the pizza.
Love...Ms. Moon
Posted by Ms. Moon at 6:24 PM